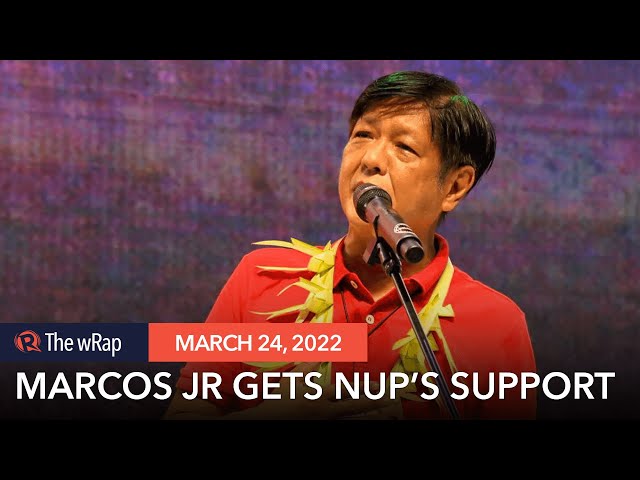 MANILA, Philippines – A night after he met with its members, the National Unity Party (NUP) announced Thursday, March 24, that it was endorsing Ferdinand Marcos Jr’s bid for the presidency.

“[Marcos Jr’s] call for unity as the basic strategy for economic recovery, amidst the continuing COVID-19 pandemic and global uncertainties, is consistent and supportive of the NUP’s primary vision of ‘one nation, one future’ as enshrined in the Party constitution,” the party said in a statement released through its spokesperson and deputy secretary general Reginald Velasco.

“We call upon all our Party members to join hands with former Senator Marcos in bringing our country and people to continued prosperity and progress,” the party added.

On Wednesday evening, March 23, Marcos Jr joined members of the party in a meeting. Those present in the meeting, based to a post by Cebu 5th District Representative Duke Frasco, included Majority Floor Leader Martin Romualdez, Marcos Jr’s cousin and president of Lakas-CMD. Romauldez is also the campaign manager of Davao Mayor Sara Duterte, who is Marcos Jr’s running mate.

On Instagram, Frasco said Marcos “thanks members of the [NUP] for their support of #BBMSara2022,” referring to the Uniteam tandem of Marcos Jr and Duterte.

NUP was one of the parties who, pending Duterte’s final decision on what to run for in 2022, were left in limbo. Before finally deciding to run for vice president, Sara Duterte led early presidential preference surveys. She had also initially filed her candidacy to be reelected as Davao City mayor, but in a span of a few days she withdrew her Davao candidacy, joined Lakas-CMD, and filed her paperwork to seek the vice presidency.

NUP has been an ally of Hupong ng Pagbabago, the party Sara Duterte founded ahead of the 2019 midterm elections. It also allied with PDP-Laban, the ruling party headed by Sara’s father President Rodrigo Duterte, after the 2016 polls. PDP-Laban has since also endorsed Marcos Jr after initially “adopting” Sara Duterte as its vice presidential bet.

Asked if the alliance between NUP and HNP still stands, Velasco said it does “although it covered only the joint efforts of the two political parties relative to the 2019 elections.”

The NUP endorsement comes a day before the official campaign period begins for local bets. According to Velasco, NUP counts as its members 40 incumbent legislators and 10 governors. In 2022, the party is fielding 59 Congressional bets, 12 candidates for governor, and “over a thousand” candidates in different local government units.

Alliances with local candidates – either as individuals or as parties – are crucial for any national candidate. With only a total of 90 days in the official campaign period and, as of posting, only 46 days left, local allies will be crucial in helping national bets court more votes or solidify its existing base in the area.

In 2016, NUP members were allowed to virtually choose whomever they wanted to support for president. – Rappler.com