The Senate and the House of Representatives led by Senate President Vicente Sotto III and Speaker Lord Allan Velasco, on May 24, 2022, convened as National Board of Canvassers that will count the votes cast in the May 9 national elections and proclaim the President-elect and Vice President-elect.

Facebook Twitter Copy URL
Copied
Even as a handful election officers apparently send the wrong election document, the counting goes smoothly, thanks in part to Zoom and Viber. After all, none of the trailing candidates in the presidential race contested the counting.

MANILA, Philippines – It’s a few minutes shy of 9 pm on Tuesday, May 24, and, for the most part, the official count for the presidential and vice presidential race at the Batasang Pambansa is going atypically smoothly.

After over seven hours of the same thing – Senate or House officials opening sealed ballot boxes, documenting out loud what’s in it, comparing it to the electronically transmitted version, before the vote tally on each Certificate of Canvass (COC) is encoded onto Congress’ tally – there’s another hitch. The COC for Sultan Kudarat, a province in Mindanao, was missing.

A visibly exasperated Senate Majority Leader Miguel Zubiri, chairman for the Senate panel in the joint committee canvassing the results, began berating the Commission on Elections (Comelec) for all of Batasan and livestream viewers to see.

“They have only one job, and one job to do, the PES (provincial election supervisor) – which is to insert the COCs of the results of the president and vice president into a ballot box and deliver it to the Senate. One job and one job only. How can they be remiss of that job that’s constitutionally mandated of them to do?” he said. The same night, three other COCs were missing from ballot boxes – from Surigao del Sur and Pampanga.

Zubiri’s visible frustration was the only real emotional moment of the evening as Congress, convened as the National Board of Canvassers (NBOC), counted votes for the two highest posts in the land.

The counting, which began at around 2 pm on May 24, ended at around 11 pm the same day with over 105 COCs counted. At the rate they were going, Congress was set to proclaim presumptive president Ferdinand Marcos Jr and presumptive vice president Sara Duterte before evening the next day, Wednesday, May 25. The tone for the official count was set early – on the evening of May 9, election day. The Comelec transparency server, which shows the partial and unofficial count based on real-time transmissions from vote-counting machines (VCMs) around the country.

Hours after polls closed, Ferdinand Marcos Jr., who campaigned on the promise of unity sans detailed platforms, was the apparent runaway winner in the presidential race, leading his 2016 nemesis Vice President Leni Robredo by almost twice the number of votes at one point. Davao City Mayor Sara Duterte was even more dominant in the vice presidential race, getting more than thrice the votes of her closest rival, Senator Francis Pangilian, Robredo’s running mate.

Hours past midnight on May 10, Robredo in Naga City made a statement that, while stopping short of a concession, made clear she knew who was winning the presidential race.

(Even as some votes have yet to be counted; even as we continue to ask questions about this election: The people’s choice is becoming clearer and clearer. For the sake of the Philippines, whom I know you love too: We must listen to the people’s voices because in the end, we live in the same country.)

It was these words, as well as portions of Robredo’s speech during a thanksgiving rally, that veteran election lawyer Romulo Macalintal quoted in telling Congress they would accept all valid COCs in the canvassing. Manila Mayor Isko Moreno’s legal team made the same pronouncements, with his lawyer saying his camp “[recognizes] the integrity of the 2022 national and local elections. 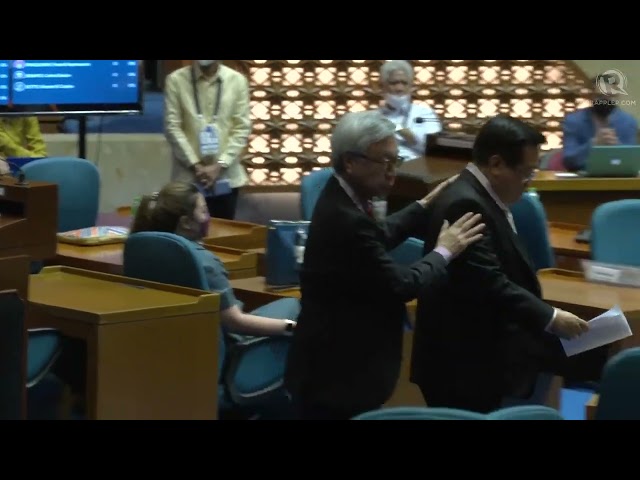 Vic Rodriguez, Marcos Jr.’s spokesperson and incoming executive secretary, thanked both Macalintal and Robredo herself in a short response. Addressing her as Vice President for the first time, at least in the 2022 election cycle, Rodriguez praised her “patriotism…for expressly recognizing the integrity and the result of the recently-concluded general elections.”

Majority Speaker Martin Romualdez, who is Marcos Jr.’s cousin and co-campaign manager to Sara Duterte and is poised to be House Speaker when the 19th Congress opens, returned to the rhetoric of unity in thanking both the Robredo and Moreno camps.

“Indeed the theme of the Uniteam begins to pervade in the country. The healing has begun, let us unite as a nation for and by the Filipino people,” he said, as canvassing began.

When COCs were missing from ballot boxes, the process was swift – one of the chairs would manifest that the election supervisor dial in via Zoom. On Zoom, too, they’d swear under oath that the digital copy of the COCs – sent via the messaging app Viber, was authentic. In the case of Surigao del Sur, election officials had apparently mailed in the wrong document, with the ER still in the office. As long as the figures in the photo of the physical COC sent via Viber matched the electric certificates, all was good.

The 2022 canvass for president and vice president is poised to be the fastest in Philippine electoral history.

In 2016, the count took three days even as then-vice presidential candidate Marcos’ team promised to challenge every COC in the count. Both Duterte and Robredo were proclaimed the winners the Monday after canvassing concluded, albeit only Robredo – then a member of the House – showed up in person to be proclaimed.

In contrast, the 2022 count is likely to wrap up in two days, with Marcos and Duterte’s proclamation happening before the sun sets on May 25.

The announcement of Robredo and Moreno’s legal teams that they would not contest the valid COCs in the count didn’t exactly bode well with the online crowd, particular online users who campaigned and voted for Robredo. Citing the alleged instances of electoral fraud and cheating, many wondered why her team had cleared the path for Marcos’ proclamation.

But what they’re missing is the fact that Congress, as the NBOC, cannot judge on allegations of voting fraud. “We cannot rule on whether or not there is cheater, there is alteration… because we are not allowed to do that,” said Senate Minority Leader Franklin Drilon in a media interview on the sidelines of the canvassing.

Drilon, a staunch Robredo ally and an outgoing member of the Senate, cited the 2004 count – of the controversial presidential contest between former president Gloria Macapagal Arroyo and the late movie star Ferdinand Poe – in explaining why he didn’t see “any point of disagreement” in the 2022 count. 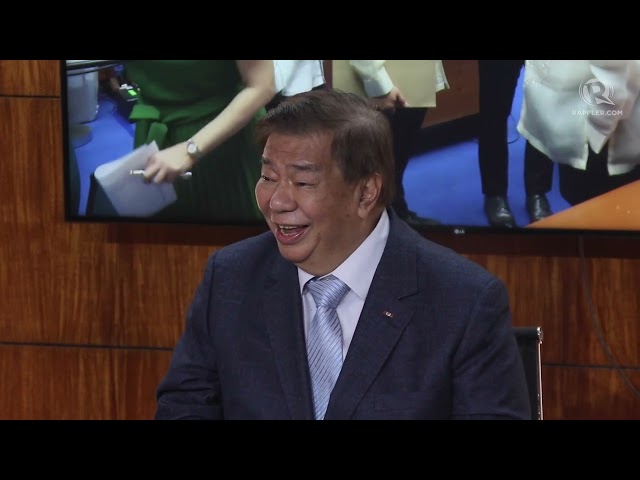 “There was so much tension because of the possibility of no president being proclaimed…. It was so tense at that time that I received a lot of requests – and for the first time, I will reveal this – not to proclaim [Arroyo] because of the questions raised in the COCs,” he said. As the opposition then questioned election returns (ERs), crying fraud, Senator Francis Panglinan infamously replied: “Noted.”

Pangilinan defended ​​the move then with the same explanation: Canvassers cannot rule on alleged cheating because that’s the job of the Presidential Electoral Tribunal.

Senate President Tito Sotto, then a member of the opposition, made a reference to 2004 as well in a separate press conference on the sidelines of the joint session. “Dapat resolved lahat ng problema – walang basta ‘noted’ lang. Walang ganoon. I will not allow it,” he said.

(All problems [about COCs] must be resolved. We can’t just go with “noted.” That’s unacceptable. I will not allow it.)

Years later, in 2011, Pangilinan would issue a statement calling on both Comelec and the Department of Justice to probe allegations of fraud against Arroyo in 2004. Drilon also joined calls to probe those allegations years later.

While no challenges were made during canvassing, Marcos does face challenges to his candidacy before the Supreme Court. While the incoming president and vice president’s earworm of a campaign song proclaimed a “new Philippines” of “new faces,” the lineup of canvassers and of incoming key administration officials, as is typical in Philippine politics, would argue otherwise.

Many of the canvassers in 2004, the last presidential election to be conducted manually, are personalities once more in 2022. Drilon was a key figure in Robredo’s 2022 run, while Pangilinan was her running mate. Sotto, campaign manager for Poe in 2004, ran for vice president in 2022.

Arroyo, who will be returning to the House, is seen as having played a key role in Marcos and Duterte’s win, both in forming the tandem and in negotiating local alliances for the Uniteam slate.

Zubiri and Romualdez, the NBOC chairpersons in Batasan, are poised to capture the highest posts in their respective chambers, although Romualdez seems to have it in the bag more. The two will be remembered for chairing a record-breaking vote count.

The 2022 polls recorded many more firsts: the first tandem to be elected into power since 2004, the first majority president and vice president, and the first election where systematic online disinformation became a tool in aiding a campaign.

As canvassing was finally put to a pause on day 1, after both Zubiri and Romualdez praised colleagues and staff for their fast pace, a booming voice echoed through the livestream: “Mabuhay! Mabuhay ang demokrasya (Long live! Love live democracy)!” – Rappler.com