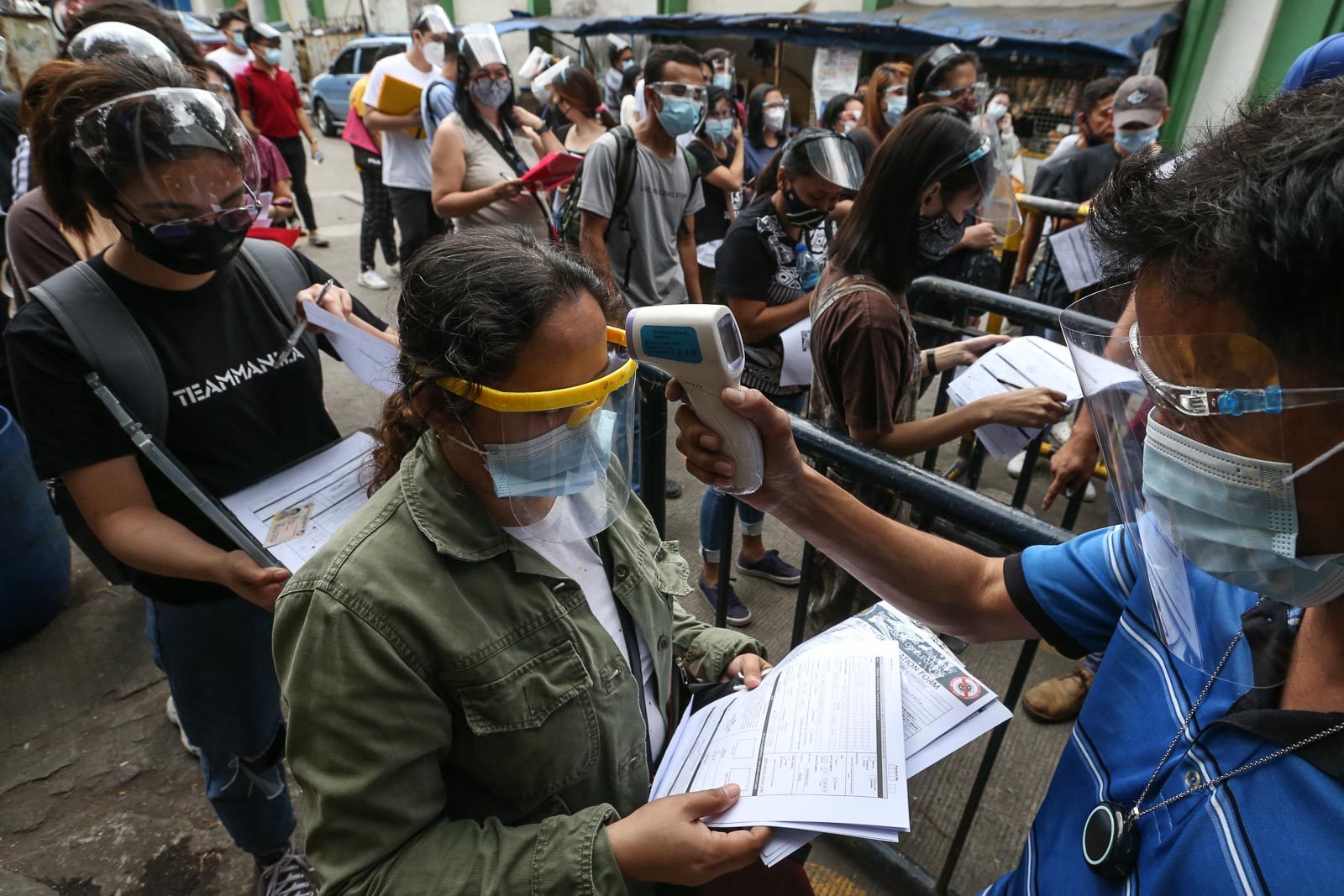 REGISTRATION. New voter applicants fill up a health declaration form prior to their registration at the Comelec office in Arroceros, Manila, February 20, 2021.

Facebook Twitter Copy URL
Copied
This means first-time voter applicants only have, at most, 30 days left to register for the 2022 polls

Voter registration in the National Capital Region (NCR) and two other provinces is expected to remain suspended until August 31, even as they transition to a looser lockdown classification.

Metro Manila and Laguna will shift from enhanced community quarantine (ECQ) to modified ECQ on Saturday, August 21, while Bataan will do so on Monday, August 23. That classification will last until the end of the month.

A resolution by the Commission on Elections (Comelec) in August 2020 states that voter registration can only resume in areas that have transitioned to general community quarantine or modified GCQ – the two least stringent of the four lockdown classifications in the Philippines.

“The resumption of the system of continuing registration of voters shall commence on September 1, 2020, except in areas declared under ECQ or MECQ,” the Comelec resolution read. Voter registration for the 2022 polls began in January 2020 but was suspended indefinitely in March of the same year due to the pandemic.

The MECQ classification in Metro Manila, Laguna, and Bataan means that first-time voter applicants only have 30 days left at most to register for the 2022 polls, should the said areas be placed under GCQ or MGCQ by September 1.

It also means that the metropolis and the two provinces have yet to benefit from the longer voter registration hours set to be enforced by Comelec beginning Monday.

The Comelec already decided against extending the September 30 voter registration deadline by at least a month due to operational concerns, despite mounting calls from lawmakers and youth groups.

A day before the announcement of new lockdown classifications, the poll body had said its decision took into consideration the possibility that voter registration might remain suspended in Metro Manila should the strict lockdown be extended beyond August 20, the expiration date of the ECQ in the region.

“Under our general guidelines, there is no voter registration in areas that are not under GCQ or MGCQ, so we are going to have to get back to GCQ or MGCQ in order to resume registration,” Comelec spokesman James Jimenez added on Wednesday, August 19.

Despite the poll body’s announcement, lawmakers, watchdogs, and youth groups have urged the Comelec to “reconsider” its decision.

They pointed out that  some areas that were under ECQ or MECQ multiple times have lost many months that could have been used for voter registration.

They also argued that the Philippine Statistics Authority’s projected voting population for next year is 73.3 million. Comparing this to the 60 million already registered, they fear that 13.3 million who are qualified could be disenfranchised. – Rappler.com