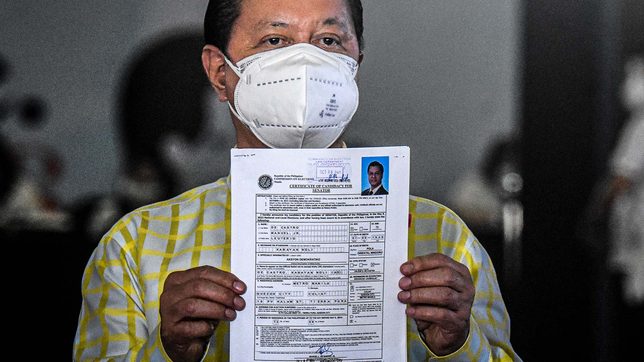 NOT PUSHING THROUGH. Media broadcast personality Noli de Castro files his certificate of candidacy for senator in the May 2022 national elections, at the Sofitel hotel in Pasay City on October 8, 2021.

In a call with Rappler, Ramel said De Castro is withdrawing his certificate of candidacy for senator merely a week after filing it before the Commission on Elections (Comelec).

Aksyon, the party which De Castro just joined in relation to his senatorial bid, said the newsman decided he could serve Filipinos better by continuing to work in the news industry, rather than in politics.

(Along with prayers to the Black Nazarene, I thought I would be of better help giving voice to our countrymen through working in news.)

The Comelec confirmed later on Wednesday that it had already received De Castro’s statement of withdrawal.

“All statements of withdrawal for national positions received by the Law Department must comply with Comelec rules and regulations, and are still for submission to the Commission En Banc for resolution,” Comelec spokesman James Jimenez said in a press release.

Moreno, in a Kapihan sa Manila Bay press conference on Wednesday, said De Castro gave a “personal reason” for dropping his Senate bid but said he was not at liberty to state the reason in public.

It may also portend another round of anchor reshuffling in ABS-CBN. After deciding to run for senator, De Castro resigned from the network for whom he had been anchoring three programs – TV Patrol, Kabayan, and TeleRadyo Balita.  – with a report from Dwight de Leon/Rappler.com