Nobel Peace laureate and Rappler CEO Maria Ressa and acting Comelec chairperson Socorro Inting lead the ceremonial signing of the memorandum of agreement between Rappler and the Comelec at Intramuros, Manila on February 24, 2022, for a series of projects in the run-up to the 2022 elections. Also present are Comelec spokesperson James Jimenez, Commissioner Aimee Ferolino, Commissioner Rey Bulay, and Rappler executive editor Glenda Gloria.

Facebook Twitter Copy URL
Copied
The Comelec, however, says it is still preparing to defend in court the agreement it signed with Rappler despite suspending the deal after Solicitor General Jose Calida's actions 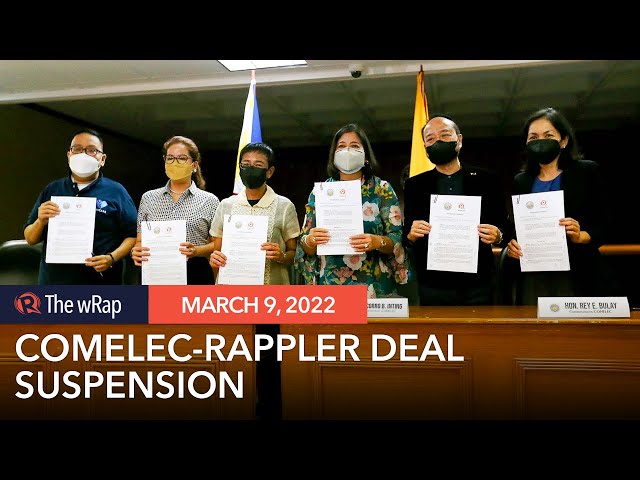 The hold order signed on Tuesday, March 8, by then-acting chairperson Socorro Inting was in response to the Office of the Solicitor General’s pleading to the Supreme Court to void the partnership deal.

Her memorandum was contrary to her statement a day prior that the Comelec will “face the music” and defend the case in court despite Solicitor General Jose Calida’s actions.

For former Comelec commissioner Luie Guia, it would have been better had the Comelec gone on with the agreement until a court order was issued against it.

“That way, it could have avoided the impression that it was unsure of the legality or wisdom of its actions or, worse, had succumbed to the pressure of the solicitor general, thus, compromising its independence,” he told Rappler on Wednesday.

“The things that Calida raised are actually not new, these are issues that were raised before. I’m pretty sure before the Comelec signed the partnership, at the very least, they are expected to do due diligence,” Marañon told Rappler.

Calida, in his Supreme Court pleading, falsely argued that Rappler is a foreign entity, and even cited a closure order from the Securities and Exchange Commission (SEC) to make the case against the news organization.

But Calida is mistaken, because the SEC said in 2018 that Rappler can continue operating until its order becomes final and executory. The Court of Appeals has not resolved the case and Rappler continues to operate.

“The Comelec always enters with media people an arrangement for them, and it’s fact-checking,” Monsod said in an interview with the ABS-CBN News Channel (ANC). “I think in terms of credibility, Rappler and the Comelec have a higher credibility than Mister Calida.”

Under the agreement with the Comelec, Rappler will mobilize its fact-checking network, which is a collaboration among 14 newsgroups and over 100 civil society organizations. Rappler, for instance, will alert the Comelec about false and misleading election-related claims on social media.

Calida, in his Supreme Court pleading, argued that fact checks violate free speech, and that the “power granted by Comelec in favor of Rappler clearly constitutes prior restraint on freedom of speech and of expression.”

The pleading oddly makes use of the constitutional principle of prior restraint, which usually protects free expression from government restrictions.

“Fact-checking is related to the journalistic principle of truth-telling. At a time when there’s too much disinformation on the web and in real life, we have to appreciate the fact-checking initiatives of various groups,” Kontra Daya convenor Danilo Arao also told ANC.

Later on Wednesday, the Comelec denied it flip-flopped on the agreement and said it is still preparing to defend the agreement in court.

“We are simply suspending the implementation of the memorandum of agreement, we are not abrogating it. There’s no reversal here or a [late] realization [by the Comelec],” Comelec spokesman James Jimenez told reporters.

“The Comelec is still going to defend its position on the Rappler memorandum of agreement, except that, with the case having been filed with the Supreme Court, there is of course the element of deference to the Supreme Court, which is why we are pulling back a little,” he added. 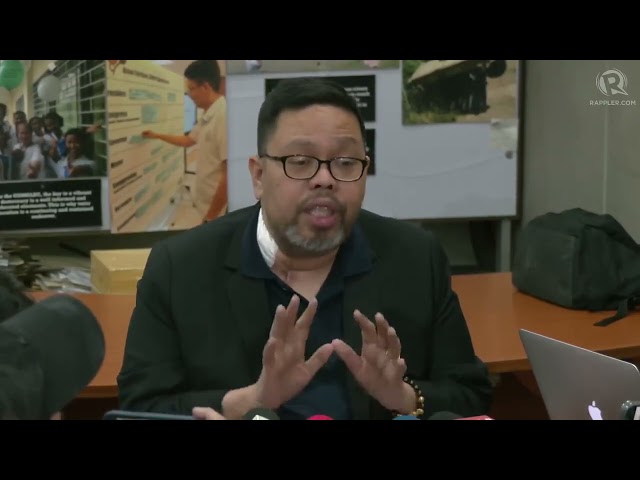 Jimenez, however, tried to minimize the impact of the suspension of the agreement on fact-checking efforts in the run-up to the elections.

“There is a misconception that the Comelec is entirely dependent on Rappler for offenses or initiatives against misinformation. That is not true. The Comelec itself is working with social media platforms to make sure we’re able to move against disinformation on those platforms,” he added.

In a statement on Tuesday night, Rappler found it unfortunate that Inting unilaterally set the agreement aside.

“It is equally lamentable that Rappler, as the other party to the agreement, was not officially informed about Commissioner Inting’s memorandum beforehand. Instead, the information and memo were leaked to a TV station associated with disinformation and online attacks on journalists and independent media,” Rappler said.

“This decision is based on the false and unsubstantiated claims of the Solicitor General, who is obviously acting on behalf of partisan interests that are being threatened by Rappler’s independent reporting,” it added.

Calida has a history of using the resources of his office to go after perceived critics of the Duterte administration. He initiated the SEC investigation into Rappler, and pushed for the shutdown of media giant ABS-CBN in 2020.   – Rappler.com