Nur Misuari’s office clarifies he did not endorse Pacquiao 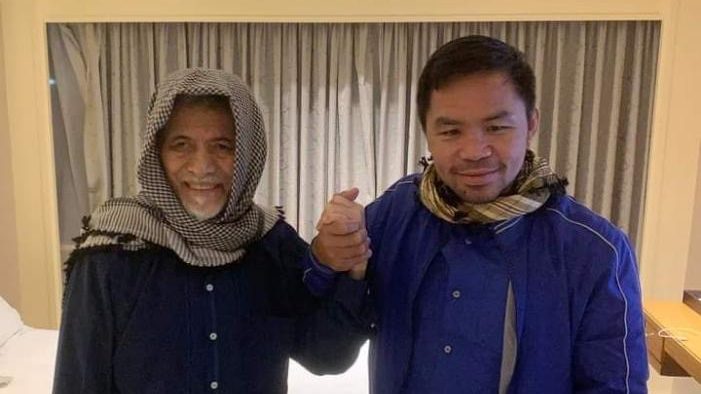 NOT AN ENDORSEMENT. Presidential bet Manny Pacquiao meets with MNLF chairman Nur Misuari in a hotel in Manila on April 18, 2022.

The MNLF Central Committee said in a statement on Saturday, April 23, that the boxer-turned-senator merely had a courtesy call on Misuari on April 18.

“The picture circulating online of Chairman Nur Misuari with Presidential aspirant Sen. Manny Pacquaio is not an official endorsement for his candidacy. It was a courtesy call by the good Senator to the Chairman at Dusit Thani Hotel in Makati before the Chairman’s upcoming trip abroad,” the office said.

Misuari’s office added that the MNLF chair remains “neutral” and has yet to endorse a candidate for the May 9 polls.

Misuari’s office said he “maintains an open-door policy to all presidential candidates who wish to share their visions and platforms with him, especially those which relate to the Bangsamoro people and for peace and development of the entire nation.”

After Pacquiao avoided journalists following the the Easter Sunday briefing of some male presidential candidates that he was supposed to join, the senator met with Misuari on April 18. A photo sent to reporters showed that Misuari raised Pacquiao’s hand – a gesture associated with supporting or endorsing a bet.

But Misuari’s office shared photos of the MNLF chair raising the hands of other people who had courtesy calls on him.

Pacquiao said that the support from the MNLF chair is important to him. The former rebel movement still holds influence in Muslim-dominated provinces such as Sulu and Tawi-Tawi. The governors of both provinces, however, have already endorsed presidential bet Ferdinand Marcos Jr.