Pacquiao in KBP forum: Big on promises, short on details Facebook Twitter Copy URL
Copied
Senator Pacquiao wants to push for all things nice – fewer taxes, more freebies from the government, and become a debt-free country. How can he fund all that? 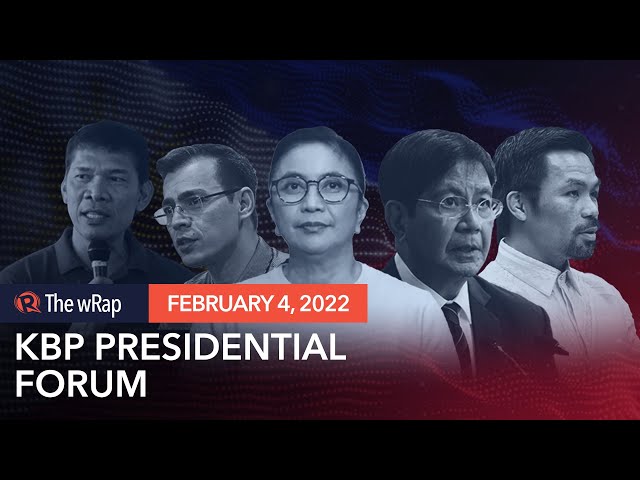 MANILA, Philippines – From his glorious boxing days to his uphill bid for the presidency, Senator Manny Pacquiao never fails to show how ambitious he is. This time it can be seen in his lofty dreams for the country if he is elected president.

During the presidential forum hosted by the Kapisanan ng mga Broadkaster ng Pilipinas (KBP), Pacquiao on Friday, February 4, presented a glimpse of what he will do if elected. He presented his so-called “22 rounds agenda” which was a bit overwhelming and was merely skimmed.

From stopping corruption, to free housing, to salary increases, Pacquiao has all these on his agenda. But despite this being a long list, the senator said he will focus on the “health of the nation,” which stands for the following:

In short, the boxing-icon-turned-politician wants to push for all things nice – fewer taxes for corporations, more freebies from the government, and a debt-free country with good infrastructure and utilities.

But these are big promises.

Pacquiao was asked: How exactly does he plan to fund these programs?

The senator, who had one minute to explain, pointed to strengthening non-tax revenue income, but he failed to elaborate on what he intended to do with it exactly. He did the same thing when asked about the topic in previous interviews and fora.

Non-tax revenues are collected from government services and licensing fees, as well as dividends and profits from government-owned and controlled corporations, investments, or state resources such as the Malampaya gas field.

Pacquiao added that non-tax revenue income only contributes 6% on average to the government’s sources of income annually.

[WATCH] In the Running: Panel discussion on the KBP presidential forum 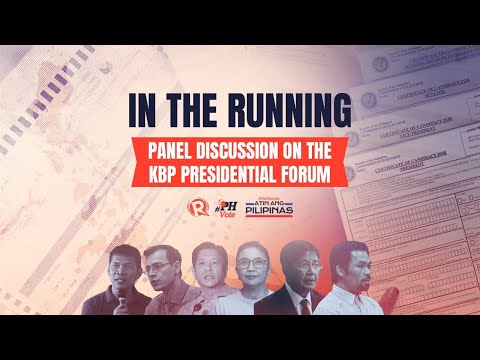 According to the data compiled by the Congressional Policy and Budget Research Department at the House of Representatives, non-tax revenues’ share reached 12.3% at P351 billion in 2020.

Compared to our peers in the ASEAN-6, the Philippines ranked the lowest at 1.5% non-tax to gross domestic product ratio in 2018. Singapore is at 4.5%, while the average in the region is around 3% in the same year – save for absolute monarchy Brunei which has a ratio of 33% on the average from 2014 to 2016.

The contribution of non-tax revenue income has been historically low, so it remains to be seen how exactly Pacquiao intends to grow that.

‘Culture of corruption’ in doling out cash

Every candidate had his fair share of hard questions during the forum. For Pacquiao, it was about his practice of doling out cash.

In every sortie, Pacquiao had given out money, relief packs, sacks of rice, or other giveaways. This is Pacquiao’s brand of generosity – a trait he has embraced since he rose to the stars starting in 2002.

In one instance, Pacquiao was even recorded handing over P1,000 to each attendee.

For a candidate who is running after corrupt politicians, One News’ Roby Alampay asked: “‘Yung pagbibigay ng pera habang eleksiyon, hindi ba ‘yan dumaragdag sa kultura ng korapsyon?” (You giving out money during election season, does not that contribute to the culture of corruption?)

But Pacquiao does not see anything wrong with it. Instead,he zeroed in on the technicality.

“Wala pa pong eleksyon. ‘Di pa po ako under sa batas. Kaya po sinasamantala ko… Hindi po ako lumalabag sa batas,” he said. (It’s not yet election. I am not yet covered by the rules. That’s why I’m taking advantage of it. I am not violating any law.) In 2021, the senator promised to stop giving out aid when the campaign season starts on Tuesday, February 8.

Technically, doling out cash is not considered vote buying nor as an election offense if done outside of the campaign period. Commission on Elections spokesperson James Jimenez earlier said that in the context of the 2022 polls, what Pacquiao has been doing is “wrong.” – Rappler.com