‘We rely on our own’: Pacquiao campaign manager says election day budget tight 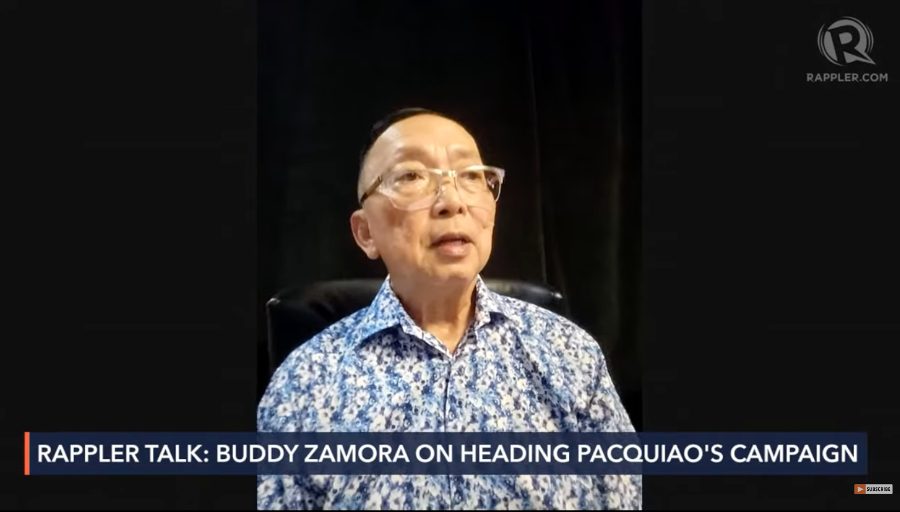 Facebook Twitter Copy URL
Copied
'We just rely on our own. We are faith-based. We say, God will provide,' says Buddy Zamora

MANILA, Philippines – The campaign manager of presidential candidate Manny Pacquiao said on Tuesday, April 19, that the team’s budget for election day is “tight,” but they believe that “God will provide.”

In a Rappler Talk interview, Pacquiao campaign manager Salvador “Buddy” Zamora said the campaign did not receive “much [financial] support.” 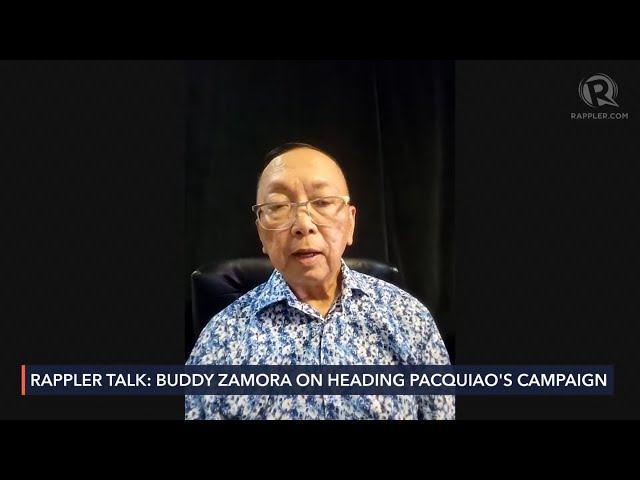 But Zamora said this works well with them anyway, so they avoid being “beholden” to campaign donors.

“It’s so difficult to be dealing with governors and mayors. They will be beholden to those who deal with the funds. We are at a disadvantage because we are operating on personal funds of the senator and myself,” Zamora said.

He added: “I would say, at this point, we haven’t received much [financial] support from other businessmen or groups. We just rely on our own. We are faith-based. We say, ‘God will provide.'”

Zamora said that P500 million would be a “good estimate” for expenses on May 9. He said, “Of course, the more, the better.”

He added the Pacquiao team would be relying on volunteers to help them watch the polls.

“We rely on our volunteers, we rely on religious groups to support us on election day and to watch over our votes.… I think more in terms of warm bodies. We will have to provide the basic meals [and] transportation. We’re running on a very tight budget,” he said. Zamora told Rappler that there were people who approached him, asking if Pacquiao would withdraw from the race.

“I don’t know who has approached Senator Pacquiao. In my case, I’ve been approached several times, if there is a possibility of us backing out. I don’t see any logic of running a campaign and then backing out at the last minute,” he said.

Asked about which camp supposedly asked him, Zamora said: “The logical team to ask that is No. 2, so that if we were to add our numbers to theirs, perhaps, they’re nearer to the No. 1, as portrayed in the surveys. That is not our concern, that is their concern.”

Zamora, without naming names, seemed to refer to the camp of Vice President Leni Robredo, who is behind dictator son Ferdinand “Bongbong” Marcos Jr. in pre-election surveys.

“We’ve heard several blogs saying that they are actually waiting for us to withdraw in a matter of hours, but I can assure you that these are fake news and these are just rumors based on speculation,” he said.

Zamora, however, admitted that Pacquiao would still be the one to call the shots on this matter. Withdrawal may still happen if Pacquiao decides to do so, in the event he “receives a sign from God,” as the presidential bet earlier said.

“Yes, he relies on divine guidance all throughout.… It’s his decision to make. I’m not the one running. I’m just a Freddie Roach,” said Zamora, who referred to Pacquiao’s former boxing coach.

But what made Pacquiao keep going is his team’s internal surveys.

Zamora said that the team had commissioned two independent survey firms to conduct face-to-face interviews, following the “traditional” sample size of 1,200 to 2,400.

“Not that others will believe it, but we tend to believe it because of the turnout we’re getting as we travel around the country,” he said.

So far, Pacquiao’s largest rally was in Dumaguete City, where organizers said as many as 80,000 people attended. Police in the area said, however, that the capacity of the venue was only 14,000 at most.

Zamora compared Pacquiao to another presidential bet, whom he did not name yet the description fits Marcos Jr..

“Wherever we go, people come spontaneously, unlike the other groups, where they have been caught on camera distributing money,” he added.

Pacquiao himself had handed P1,000 bills, relief packs, and bags of rice to residents and supporters ahead of the campaign period. He promised to stop giving cash aid starting February 8.

Meanwhile, in a Uniteam sortie in Nueva Ecija, the media caught the distribution of envelopes with P500 bills inside the venue just after Marcos had left. Nueva Ecija Governor Aurelio Umali justified the act as distribution of “ayuda” or financial aid. – Rappler.com