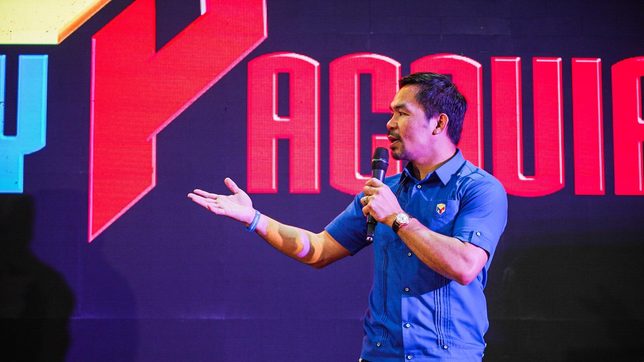 NO TO ENDO. Presidential bet and Senator Manny Pacquiao visits Batangas in October 2021.

Presidential aspirant and Senator Manny Pacquiao said that he wants the “end of contract” or endo scheme to end in workplaces if he is elected president.

In a meeting with the Rotary Club of Manila on Thursday, November 4, Pacquiao was asked about his plans for the labor sector.

He said that he wants the anti-endo bill to be “reviewed,” having experienced being a laborer himself for most of his youth.

It will be recalled that the bill was passed by lawmakers during the 17th Congress, but was vetoed by President Rodrigo Duterte before it lapsed into law. In the 18th Congress, the bill was stalled, even if it was part of Duterte’s campaign promises.

The labor groups’ main issue with the version of the security of tenure bill at the time was that it was “weak.” Business groups, meanwhile, had said it was “redundant.”

When the bill was passed on final reading at the Senate, Pacquiao was not around. However, this stance does not come as a surprise as Pacquiao endorsed the Senate bid of veteran labor leader Elmer Labog.

Labog, the chairperson of labor group Kilusang Mayo Uno, had been vocal about the “betrayal” workers felt when Duterte vetoed the measure.

While Pacquiao has yet to lay down the details of his anti-endo promise, Labog has since made his position clear – that all forms of contractualization should be abolished.

Asked about his fiscal policy, Pacquiao said that he does not subscribe to the idea of deficit spending. That type of policy essentially makes the government borrow money as income is lower than what the country needs to spend under the annual budget.

From January to September, the Philippines’ budget deficit widened to P1.14 trillion. Economic managers expect the fiscal gap to reach a record P1.85 trillion or 9.3% of the gross domestic product by the end of 2021.

As of September, the Philippines’ debt rose to P11.92 trillion.

To “solve” that, Pacquiao said that the government needs to strengthen non-tax collections. Non-tax revenue could be collected from dividend payments from government-owned and controlled corporations (GOCCs) or from state resources as such the Malampaya gas field.

(Non-tax revenue income should be strengthened so we can lower the country’s taxes. It should not be taxes, taxes, taxes. The more taxes we impose, the more it is heavier for the people. It’s a burden on our people.)

Pacquiao said that the government should maximize the potential of GOCCs. If elected president, Pacquiao said he would ensure that the country will have a favorable business climate to attract domestic and foreign investors.

He also said he would push for even lower corporate income taxes. Just this year, Duterte signed into law the Corporate Recovery and Tax Incentives for Enterprises (CREATE) bill, which lowered corporate income tax from 30% to 25% for large corporations and 20% for small businesses.

In making his case, the boxing champion-turned-politician said that Singapore’s corporate income taxes stood at 17% while other peers in the region are at 20%.

The senator also said that corruption is to be blamed for less-than-ideal tax collections.

(Let’s fix government. We need to correct everything because we would not be able to rise from this if we don’t change the system.) – Rappler.com