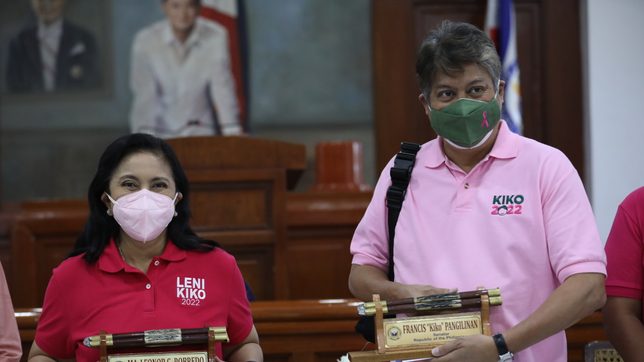 Facebook Twitter Copy URL
Copied
'We owe it to our supporters really to do as best we can and fight until the very end,' says VP aspirant Senator Kiko Pangilinan

Vice presidential aspirant Senator Kiko Pangilinan said there will be no substitutions in his 2022 tandem with Vice President Leni Robredo.

Pangilinan said this at the Kapihan sa Manila Bay on Wednesday, November 10, where he was asked if he would be open to withdrawing his candidacy to make way for another running mate for Robredo.

“In terms of itong mga substitution? Wala, wala na ‘yon. Inumpisahan na natin ‘to, and we can see the massive outpouring of support,” Pangilinan said.

(In terms of all these substitutions? No, that won’t happen.  We already started this, and we can see the massive outpouring of support.)

“We owe it to our supporters really to do as best we can and fight until the very end para maipanalo ang kandidatura ng Ka-TRoPa (to win the candidacy of Ka-TRoPa),” added Pangilinan, who was a reluctant vice presidential candidate.

“Ka-TRoPa” – taken from “tropa” or a group of friends – combines the first syllables of the names of Robredo and Pangilinan.

He was also asked about the withdrawal of Davao City Mayor Sara Duterte from her city’s mayoral race, fueling speculations she would seek a national post.

Pangilinan said they had expected Sara Duterte’s move, noting it was the same political strategy employed by her father President Rodrigo Duterte in the 2016 polls. Then-mayor Rodrigo Duterte had filed his candidacy for reelection in October 2015 but withdrew it over a month later to substitute for standard-bearer of PDP Laban in 2016.

(We expected that. They already did that kind of substitution in 2016. They are just repeating the script, so it’s no longer a surprise.)

(In our case, we will just continue going around the country and consolidating our supporters.)

Electoral aspirants for next year’s elections have until November 15 to file for substitution.

In a separate press conference in Batangas on Wednesday, Robredo said the developments concerning Sara Duterte, who is widely speculated to run in tandem with presidential aspirant Bongbong Marcos, do not affect them. If anything, she said, it can work to their advantage.

(I think it can work to our advantage because it is clearer who, what they are fighting for, what their beliefs are, and who their allies are.)

Robredo earlier hit the practice of substitutions during elections as a “mockery of election laws,” adding that the rules on it must be revisited.

At present, political parties can replace the original candidate they fielded, given that their first candidate dies, withdraws, or is disqualified by the Commission on Elections.

Pink ribbons adorned the streets of Batangas City and supporters were clad in pink shirts, all differently designed as they were independently produced by each group. The tandem was accompanied by Batangas Vice Governor Mark Leviste II.

In a forum at the Sampaguita farm in Batangas City, Robredo said the kind of support they witnessed during their Batangas visit exceeded their expectations, noting that she and Pangilinan had decided on their respective bids at the last minute.

(We knew even before I decided that many friends, former allies have already made commitments. And we understand that…. We thought that we would no longer see the kind of support we previously got in here in Batangas. But now, we can feel that people have become even more decided now.)

Among those who joined the press conference were student writers and representatives of youth groups whom Robredo asked for help.

After the press conference, the tandem’s group proceeded to the provincial capitol for a People’s Council Meeting.  Despite the prominent display of pink ribbons at the capitol gates, Batangas Governor Hermilando Mandanas said this did not signify an endorsement for Robredo.

“The Vice President borrowed our provincial auditorium for consultation and she will visit the provinvial vaccination center in the DREAM Zone…. Incidentally I am still working from home. Not in the Capitolyo today,” Mandanas said, adding that he has not pledged support to any presidential and vice presidential aspirants.

Among those who showed support for Robredo was labor leader Ruel Gutierrez Punzalan, the national president of Philippine Metal Workers Alliance which has about 15,000 members nationwide. He announced that their council has decided to support Robredo’s presidential bid.

(We have seen her competent leadership and she has proven, as Vice President, that she is clean, no taint of corruption…she doesn’t lie, and everything that she’s been saying is correct. She’s the one that Filipinos are looking for.)

He said they have encouraged their members to donate one day’s salary to help Robredo’s campaign.

(On our part, from the botto, volunteers, basic sectors like ours in labor, we will initiate support for her for Philippine progress.) – Tina Ganzon-Ozaeta and Jacq Martinez/Rappler.com

Jacq Martinez is a Rappler intern. This article was reviewed by a Rappler reporter and editor. Learn more about Rappler’s internship program here.