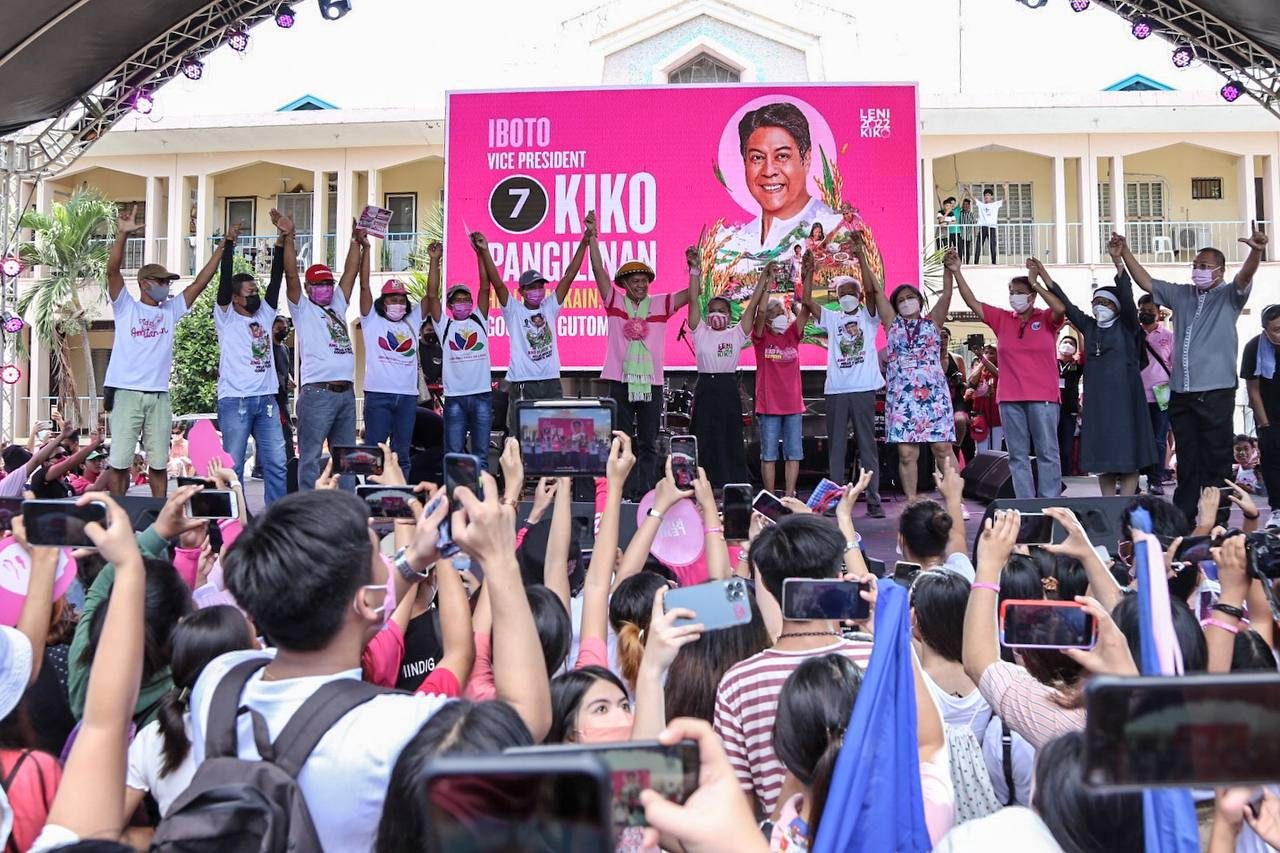 IN MARCOS COUNTRY. Farmers and other representatives of sectoral groups raise the hands of senator and vice presidential candidate Francis 'Kiko' Pangilinan as a show of support to his candidacy.

LAOAG, Philippines – In the campaign homestretch for the May 9 elections, senator and vice presidential candidate Francis “Kiko” Pangilinan risked and entered into another “Solid North” territory on Thursday, May 5, as he rallied for more government support for local farmers and fisherfolk.

Pangilinan, running mate of presidential candidate and Vice President Leni Robredo, said in a rally in Vigan, Ilocos Sur, that Filipino farmers and fishermen had long suffered under a broken system that failed to prioritize their plight.

This is the second time that Pangilinan visited the Ilocos region this campaign season. Last April 12, he and Robredo visited San Fernando City in La Union province.

The vice presidential candidate pitched to Ilocano voters his pro-agriculture and food-security platform, emphasizing how these two are vital in taking steps toward economic progress.

(There is no progressive nation in the world that has not given importance to food security.)

Pangilinan related to the crowd, composed mostly of young Ilocanos, the stories of the farmers from San Nicolas village in Pampanga who endorsed and raised his hands during their rally there.

He said that their stories, more than deserving to be told, should be a call to action about the decades of neglect of the country’s fishing and farming sectors.

Even if he loses the vice presidency, Pangilinan vowed that he would continue pushing for agricultural reforms, specially with the continued threats of climate change that resulted in unharvested crops to be just put to waste.

He pledged that farmers in Ilocos and across the country would be assisted comprehensively in terms of provision of fertilizer and farming equipment, and ensure that they would not fall into debt through equitable financial loans and insurances.

(If that’s not fulfilled, our farmers will continue to be poor and mired in debt.)

(What kind of society would just leave farmers and fisherfolk poor? It’s injustice. We need to stop degrading and abusing sectors at the fringes of society.)

In the Ilocos region, the farmers and fishermen contribute to at least 17.6% of the regional economy, according to the latest data from the Philippine Statistics Authority.

Into the Lion’s den

The rally in Vigan was held at the Immaculate Conception Minor Seminary Grounds.

He said that many had warned him that it would be futile to visit the Marcos bailiwick because Ilocanos are known for bloc voting behavior under the so-called Solid North.

But he emphasized that “every vote in this campaign is precious. Kaya tayo nandito at hindi tayo papayag na hindi pumunta dito (That’s why we’re here, and we won’t accept not going here).”

While in Ilocos Sur, he also thanked residents for consistently delivering votes for him during his past senatorial bids.

(It doesn’t mean that if we differ in political beliefs, we won’t be able to engage with others. That is what radical love means. That is democracy. We need to respect each other.) – Rappler.com