ASPIRING PRESIDENT. Retired Lieutenant General Antonio Parlade files his certificate of candidacy for president in the May 2022 elections at the Comelec headquarters in Manila on November 15, 2021.

The mouthpiece of government’s fierce anti-communist campaign described presidential aide-turned-senator Bong Go as one of the country’s problems who was “controlling” the decisions of President Rodrigo Duterte. 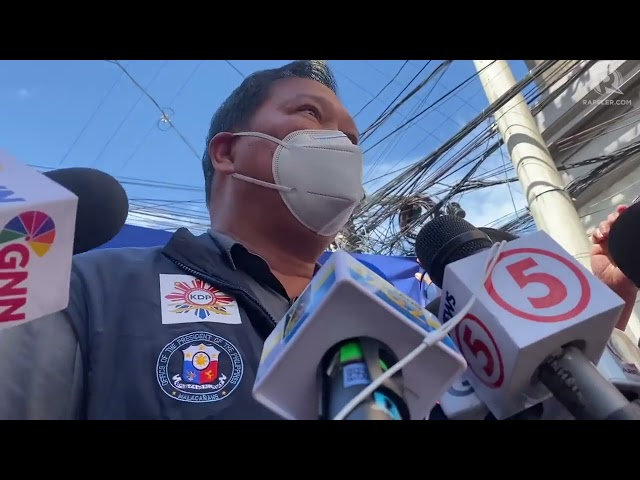 Retired Lieutenant General Antonio Parlade Jr, recently resigned deputy director general of the National Security Council, filed on Monday, November 15, his candidacy for president, a post that Go, – at least as of 3:30 pm Monday – is also aspiring for.

Parlade added, “I don’t want to elaborate on that but that’s very clear. You ask your people, you ask your constituents, you ask people in the government, you ask the AFP (Armed Forces of the Philippines) why.”

Part of the problem is that Go was the one controlling the decisions made by Duterte, he said. “Wala akong beef with Senator Bong Go. I just don’t like the way he does things including controlling the decisions of the President,” This is common knowledge among officers and soldiers in the military and the Philippine Army, and even Defense Secretary Delfin Lorenzana, according to Parlade.

“You ask the AFP, you ask the Philippine Army, you ask the Secretary of [the] National Defense,” the longtime spokesperson of the National Task Force to End Local Communist Armed Conflict (NTF-ELCAC) said. Parlade, former commander of the military’s Southern Luzon Command (Solcom), is seeking the presidency for the 2022 elections – a move that surprised many, as some sectors thought he was gunning for a senatorial post. He substituted Antonio Valdez of the Katipunan ng Demokratikong Pilipino, who earlier filed for president as an independent candidate.

Only a few hours after Parlade’s remarks, both the AFP and the Army issued separate statements.

“The AFP is and will remain non-partisan. Our mandate is clear. Our task is to ensure the peace and security of the elections and allow the will of the Filipino people to manifest and prevail,” AFP spokesperson Colonel Ramon Zagala said.

“We refrain from indulging our personnel to participate in any political activity and actions of our political aspirants and candidates in order for us to assist in the conduct of a just, safe, peaceful, and orderly election,” Army spokesperson Colonel Xerxes Trinidad said.

Go stressed nobody can control Duterte. But he said he did not want to engage in a word war with Parlade as he respects the general, adding it was he who recommended him to be deputy director general of the National Security Council, which carried the rank of undersecretary.

Lorenzana also described Parlade’s claim as “baseless.” In a statement, he said: “In the years I have known the President, he has always been his own man. The President stands by his own decisions, has always been firm in his directives to us, who are working for him, and is not as easily swayed or influenced by others as purported by the general.”

The defense chief also downplayed rumors of “brewing trouble or discontent” in the military.

Parlade is one of the most dominant voices in Duterte’s anti-insurgency efforts, constantly red-tagging activists, journalists, lawyers, and students. Despite these efforts, Parlade never got to the top post in the army or armed forces.

In 2019, Parlade was among the contenders to become the Army commanding general after serving as the AFP deputy chief-of-staff for Civil-Military Operations. However, then-Solcom chief General Gilbert Gapay was tapped by Duterte to head the 100,000 strong Army in 2019, and eventually the AFP.

Parlade’s last stint in the military is as commanding general of Solcom. Before he retired in July, Parlade resigned from the NTF-ELCAC. However, only a few months after his resignation and retirement, he was appointed by Duterte as deputy director general of the National Security Council.

Meanwhile, President Duterte also addressed the issue in his talk to the people address late night Monday, saying Go “does not control me.”

“He does not control anybody. He does not control me. He is here to do his duty, na may matanungan tayo agad (so we can readily ask someone),” Duterte said of Go, referring to his longtime aide’s position as chairman of the Senate’s health committee.    – Rappler.com