The social media director of President Rodrigo Duterte’s 2016 campaign and mayoral hopeful Jose Gabriel “Pompee” La Viña missed the deadline for the filing of certificates of candidacy on Friday, October 8.

La Viña was a no-show in the Comelec office until it closed its doors.

There was no explanation for his failure to submit his papers, but members of his ticket said La Viña would likely invoke the substitution rule of the Comelec on or before the November 15 deadline.

His ally, lawyer Gil Banaag, filed his certificate of candidacy for mayor under the Partido Pederal Maharlika Party, a group that has never been heard of in Cagayan de Oro until Friday afternoon.

La Viña was supposed to launch another attempt to snatch the city’s mayoral post from the group that has dominated Cagayan de Oro’s politics for nearly nine years. La Viña, administrator of the Phividec Industrial Authority, was expected to file his COC a day after members of his ticket – including Cagayan de Oro 2nd District Representative Rufus Rodriguez who is seeking reelection, and Councilor Lordan Suan, their candidate for congressman in the city’s 1st District – submitted theirs to the local Comelec office on Burgos Street, just a few blocks from city hall.

Uy filed his COC last Friday, October 1, without an announcement and much fanfare. He and his vice mayor-son Reineir Joaquin, who is seeking the congressional post his father would vacate next year, merely sent a representative to hand carry their documents to the local Comelec office.

It would have been the second time for La Viña to seek Cagayan de Oro’s mayoral seat. In 2019, he challenged the reelection bid of Mayor Moreno but lost despite the support of erstwhile local political kingpin Vicente Emano, his running mate, and Rodriguez, the leader of the Centrist Democratic Party.

If he invokes the substitution rule, the 2022 battle for the city’s leadership promises to become a proxy war between Moreno and Misamis Oriental Governor Yevgeny Vincente Emano, erstwhile allies turned bitter political enemies. 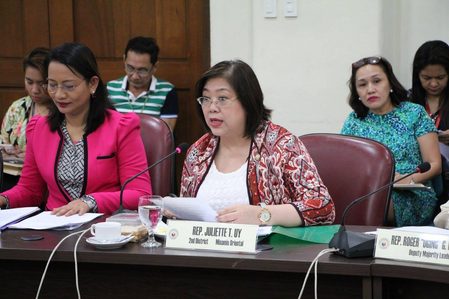 The two supported each other politically and were even basketball buddies until Moreno challenged the reelection bid of Emano’s father Vicente and unseated him in the mayoral elections in 2013.

The two are not likely to clash head-on but both are running for different positions in the same province, Misamis Oriental. But at the same time, Moreno and Emano, both serving their third and last office terms, are working to make their allies win as many seats as possible in Cagayan de Oro.

Moreno’s daughter Imee and Emano’s niece Yvy are seeking seats in the city council for the first time, and they filed their COCs under the two warring political groups on Thursday, October 7.

The 46-year-old Emano filed his COC on Tuesday, October 5, while Moreno filed his, for Misamis Oriental governor, on Thursday.

La Viña, whose late mother Lourdes was a former Cagayan de Oro councilor, was a commissioner of the Social Security System who was sacked in 2018 following a public fund-abuse controversy.

La Viña was later appointed as an undersecretary of the Department of Tourism where he served until 2019, the year he first ran and failed to win the city’s mayoral post.

A year later, he was appointed as administrator of Phividec which controls a state-owned 3,000-hectare industrial estate in Misamis Oriental.

The La Viña group’s main opponent, Representative Uy, is running for mayor, 11 years after the congressman’s first attempt to win the city’s top post. Uy lost in the 2010 mayoral race against Emano’s late father who beat him by a relatively slim margin. Uy bounced back by winning the congressional race three years later.

Before becoming a congressman, the 67-year-old Uy served as the chairman of Barangay Carmen when he first ran for mayor against the late local political kingpin.

Uy’s wife Lorna is now the chairperson of Carmen, an urban village with the biggest voting population in Cagayan de Oro,

La Viña, meanwhile, has found an ally in Rodriguez, another erstwhile ally of Moreno who helped unseat the elder Emano in 2013.

Rodriguez and Moreno became political enemies in 2016 when the congressman challenged the mayor’s reelection bid that year. Rodriguez and the elder Emano, another Moreno challenger, lost in the 2016 elections.

Rodriguez, who is serving his first term as a congressman since 2019 and his fourth since 2007, filed his COC for reelection under La Viña’s ticket but on paper, he is a candidate of the federalism advocate CDP.

Like Uy, the 68-year-old Rodriguez is the head of a family that has established a political bailiwick in the western villages of Cagayan de Oro.

His brother Maximo Jr. is a former representative of Abante Mindanao; his younger sister Jocelyn is a city councilor now running for vice mayor; and his nephew Maximo III is the barangay chairman of Nazareth, another vote-rich urban village in Cagayan de Oro.

Rodriguez, who served as vice governor of Misamis Oriental during the last years of the Marcos administration, is a former dean of the College of Law of San Sebastian College. He also served as immigration commissioner during the Estrada administration. –Rappler.com