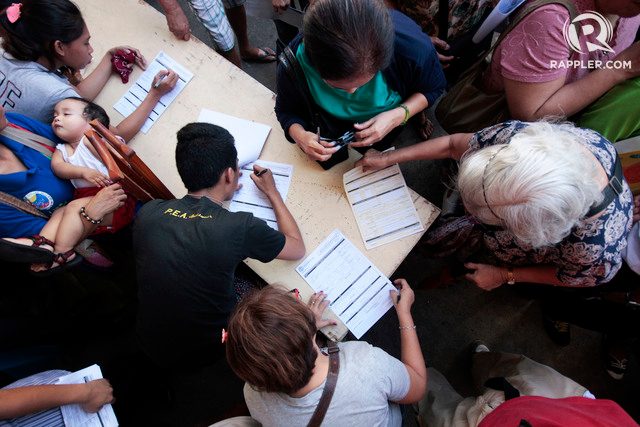 An election watchdog said on April 12, 2021 that the pandemic made people realize why it is important to elect the right leaders.

Facebook Twitter Copy URL
Copied
The election watchdog also hopes that lockdown restrictions will be eased further by May, so that voter registration and voter education activities will be back in full swing

The COVID-19 crisis in the Philippines was a wake-up call for Filipinos to elect people who are capable to lead, an election watchdog said Monday, April 12.

“If we just look at certain groups [on] the internet…this pandemic has made a lot of people realize why it is important that they put into position the right leaders,” said Angela Antonio, director for communications at the Parish Pastoral Council for Responsible Voting (PPCRV), in an interview with Rappler.

She believed that people, particularly those who have voted before, are keeping a close eye on elected officials who may or may not be doing their job.

(Either people go, ‘These people I elected in my local government are doing their work, thank you,’ or ‘I voted for these people but they’re not doing their job. Now I know what to do next time.’)

The PPCRV has a number of voter education initiatives lined up until 2022, and Antonio said they are just waiting for lockdown restrictions to ease further in Metro Manila.

The National Capital Region and four nearby provinces, collectively known as “NCR Plus,” are under the modified enhanced community quarantine (MECQ), the second strictest form of lockdown, resulting in the suspension of voter registration activities in the region.

“Voter education spans a whole range, from the technical, especially if you are a first-time voter, like how to vote…[to] campaigns that are going to make elections meaningful, like teaching our voters who deserves our vote, why [their] vote [is] important,” Antonio said in a mix of English and Filipino.

She also hinted at voter registration campaigns that the PPCRV will launch once Commission on Elections (Comelec) operations in “NCR Plus” are back in full swing.

“We were supposed to come out with our own interesting campaigns to really get new voters in particular to stand up and really go to their Comelec offices and register,” she said.

Comelec Commissioner Aimee Ferolino-Ampoloquio said in March that more than 2.4 million of its target 4 million first-time voters have already registered for the 2022 elections, but only 300,000 out of the 3 million Filipinos who failed to vote in the past two elections have re-activated their data. Antonio said the PPCRV is already preparing for a more expensive election season, as the pandemic requires them to supply their volunteers with personal protective equipment.

“If in the past, we are just accounting for t-shirts, IDs, and lanyards to our PPCRV volunteers, now, in our tally, there is already a column for face masks, face shields, and personal alcohol bottles,” she said.

As the Comelec mulls over the possibility of banning or limiting to face-to-face campaigning, the PPCRV said they will leave it up to the poll body to decide on the matter, but promised to propose solutions along the way.

“Things are going to be different, there are going to be sacrifices. People in totality and the PPCRV will lead this, looking at ways and means as much as possible to help, to cooperate, and to see how things can be better,” Antonio said. – Rappler.com