ENCODING VOLUNTEERS. A batch of PPCRV volunteers pose for the camera before they assist in encoding election returns at the command center at the UST Quadricentennial Pavilion.

MANILA, Philippines – In the aftermath of the high-stakes 2022 polls, hundreds of volunteers gathered at the Parish Pastoral Council for Responsible Voting’s (PPCRV) command center at the University of Santo Tomas (UST) Quadricentennial Pavilion to help monitor election results.

The UST Pavilion is overflowing with volunteers – you’ll see flocks of people coming in or helping distribute food from a supply of donations that never seem to run out. Every volunteer is happy to be here, and there’s a palpable sense of camaraderie and friendship.

At the command center, volunteers are tasked to encode physical copies of election returns (ERs) printed by vote-counting machines from different precincts. Volunteers work in one-and-a-half hour shifts and the command center’s operations are 24/7. 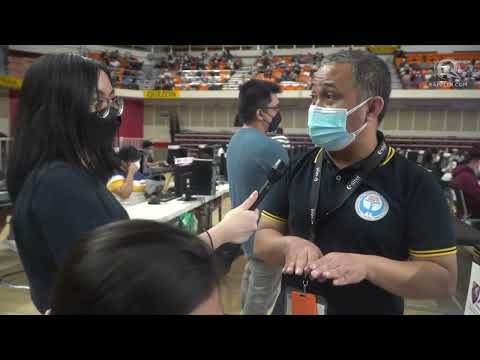 All PPCRV looks for in a volunteer is that you are nonpartisan – meaning not linked to any political candidate or party – and that you are fully vaccinated.

“If you can type, if you can use a computer, if you can read, you can help here and participate in this process that we have,” PPCRV spokesperson Vann dela Cruz said.

Dela Cruz also said they were only estimating about 200 volunteers per day, but on Tuesday, May 10, the command center had accommodated around 1,000 volunteers.

The command center also saw both first-time and longtime volunteers. Georgiana Uy and Cheyenne Kohchet-Chua, both 20-years-old and first-time voters, spontaneously planned to volunteer at the command center with the rest of their friends. They both shared that they volunteered to encode ERs because they wanted to go beyond casting their votes.

“I have this feeling that I have to do more than just casting my vote. Although I’m not pressuring anyone else naman to volunteer, I just feel like may puwede pa pala akong gawin (I can do more),” Uy said.

“I felt like voting was just not enough for me to do…. I wanted to do something more, to actually be a part of the movement, to say that I really did my best in fighting for a lot of Filipinos,” Kohchet-Chua shared.

Alex Lipnica, 55, had volunteered for PPCRV for every election since the group’s establishment.

(Of course, I’ve wanted clean and honest elections ever since the time of Cory Aquino and Ferdinand Marcos. I think that it’s a citizen’s duty to get involved.) The surge in volunteers also came after Filipinos worried about possible irregularities in this year’s election. Uy said she wanted to channel her election anxiety into work and action.

(There are lots of reports about the supposed anomalies, so I thought, why not see it for myself? At least, if I’m here, I’ll feel better somehow that something right can be done in the process.)

Officials at the PPCRV command center were grateful for all the support they received from volunteers and donors alike during the past few days.

(It’s great and heartwarming to see the continuous supply of food as well as the steady influx of volunteers.)

“I know it’s kind of scary for people to be a first-time volunteer, because I was quite scared at first. But it really helps if you know you’re doing the right thing, if you know you have people who are backing you up, and the end goal is really not for you, but for others,” Kohchet-Chua said. – Rappler.com