Presidential bets vow to negotiate with countries to protect OFWs 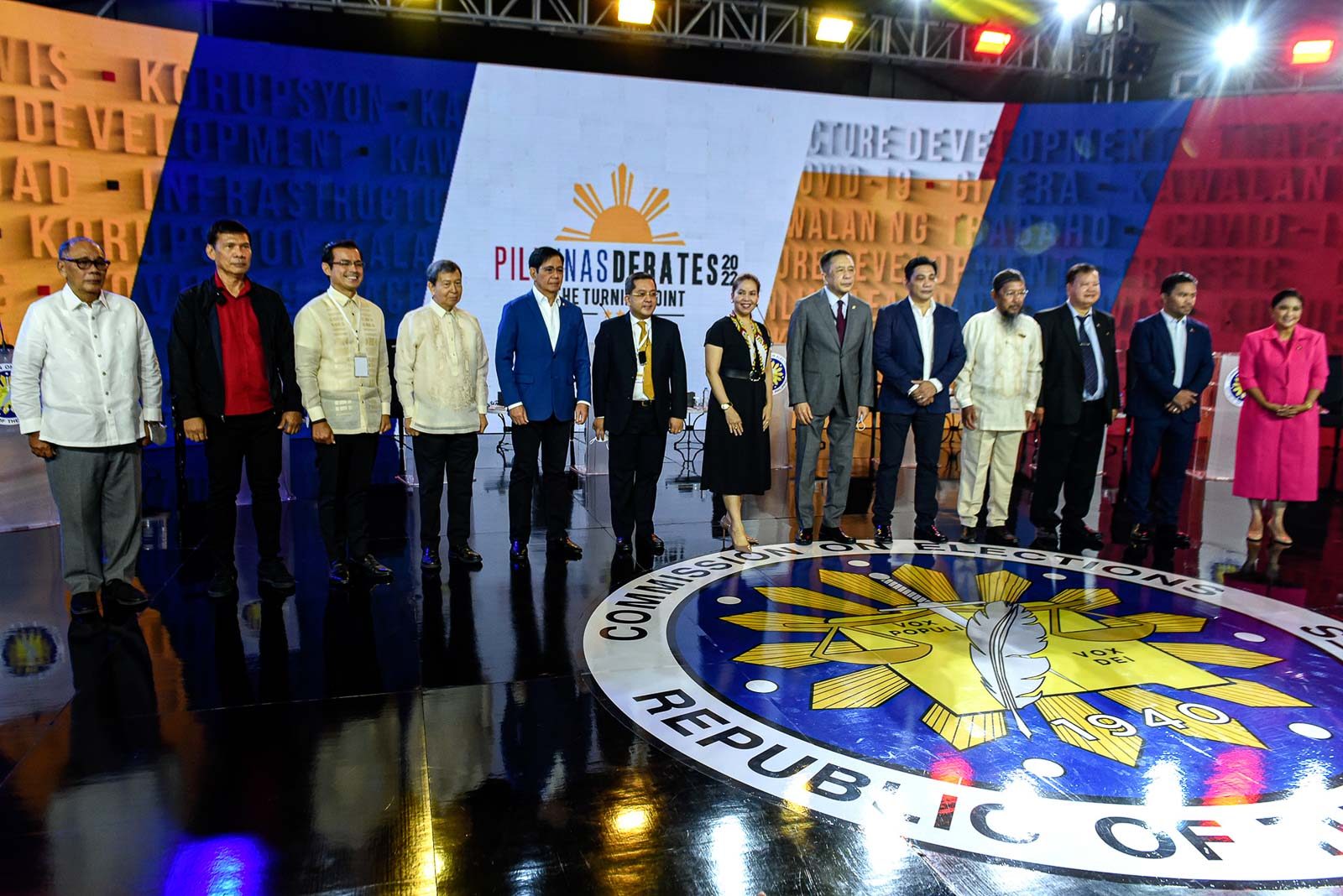 2ND DEBATE. Presidential candidates pose for a photo op before the start of the 2nd Comelec presidential debate at the Sofitel hotel in Pasay City on April 3, 2022.

Facebook Twitter Copy URL
Copied
Candidates also discuss the need to ensure the reintegration of OFWs once they come home, such as 'portability' of benefits for retirees, and business opportunities for OFWs who want to keep working

MANILA, Philippines – In the second debate organized by the Commission on Elections (Comelec) on Sunday, April 3, presidential candidates zeroed in on the importance of building bilateral agreements to ensure the protection and welfare of overseas Filipino workers (OFWs).

They highlighted the significance of providing support for OFWs during their time working abroad, as well as, when they plan to retire.

Manila Mayor Isko Moreno said the Philippines must focus on forging a bilateral agreement with Saudi Arabia, a top destination for OFWs, that would ensure the protection of documented and undocumented workers.

The Philippines and Saudi Arabia signed a domestic worker recruitment agreement in 2013, but abuses have since persisted.

Vice President Leni Robredo said, despite the fact that the Philippines has entered into several conventions on the protection of migrant workers, a significant number of OFWs who are undocumented and may not be covered by the same protections offered to documented workers.

(We need better programs to incentivize undocumented workers to appear at embassies and consulates to report to be accounted for, so that if they run into problems, we can help them.)

Meanwhile, doctor-lawyer Jose Montemayor said that workers must be able to easily report their troubles whether they are documented or not. He pointed to existing agreements we have with other Southeast Asian countries like Indonesia.

(Undocumented workers must be reported immediately. No matter where they are, especially when there is disaster or crisis, their employers give them a difficult … these should be reported to our embassies.)

Robredo agreed with Montemayor on the need to strengthen the capacities of Philippine embassies and consulates to assist OFWs. She also took the opportunity to mention her proposal to install a migrant workers office in every province so that OFWs’ families left in the Philippines would be able to seek support as well. (READ: Replicating Naga accomplishment: Robredo eyes one-stop migration centers for OFWs)

Robredo brought up the need to forge “portability” of social benefits for OFWs who are looking to retire, but find themselves not wanting to do so in the Philippines because of the lack of benefits their employment abroad offers. She said bilateral talks would help make this possible.

“Social welfare and health benefits [should be there] so that even if [OFWs] come home, they would still be entitled to it, as discussed by the two governments,” said Robredo in a mix of Filipino and English.

“But in the long run, our most important target should be to ensure that our countrymen only migrate out of choice and not out of necessity,” Robredo added.

Moreno added the need for the government to help with OFWs’ reintegration once they come home by providing them opportunities to do business or farming. This can be facilitated by the trade and agriculture departments, he said.

Meanwhile, Senator Panfilo Lacson was the only candidate to bring up the newly approved Department of Migrant Workers, set to begin operations by 2023. President Rodrigo Duterte signed the law creating the department in December 2021.

The new department turns the Philippine Overseas Employment Administration into the Department of Migrant Workers, where all relevant offices in other agencies would be merged and transferred.

With a single department for OFW concerns, the government hopes to make it easier for migrant workers to get their documents and seek help from the government. – Rappler.com

election debates in the Philippines