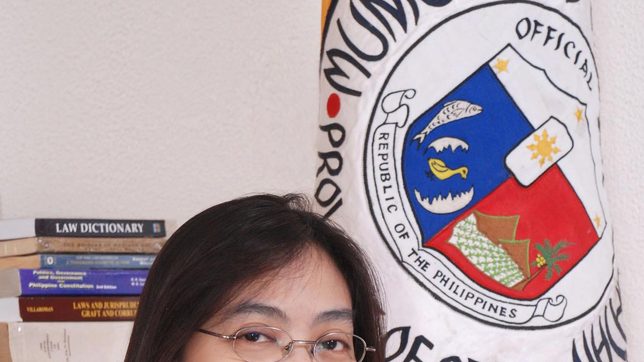 Former Pinamungajan mayor Geraldine “Gay” Yapha will not be running for governor of Cebu under the PROMDI party after all.

Yapha explained why she did not file her candidacy for governor of Cebu after presidential aspirant Manny Pacquiao announced that she would in a press conference last Sunday, November 14.

“We have collectively come to a decision to set aside my political plans in order to focus and prioritize the journey of bringing one of our own, a true Cebuano, from Barangay Guimbawian, Pinamungajan to become the leader of our country,” Yapha said in a statement, highlighting that Pacquiao traces his roots to her town.

She added: “It is because of this, I have chosen not to seek a post at the Cebu provincial Capitol, and instead focus all my energy on his campaign.”

Pacquiao previously announced on Sunday, October 14, that she was going to challenge incumbent Governor Gwendolyn Garcia and former congressman Ace Durano through substitution.

PROMDI’s Martin Mari Lozada filed his candidacy for governor in October, but withdrew before the November 15 substitution deadline.

Rappler sought PROMDI’s statement on Yapha’s decision but has not received a response from its president Mimo Osmeña as of writing.

Osmeña previously said that he believed Pacquiao’s candidacy under PROMDI would give the long-dormant party the boost it needed for a revival, a dream of his late father and party founder Lito Osmeña.

However, its inability to field a gubernatorial bet coupled with the low-number of party members makes that possibility less likely now. Emmanuel Gumba, who was then running for provincial board member of the 3rd District of Cebu, switched places with his wife Gayle Birao, who filed her COC to vie for a city council seat in Toledo City, Cebu.

Castillano also told Rappler that PROMDI’s Antonio Pono, who previously ran for the congressional seat of Cebu’s 3rd district, has also withdrawn from the race. This move means Cebu 3rd District Representative Pablo John Garcia is running unopposed in the May 2022 elections.

Other PROMDI bets are :