SUCCESSFUL BID. Broadcaster Raffy Tulfo files his certificate of candidacy as independent for senator for the 2022 national elections in October 2021. Rappler

MANILA, Philippines – Broadcaster and soon-to-be senator Raffy Tulfo is confident that despite there being only one opposition senator in the upper legislative chamber, it will still be able to fulfill its job as a check on the awesome powers of the presidency.

“Rubber stamp? No, I don’t think so kasi ang mga senador, may kanya-kanyang pag-iisip ‘yan and I respect all of them dahil independent naman ‘yung kanilang thinking,” he told Rappler senior reporter Pia Ranada on Thursday, May 12, in an episode of Rappler Talk Newsmaker.

(Rubber stamp? No, I don’t think so because senators have their own minds and I respect all of them because they are independent in their thinking.) 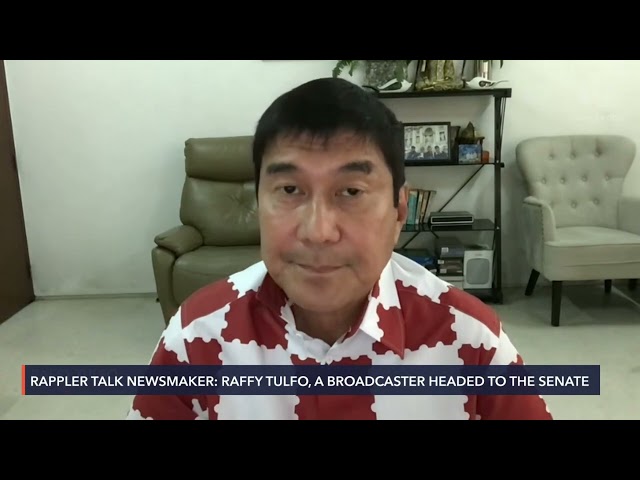 “I believe all senators will likely not sell their principles…. They’ll do what’s in the best interest for the country,” added Tulfo.

In the incoming 19th Congress, Senator Risa Hontiveros will be the only opposition lawmaker left in the upper chamber, after Senator Kiko Pangilinan ran for vice president, reelectionist and detained Senator Leila de Lima appeared headed for loss in the 2022 polls, and outgoing Senator Franklin Drilon retires from politics.

Asked where he lies in the Senate’s political spectrum, Tulfo said he considered himself “independent” though he would join the majority.

“I’m independent, however, I want to join the majority so I am better able to push for policies,” said Tulfo in Filipino.

Tulfo ran for senator as an independent but he was a guest candidate of two slates – that of Senator Panfilo Lacson and Senate President Vicente Sotto III, for a time, and that of Senator Manny Pacquiao and Congressman Lito Atienza.

The broadcaster, who would like to head the Senate labor committee, said he would show his “independence” despite wishing to be identified with the majority.

(It doesn’t mean because I’m in the majority that I will just follow everything they say, that my neck is tied to them. If I see bad policies that will affect the sectors I want to help, then I will abstain.)

Tulfo said he would just “keep quiet” but approach his fellow senators privately to lodge his opposition to the policy they are proposing.

But he quickly gave assurances that the Marcos administration can expect he will “not waste time and effort criticizing the government left and right.”

If he disagrees with presumptive president Marcos’ policies or remarks, he might just seek a private appointment with the Chief Executive, instead of criticizing him in public.

“I’ll tell the President directly but I won’t attack him on-air because we are both candidates elected by the people,” said Tulfo.

In the same interview, Tulfo defended how the presumptive president is treating fellow media workers and described the state of press freedom in the country as “okay.” His remarks echo those of the Marcos camp and the outgoing Duterte administration which has banned reporters from presidential events, shut down a major broadcasting network amid a pandemic, and red-tagged journalists. – Rappler.com

Read other stories from Rappler Talk Newsmaker with Raffy Tulfo: