Facebook Twitter Copy URL
Copied
(1st UPDATE) Robredo, who previously swept Cebu by a landslide against Marcos in the 2016 vice presidential race, lost in every city and town in Cebu

CEBU CITY, Philippines – As the counting of certificates of canvass (COCs) wrapped up on Wednesday, May 25, it became clear that Cebu, a province once touted as “anti-Marcos country,” delivered the highest number of votes for the tandem of president-elect Ferdinand “Bongbong” Marcos Jr. and vice president-elect Sara Duterte.

Sara Duterte got even more votes than Marcos – 1,772,999 votes. Her father, President Rodrigo Duterte, bagged over 1.1 million votes in Cebu in the 2016 presidential race.

Vice President Leni Robredo was a distant second to Marcos with 577,105 votes. This is a drastic turnaround from the 2016 vice presidential race, where Robredo beat Marcos by a landslide in Cebu with over 800,000 votes to his over 300,000 votes.

While many analysts attributed Marcos’ poor Cebu performance in 2016 to the province’s history of anti-Marcos activism, the 2022 election results showed that this rich history probably had little impact or had been considerably diminished. (READ: [ANALYSIS] Why Cebu is historically renowned as anti-Marcos country)

There were a few factors that made it difficult for Robredo to repeat her 2016 victory in Cebu.

In her 2016 run, Robredo was supported by the then-ruling Liberal Party, which had a wide network and machinery to boost her campaign in the province and throughout the country. At the time, 90% of the province’s incumbent local chief executives were LP members.

Following Duterte’s victory in 2016, most of Robredo’s allies bolted the LP to join the new president’s party which became the ruling party, PDP-Laban.

While these endorsements helped her campaign, she did not get enough support from local chief executives.

Davide won his bid for reelection, while Margot Osmeña, the wife of former mayor Tommy Osmeña, lost her bid for Cebu City mayor.

Robredo was also banking on her extensive volunteer network in the province to deliver.

Although the grassroots efforts were not enough to win Cebu, the house-to-house campaigns did boost her campaign, as shown by her second-place finish ahead of Senator Manny Pacquiao, a Bisaya-speaking boxing superstar who ran under the banner of Cebuano-party PROMDI, a local party with existing machinery.

Pacquiao ranked third in Cebu with 434,140 votes. While PROMDI, founded by the late Lito Osmeña, is not as powerful as the Garcia family’s One Cebu, they do have members and allies across the province.

Editor’s Note: An earlier version of this story reported that Robredo won in Tuburan town. This has been corrected.

But Pacquiao actually won in that town with 15,773 votes.

Tuburan was one of 15 towns where Angat Buhay launched in Cebu in 2017.  The program provided solar-powered irrigation to the town’s coffee farms then.

In the northern town of San Remigio, where Mayor Mar Martinez came out to openly support Robredo, she still lost to Marcos, who got 14,746 votes against the Vice President’s 9,475 votes.

In fact, it was in Cebu that the Marcos-Duterte Uniteam alliance was first discussed in October 2021.

Cebu City Mayor Mike Rama, who initially supported the candidacy of Special Assistant to the President Bong Go, shifted his support to Marcos-Duterte in January 2022.

The key alliance was with One Cebu, the province’s most influential party, with a network that extends throughout the island.

It took the Garcia dynasty months to come to a decision on who to endorse. The main roadblock was the refusal of co-founder and former party secretary general Pablo John “PJ” Garcia, Cebu’s 3rd District representative, to endorse Marcos. What appeared to be the key in sealing the Uniteam alliance was Liloan Mayor Christina Garcia-Frasco, whom Sara Duterte tapped to be her spokesperson in July 2021. She was the first member of the Garcia family to endorse the Uniteam tandem.

In October 2021, Frasco met with mayors as Cebu’s League of Municipalities Philippines president, where she released a letter of support for the Marcos and Duterte.

However, it would not be until April 12, 2022, that the One Cebu party would officially form an alliance the tandem.

According to Garcia, the head of One Cebu, the party’s internal surveys showing Marcos-Duterte ranking the highest among voters in Cebu was what made them decide to make the alliance official. In Cebu, “unity” became more than just a campaign slogan when the Marcos-Duterte tandem even united the independent Cebu City with the province, gaining the support of Mayor Mike Rama and his local party Partido Barug.

During the April 18 rally in Cebu City, which drew a crowd of almost 300,000 people, Garcia and Rama appeared together, and said they would be pushing a policy of One Cebu Island.

Rama would later say in a Rappler Talk interview that the importance of a united island became more highlighted during the pandemic, when the independent cities on the island of Cebu, Lapu-Lapu, and Mandaue pursued different COVID-19 response strategies. 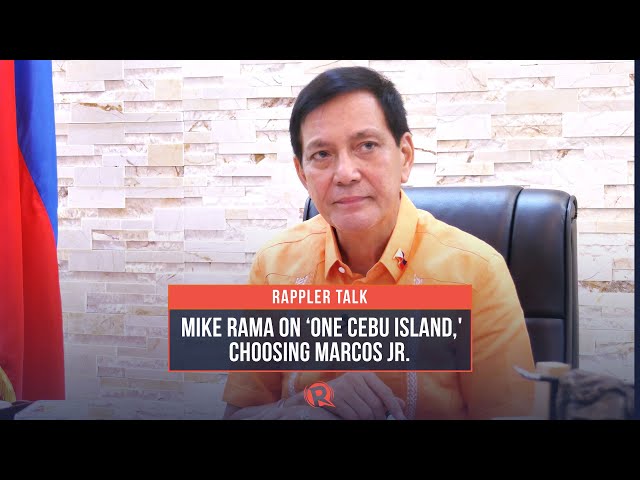 It would often be the case that Cebu City would assert its independence when it disagreed with provincial policies and vice versa. But with Rama and Garcia, who are allies, Cebuanos can expect more uniformed policies in the next term.

Mayor Duterte proved to be an important force in sweeping the province, as she got even more votes than her standard bearer in Cebu. Sara Duterte won in every single city and municipality in the province.

Vice presidential candidate and Senate President Vicente Sotto III, whose roots are in Cebu, came second in the province with 357,488 votes, while Robredo’s running mate Senator Kiko Pangilinan was third with 331,488 votes.

While Garcia’s father and former governor Pablo Garcia once lawyered for the opposition in the 1986 snap election, the incumbent governor said that her family was never affected by Martial Law.

“My family never suffered under Martial Law, but we certainly suffered miserably under PNoy (Aquino) and all of those cases that they filed against me. Ang lahat na mga paratang na ipinalabas na mga Garcias ay mga kawatan eh kung anu-ano pa (All of those accusations they made against the Garcias, that they are allegedly thieves and all)),“ she told reporters on May 10.

The late former president Benigno Aquino III ordered Garcia dismissed in December 2012 over pending corruption cases. The governor refused to vacate the provincial capitol and instead barricaded herself in her office.

She earlier pegged a margin of victory for Marcos at no less than 1 million votes in Cebu. Garcia’s prediction was close, as Marcos beat Robredo by 938,707 votes.

According to Garcia, the high turnout of voters for Marcos in Cebu was not only due to his “unity” message, but his promise to continue the programs and policies of the Duterte administration.

She was quoted in SunStar Cebu as saying: “Unity is what is needed right now. We had enough of too much polarization, fighting and bickering. What does it achieve? Nothing. Siguro it achieves our choice of colors kasi ‘yung iba bibili ng yellow shirt ‘yung iba pink, ‘yung iba kung anu-ano (others will buy yellow, pink, and other shirts). And then what? Does it help? Does it put food on the table? Does it help educate our children? Does it even just give hope to people who are actually just living on a hand-to-mouth existence?“ – Rappler.com