‘Anti-Marcos country’ no more: Bongbong to beat Robredo in Cebu by landslide Facebook Twitter Copy URL
Copied
Ferdinand Marcos Jr. is set to defeat Vice President Leni Robredo in Cebu, a province she once beat him in by a landslide

CEBU CITY, Philippines – Presumptive president Ferdinand “Bongbong” Marcos Jr. pulled off an unprecedented victory in a province that was once known as “opposition country.”

This is more votes than President Rodrigo Duterte got in the vote-rich province in 2016, when 1.1 million voters chose him as president then.

Aside from his formidable online and offline political machinery, Marcos was able to pull off the victory with the support of the powerful One Cebu party, led by Governor Gwen Garcia, with whom he sealed an alliance in April.

Incumbents bat ‘One Cebu Island’ for Marcos Jr, Duterte in 2022 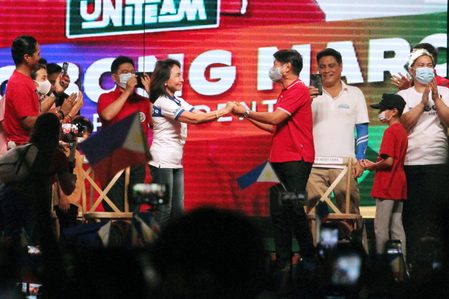 Robredo, on the other hand, had the support of the Osmeña family, Vice Governor Hilario “Junjun” Davide III, and other small town mayors.

The province was known as opposition territory for its crucial role in the opposition movement against late dictator Ferdinand Marcos, the father of Bongbong. (READ: [ANALYSIS] Why Cebu is historically renowned as anti-Marcos country)

His running mate Sara Duterte is also expected to win by a landslide with 69% of Cebu’s vote with 1.7 million votes. Coming in second place in Cebu is Vicente “Tito” Sotto III, who traces his roots here, with 343,966 votes.

Cebu, including its independent capital Mandaue City and Lapu-Lapu City, is the most vote-rich province in the Philippines with over 3.2 million voters. – Rappler.com