ILOILO IS PINK. Ferdinand Marcos Jr.'s allis did their best for him but Ilonggos would not budge from rival presidential bet Vice President Leni Robredo's side.

Facebook Twitter Copy URL
Copied
Leni Robredo tops the presidential race in Iloilo with 728,781 or 54.81% of votes based on partial, unofficial results. She also won in the province in the 2016 vice-presidential race.

In the end, Iloilo still held out for its favored candidate: Vice President Leni Robredo.

Robredo topped the presidential race in Iloilo with 728,781 or 54.81% of votes based on partial, unofficial results from the Commission on Elections server, trumping Marcos Jr. who got 459,261 or 34.54% of votes in the province. 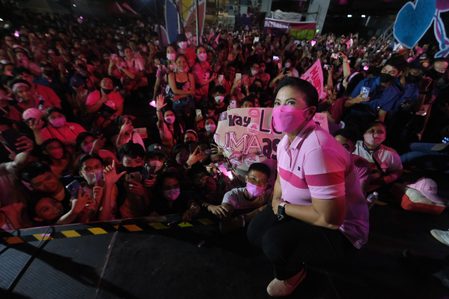 Marcos led in the towns of Anilao, Barotac Nuevo, Estancia, Guimbal, and Sara; and in Passi City.

In 2016, Robredo led in all 42 Iloilo towns and one component city.

Marcos Jr. is now the presumptive president with over 31 million votes based on partial, unofficial results from the Commission on Elections transparency server, with 98.31% of precincts reporting as of 5:56 pm, May 11. Robredo is a distant second with over 14.8 million votes. – Rappler.com

Joseph B.A. Marzan is a Visayas-based journalist and an awardee of the Aries Rufo Fellowship.