DEPLOYMENT. In this photo is a truck with the logo of F2 Logistics, the Comelec's supplies forwarder for the 2022 polls.

Facebook Twitter Copy URL
Copied
The Comelec, however, says the 'ceremonial activity' will push through on Friday night despite the request from the Robredo camp, which insisted they were given 'short notice' about the event

MANILA, Philippines – The camp of presidential aspirant and Vice President Leni Robredo appealed to the Commission on Elections (Comelec) to put off the beginning of its scheduled delivery of vote-counting machines (VCMs) and other automated election system (AES) supplies to several provinces on Saturday midnight, April 2, arguing they were given a short notice about the crucial activity.

The poll body announced on Friday morning, April 1, that it has started loading the trucks that will deliver the AES supplies and equipment from the Comelec’s Sta. Rosa, Laguna warehouse to various hubs nationwide.

Political parties, stakeholders, and members of the media have been invited to witness the sealing of trucks prior to the deployment kickoff on Saturday, Comelec spokesman James Jimenez noted.

However, election lawyer Romulo Macalintal, who represents Robredo, said the vice president’s camp was informed about the ceremony only at 2:39 pm on Friday.

“We would insist that such loading and dispatch should not be conducted at midnight without notifying the candidates at a reasonable period,” Macalintal asserted.

“This is very disappointing especially at this time when the electorate would like to have very transparent activities of the Comelec to ensure that the rights and interests of the candidates are protected as well as the interests of the voters,” he added. 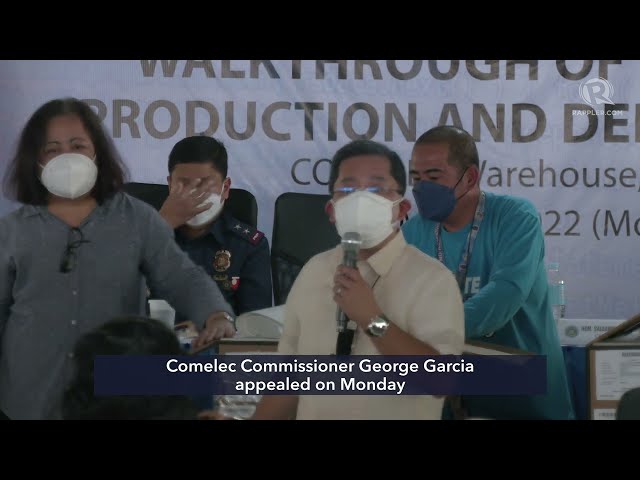 “[Election watchdogs] Parish Pastoral Council for Responsible Voting, National Citizens’ Movement for Free Elections, other political parties, Chairman Saidamen Pangarungan, and the commissioners will be there,” he told reporters on Viber.

Based on the Comelec’s deployment timeline presented to election observation groups on March 14, VCMs are scheduled to be delivered to various provincial transportation hubs from April 2 to April 19.

Election supplies forwarder F2 Logistics, which has drawn scrutiny over its ties to President Rodrigo Duterte’s major 2016 campaign donor Dennis Uy, is in-charge of transporting election equipment to different local hubs across the country for temporary storage pending their distribution to the various polling centers before election day. – Rappler.com