Quezon City went all out for Vice President Leni Robredo, running mate, Senator Francis u201cKikou201d Pangilinan, and their senatorial slate at the Leni-Kiko Proclamation Rally at the Quezon Memorial Circle on Sunday, February 13. Chants of u201cLeni, Kiko!u201d reverberated across the venue while the presidential candidate's motorcade crawled its way to the stage. More than 20,000 supporters showed up and came with their unique and fun campaign paraphernalia, firing up the morning and matching the energy of the indefatigable Robredo who has been barnstorming throughout Luzon since the official campaign period took off five days ago. (VP Leni Media Bureau)

MANILA, Philippines – The camp of presidential candidate and Vice President Leni Robredo took “full responsibility” for the health protocol breach during the Quezon City rally that attracted thousands of “Kakampinks” at the height of the pandemic.

On Sunday, February 13, Robredo’s spokesperson Barry Gutierrez apologized to the Quezon City local government unit (LGU) led by Mayor Joy Belmonte even if the event was technically organized by the Kyusi 4 Leni, a volunteer group mobilizing for Robredo in the country’s most vote-rich city.

“We acknowledge the concerns of the Quezon City Government, extend our thanks for its vigilance, and take full responsibility,” said Gutierrez.

Robredo’s spokesperson issued the apology after the Quezon City LGU issued a “reminder” saying the “Pink Sunday” rally “violated several restrictions that were mutually agreed upon.”

“While crowd control is a highly complicated aspect of large gatherings, it is a test of discipline for the organizers and attendees to show that their chosen candidates observe the laws of the land,” said the Quezon City LGU in its statement.

“We hope that in the future, all coordinators will take this responsibility more seriously,” the statement added.

Quezon City is currently under the more relaxed Alert Level 2, which allows the conduct of public gatherings under certain conditions. 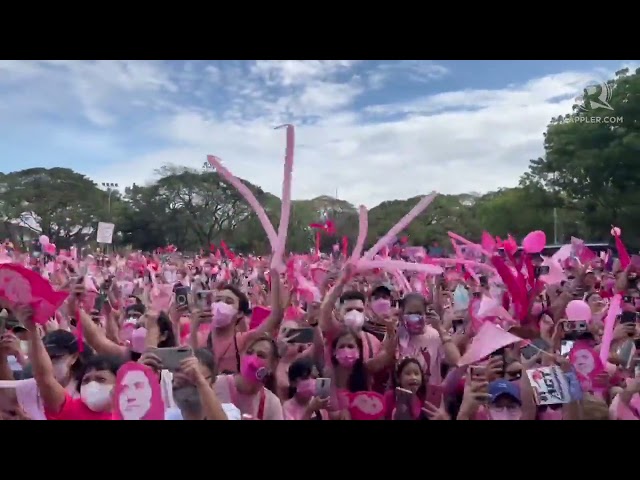 Prior to the event, organizers’ posts and announcements about the “Pink Sunday” gathering at the Quezon Memorial Circle were filled with reminders that only fully vaccinated individuals could attend. Minimum public health standards should also be strictly observed.

But it became impossible for both the organizers and the city authorities to control the crowd following the surge of attendees who flocked to the Quezon Memorial Circle.

The Quezon City Police District said 7,000 people joined the event, but Robredo herself said over 20,000 showed up.

The stage was set up inside the Liwasang Aurora covered court, where seats and access to the public were limited. But the rest of Robredo’s supporters still came together at the Quezon Memorial Circle’s grounds to get a glimpse of the lone female presidential candidate.

Gutierrez noted these in his apology, then assured the Quezon City LGU that the campaign team would take the necessary steps to ensure there would be stricter compliance in future events.

“While the organizers ensured that access to the immediate vicinity of the program proper was limited, and that all attendees were advised to bring vaccination cards and observe health protocols, the sheer number of people that arrived was a challenge, for which we apologize,” said Gutierrez.

“Rest assured the campaign is taking steps to ensure stricter compliance with all applicable regulations moving forward,” he added.

Before Robredo met with her supporters at Quezon Memorial Circle, she first had a brief meeting with Belmonte and other officials in city hall.

Most of the councilors who showed up were wearing pink. Belmonte was wearing a pinkish-red top, but has still not endorsed any presidential candidate.

A few days ago, Gian Sotto said Belmonte “supports” the Lacson-Sotto tandem, but she still has not given her categorical endorsement.

In the 2016 vice presidential race, Robredo lost in this city with 297,999 votes against Marcos’ 412.681. Then-Davao City mayor Rodrigo Duterte, who has repeatedly belittled Robredo’s capability to lead, also won for president in Quezon City in 2016.