Robredo in ‘exploratory talks’ with other 2022 poll contenders 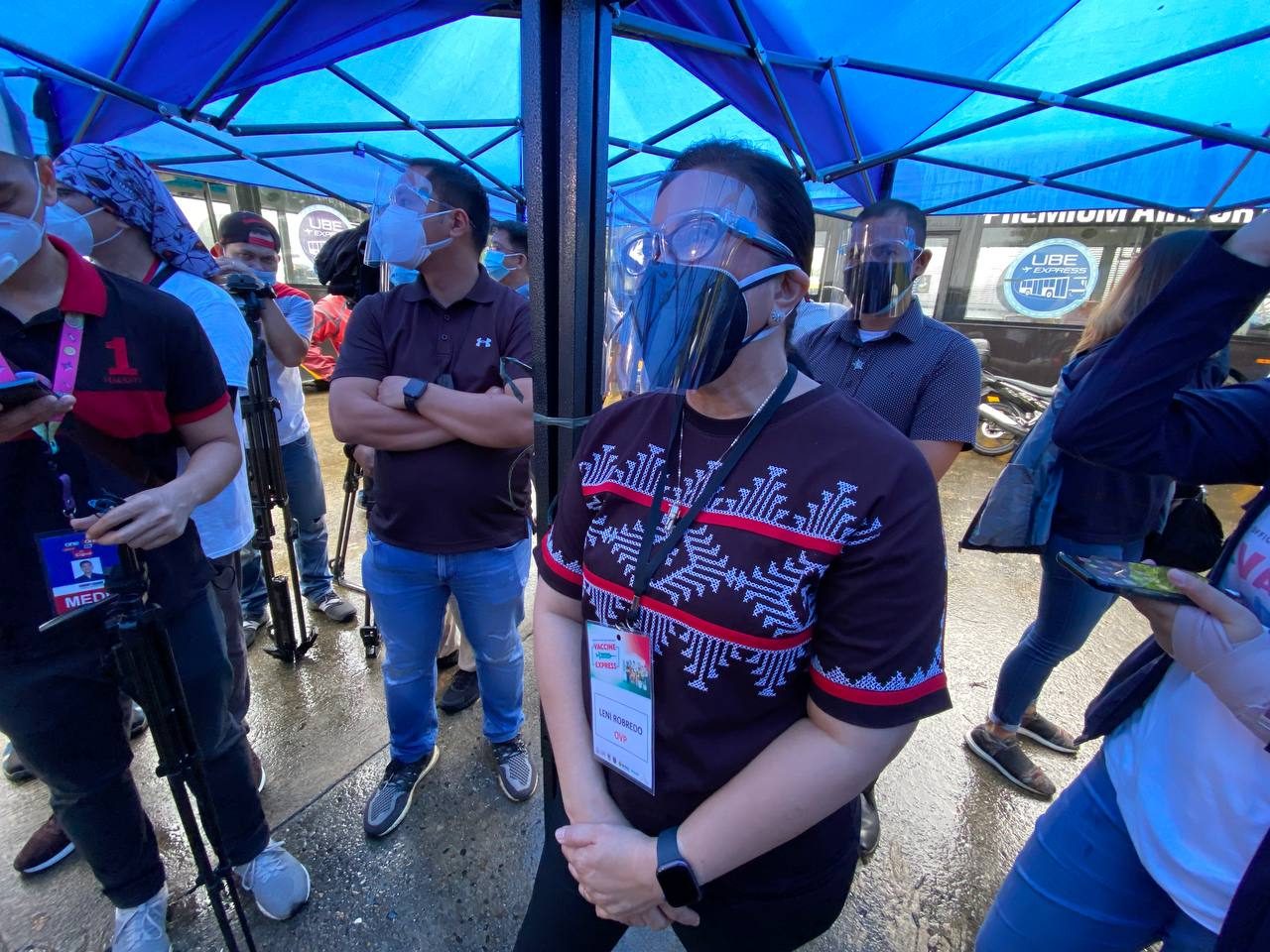 Vice President Leni Robredo talks to reporters on the sidelines of her Vaccine Express project in Manila on July 20, 2021.

Vice President Leni Robredo – the de facto leader of the opposition against President Rodrigo Duterte – said on Tuesday, July 20, that she is currently in “exploratory talks” with politicians whose names are being floated as potential presidential bets in the 2022 elections.

Talks have so far revolved only on issues they could agree on. Robredo said they have yet to discuss who would give way to whom so there would only be one opposition standard-bearer in the polls – believed to be key in ending the Duterte regime in 2022.

Who exactly is Robredo speaking with?

There are several of them, but the Vice President named only Manila Mayor Isko Moreno, who is neither an opposition nor an administration-allied politician but whom the latest Pulse Asia survey shows has the best chances of defeating the survey front-runner, presidential daughter and Davao City Mayor Sara Duterte.

Robredo’s partnership with Moreno for the pilot run of her office’s drive-through coronavirus vaccination project on June 22 tested the waters for a possible 2022 tandem between the two.

But Moreno no longer showed up on Tuesday, when tricycle, pedicab, and delivery riders from the city lined up to get the second dose of their coronavirus vaccine.

It was raining heavily when Robredo, chair of the once-ruling Liberal Party (LP), faced reporters who asked if she is forging an alliance with the wildly popular mayor of Manila beyond the Vaccine Express project.

(There are initial exploratory talks, not just with Mayor Isko but with some other contenders. I won’t just name them for now because I don’t have the authority to say so. But we are in exploratory discussions.)

(What commonalities can we agree on and are we willing to sit down and talk?…. As to who will be the common candidate, we’re not there yet.)

The LP also has its own efforts to talk to Moreno as well as senators Panfilo Lacson, Nancy Binay, and Joel Villanueva to build the “broadest unity possible” in 2022.

The most recent Pulse Asia Research survey indicates that the votes of dissenting forces against Duterte are mainly split among three politicians: Moreno (14%), Senator Grace Poe (10%), and Robredo with (6%).

This vote-splitting trend in pre-election surveys so far tell key opposition figures that they are right in calling for a united front to topple a possible Duterte-Duterte tandem in 2022.

Robredo’s low survey numbers so far are among the factors she is considering as she continues to assess if she should seek the highest post in the land in the next elections.

Rappler sources privy to the Vice President’s discernment process said Robredo wants at least a fighting chance before gunning for the presidency in 2022. Her other options include possibly running for governor in her home province Camarines Sur or taking a break from politics in 2022.

Robredo herself knows some of her supporters are already growing impatient since she has yet to decide on her electoral bid.

But she dispelled notions that she isn’t doing anything at all to help improve her numbers and to build a coalition for the opposition.

(We’re past the point where I’m deciding if I want this or not. But what would be in the best interests of all? What would benefit not myself but the country more?…. Would it be better if I’m the person to run? Or should I just support someone else?)

Robredo admitted that she did not want her supporters to engage in early campaigning for her, as she believes it’s a “sin” to do so when Filipinos continue to grapple with the COVID-19 crisis.

Lacson confirmed on Tuesday, July 20, that they will be a tandem to contend with in 2022, with him running as president.

(I think it’s wrong to do so at this time. What I want to say is that, I know the elections are just around the corner. But to preoccupy myself with the campaign seems like a sin against God.)

Robredo would still prefer to do her duties as vice president first instead of getting preoccupied with the 2022 campaign.

Robredo to supporters: Do what you think is right but…

But with the filing of candidacies in October already looming ahead, the Vice President has changed her tune.

Robredo said her supporters can pursue what they think is the right way to boost her chances in 2022, but they must never lose sight of the pandemic.

(My supporters have the right to do what they want to do. But for me, it’s my responsibility to also remind them that we are in the middle of a pandemic. And I’m happy because I can see on Facebook that they follow my lead.)

The Vice President’s supporters from across sectors have been forming loose groups to help raise her profile as a presidential candidate in 2022, like the Team Leni Robredo movement and the #DapatSiLeni Network.

Robredo’s allies in LP are also building a campaign machinery for her despite persistent attacks from the Duterte government. Party stalwarts like Senator Kiko Pangilinan, LP president, and Senate Minority Leader Franklin Drilon, LP vice chair, maintain that Robredo is the most qualified person to lead post-pandemic Philippines. – Rappler.com