PANDEMIC RESPONSE. Vice President Leni Robredo, a candidate for president in the May 2022 elections, holds a press conference on November 8, 2021.

Facebook Twitter Copy URL
Copied
If elected president in 2022, Vice President Leni Robredo says, she would appoint a health secretary with integrity, technical expertise, and compassion for the people

Vice President Leni Robredo is eyeing an ambitious pandemic response plan worth P500 billion and she wants to appoint a “competent” health secretary to effectively implement this if she wins the presidential race in 2022. 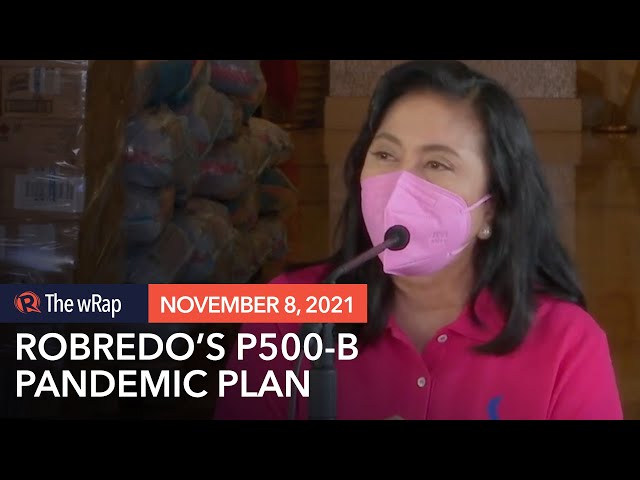 Facing the media along with former Department of Health (DOH) secretaries Manuel Dayrit and Esperanza Cabral – both of whom were wearing Robredo’s pink campaign color – the Vice President said her COVID-19 response plan is estimated to cost some P500 billion.

Robredo conceded it’s a huge amount, but said one needs to be “ambitious” to combat a problem as tremendous as the coronavirus crisis.

(We have to be ambitious because our problem is so big. Our calculation that we’ve already found in the budget is somewhere in the area of P500 billion.) 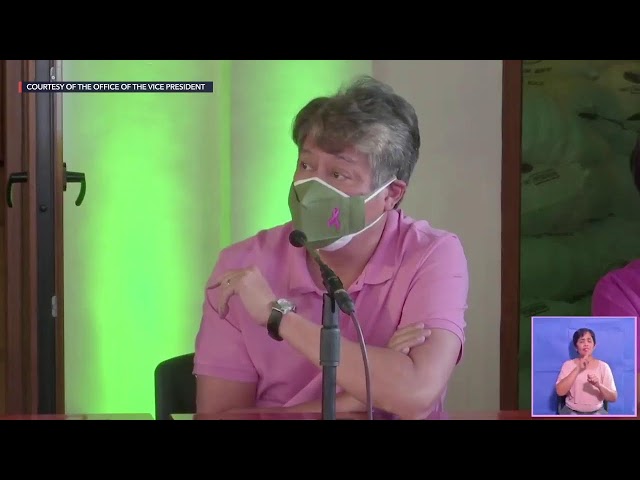 How would she finance this?

Robredo said an initial source of funding would be the multibillion-peso discretionary funds being proposed by President Rodrigo Duterte’s government under the P5.024-trillion national budget for 2022.

If Robredo sits in Malacañang in 2022, she would dedicate the Office of the President’s proposed P4.5-billion intelligence and confidential funds for pandemic relief programs.

Around P54 billion worth of special purpose funds would also be realigned from various agencies to finance key COVID-19 response projects. Her team is currently looking for other possible sources of funding for her pandemic response plans in the 2022 budget.

(We’ve done it already in my office, that even if we have a small budget, we made sure to shift its use for COVID response. It’s possible. We just need to be all hands on deck.)

Robredo has repeatedly criticized Duterte for “misplaced” budget priorities, as his government has allotted huge sums for infrastructure as well as intelligence and confidential funds even during the pandemic.

(Let’s stop corruption, stop anomalies. I will appoint a competent secretary of health. I will choose someone who has a sense of accountability, commands respect across the bureaucracy, understands the processes, has technical expertise, and has compassion for the people.)

Without directly mentioning Duque or Duterte, Robredo said what is lacking in the Philippines’ pandemic response is decisive leadership that could have quelled the spread of COVID-19 early on if officials had been quick enough to act.

He recalled a February 4 Senate hearing where the DOH secretary was caught unaware that 31 of the around 90 passengers of a plane that landed in Manila from Wuhan, China – where the outbreak started – already had symptoms.

(When we asked if contact tracing was done, he said no because they were already discharged from hospitals. So just from there, you can already see a lack of leadership and serious response to COVID-19.)

This was echoed by both Dayrit and Cabral, who were among the public health experts who helped Robredo craft her “Kalayaan sa COVID“ (Freedom from COVID-19) plan that she announced for the first time last Wednesday, November 3.

Dayrit said one of the Duterte government’s “biggest miscalculations” was its dilly-dallying at the start of the pandemic. Dayrit was DOH chief when the Philippines was able to contain the SARS outbreak from 2002 to 2003.

(During the SARS outbreak, we swiftly acted there. But here, response is not just slow, but the virus is more transmissible, so it was able to enter our borders immediately. And when it did, it spread in the community and we had a difficult time managing the situation because there was panic already. So it was early response and really early organization – that’s what we could have done better.)

Cabral also hit the pace of the Duterte administration’s decision-making during the health crisis and its communication strategy in telling Filipinos what they needed to do to prevent the spread of the virus.

(We’ve been saying that we all know what needs to be done; it’s just a matter of doing it now and doing it at scale. Meaning, you do it in a widespread manner and you do it fast. That means, just like what Dr. Dayrit said, you can’t postpone it for tomorrow or next week. You should’ve done it yesterday.)

Robredo has long been frustrated by the Duterte government’s pandemic response and was at one point even “tempted” to tell the President to just let her handle matters.

The Vice President has drawn praise for running pandemic relief drives despite her office’s measly annual budget. Robredo said her performance is a preview of what she could achieve if she becomes president in 2022. – Rappler.com