Presidential candidate Leni Robredo waves to supporters before delivering the final speech of her campaign in their Makati miting de avance on May 7. 2022.

MANILA, Philippines – Vice President Leni Robredo ended the campaign for her presidential bid as she reminded her supporters that there will always be room to make a stand, hope, and to know that no matter what happens on election day, that they were part of a historic campaign.

(We have learned that those who had opened their eyes will never shut them again. We will forever bring with us the noble cause that called us to participate in this crusade.)

“Karapatan nating magkaroon ng kinabukasang may dignidad, at tungkulin natin na ipaglaban ito. Natutunan natin, walang imposible,” she added. (We have the right to a future with dignity, and we have the duty to fight for it. We have learned that nothing is impossible.)

Robredo rallied her “kakampinks” to keep the faith ahead of election day, May 9, knowing her ratings in the latest pre-election surveys were far from a guaranteed win. In Pulse Asia’s April survey, Robredo had a 23% preference rating – a far second from former senator and dictator’s son Ferdinand Marcos Jr.’s 56%.

The final stretch of Robredo’s campaign saw an unprecedented level of volunteers visiting houses and communities to convince more Filipinos to choose her and her running mate, Senator Francis “Kiko” Pangilinan, for the country’s top two posts.

The will to take action

Robredo’s heartfelt speech was something of a look-back at her vice presidential term.

The Vice President acknowledged the youth movement in her campaign, and said that she saw herself in them. Once a young person who also stood on the sidelines, she found herself making a stand when there were resisting forces, especially during her term for the past six years.

“Nagbabad tayo sa mga komunidad, nakinig tayo sa mga pinagdadaanan ng ating kapwa. Dahan-dahan ang pagdating ng pagkamulat. May mali sa sistema. May magagawa ako para itama ito,” she said. (We immersed in communities, we listened to the experiences of our neighbors. Slowly, we opened our eyes. There is something wrong with the system. I can do something to correct it.) 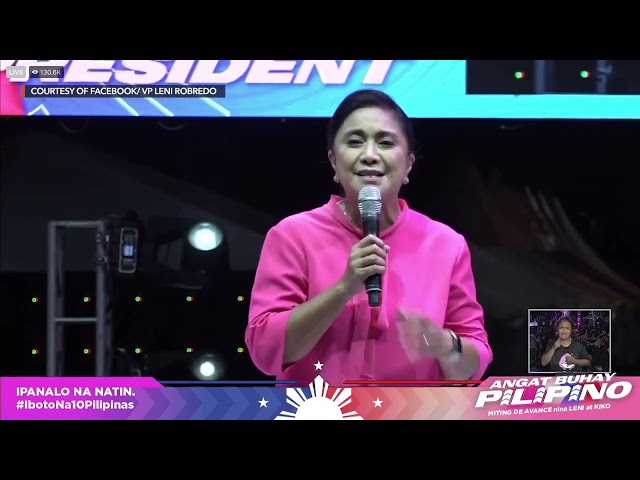 Robredo recalled when President Rodrigo Duterte removed her as chair of the Housing and Urban Development Coordinating Council when she could have improved the housing situation in the country. She remembered when she accepted Duterte’s invitation to become co-chair of the Inter-Agency Committee on Anti-Illegal Drugs, even if others told her it was unlikely to be genuine.

“[Tinanggap] natin ang pagiging drug czar kahit na alam natin na isa itong patibong, dahil naniniwala tayong kung may kahit isang buhay na maililigtas, dapat gawin natin ang lahat,” she said. (We accepted the drug czar appointment even if we knew it was a trap, because we believe that if we could save at least one life, we should do everything.)

In her work, Robredo said that she always went back to the question: “Ano ang puwede nating gawin (What can we do)?” She told her supporters that they have done the same – they have found ways to take action, despite their various contexts and stories.

“Ang kapangyarihan, hindi kailanman maaagaw mula sa kamay ng taongbayan. Kung sakaling may magtangkang agawin ito, pumapalag tayo,” she said. (Power will never be stolen from the hands of the people. If someone tries to take it, we resist.)

Robredo recalled that when she decided to run for the presidency, no surveys said she had a chance to win.

(No survey said that if I took a stand, there would be people to stand by me. But I never had a doubt. I never lost hope, because I know that Filipinos love their countrymen.)

She said that she saw this love as volunteers came together to offer their time, effort, and talents to the campaign. The love was present as they prepared food for their fellow supporters in the fatigue-inducing, hours-long rallies in the sun, she said. Every Filipino knows how to love, Robredo said, as she outlined the dream that she thought every Filipino deserved: a country where no one would go hungry, where every citizen could get medical attention whether or not they had money, and where all Filipinos could own their own homes.

In choosing leaders based on their love for country, Filipinos could have fast and efficient transportation systems, and a working justice system that saw the innocent go free, and the guilty held accountable, she said.

Robredo did not promise that this dream could be achieved in an instant, and that the country’s problems would go away overnight.

(But my vow is this: in the path towards the solution, the government will free you from the things weighing you down. It will rush to your side when you experience difficulties. It will spend all its time, every piso of our taxes, and all its strength to uplift the lives of every Filipino.)

The ‘natural’ inclination to hope

From the radical love Robredo constantly called for, she urged for her supporters to continue to hope at the end of the vigorous campaign. She asked them to remember the lessons they learned from immersing in communities and understanding what ordinary Filipinos wanted for the nation.

(We learned that it will always be more radical to love. Tearing down the old and rotten system begins with ending conflicts, in recognizing the value in each of us, and in asserting the truth…. True love embraces all. It breaks away from its comforts, leaving no one behind or turning their backs on them.)

Robredo said trust and charity were the weapons against political machinery. When she declared her candidacy, she said could count with her fingers the people who stood in front of her. “Now, I cannot see the end of all the people with us today,” she said in Filipino, as she motioned to the length of Ayala Avenue.

The rescue team and organizers estimated the crowd at 780,000 – the biggest turnout in the Robredo-Pangilinan rallies.

“Higit sa lahat, palaging may pag-asa. Likas sa tao ang itutok ang mata sa abot-tanaw ng mas maginhawa na malayo sa pagdurusa,” she said. (Most of all, there will always be hope. It is natural for a person to focus their eyes on the horizon of a better life, far from suffering.)

Robredo’s final request to her supporters was to pray, to thank the people who were with them in the fight, and free themselves from doubt.

“Trust that at the end of all the sweat, time, and sacrifice, there is a victory waiting for us,” she said in Filipino.

Robredo was introduced by her children – Aika, Tricia, and Jillian. Stars also came in full force to support the tandem, including Vice Ganda and Miss Universe 2018 Catriona Gray, who had both earlier endorsed Robredo, as well as her sectoral supporters such as the Sumilao farmers.

Robredo won the 2016 vice presidential election against Marcos Jr. with a slim margin of around 263,000 in their 14 million-count. – Rappler.com