GRAND RALLY. Tens of thousands cheer on Leni Robredo, Kiko Pangilinan, and their senatorial candidates at the grand rally in Iloilo City on February 25, 2022.

ILOILO CITY, Philippines – Thirty-six years after the Philippines ousted a dictator, 40,000 people packed the Iloilo Sports Complex to see and hear the woman who promised to stop the return of old, dirty politics to Malacañang.

Ilonggos started lining up around noon, enduring the heat of the sun for four to five hours until celebrities started appearing on stage. 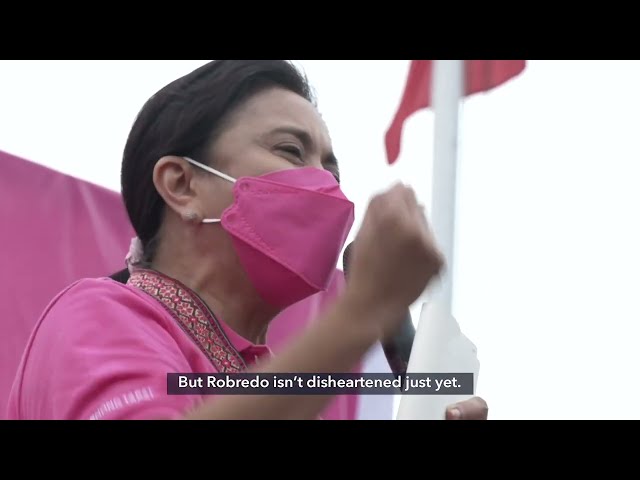 On Friday, February 25, Vice President and presidential candidate Leni Robredo arrived at the back of the sports complex on a pink truck before walking through the thick crowd, with daughters Aika, Tricia, and Jillian following closely behind her.

The Hiligaynon version of the “Kay Leni Tayo” song blared in the background, but it was no match to the people’s deafening cheers.

As Robredo inched closer to the stage, her pink-clad followers moved along with her, like devotees aching to touch their saving grace in the most desperate of times.

It’s the first time during the pandemic that Ilonggos gathered together in this scale. COVID-19 forced them to celebrate their grand Dinagyang Festival virtually for the second straight year in January. All their pent-up energy and emotions seemed to have been released the day they screamed Robredo’s name. “Hala Bira Leni-Kiko,” read many of the Hiligaynon posters in the arena. It means to “dispense all means,” to pour everything they can for Robredo and her running mate Senator Kiko Pangilinan.

It was a night that evoked memories of the 1986 EDSA People Power Revolution, which saw defiant Filipinos swarming EDSA to end the dictatorship of Ferdinand Marcos.

The bloodless revolution earned the Philippines the respect of the entire world. But three decades later, the son of the dictator Marcos has become the survey frontrunner among presidential candidates.

While Robredo remains in far second place in these surveys, she isn’t disheartened just yet. If anything, seeing the huge expanse of pink-clad Ilonggos going wild at the stadium further fueled her confidence that she would win once again by a landslide in the province.

She overwhelmingly defeated Marcos Jr. in the Iloilo province and Iloilo City in the 2016 vice-presidential race with 711,391 votes against his 128,189 votes.

During her biggest political rally yet, Robredo did not even have to directly mention the Marcoses or her rival for the people to know that when she talked about leading a clean, excellent, and consultative government, she is out to defeat the kind of leadership and governance that the dictator’s family represents.

She said the true spirit of EDSA remains alive to this day – from People Power to the People’s Campaign that her supporters are now waging for her.

(This is the energy that we are rekindling today. This is the strength that you have awakened. And in our victory in May, we are going to bring with us the lessons of the past 36 years: That the strongest unity rests on truth and justice; that it isn’t just colors or names that we have to change.)

Under her administration, Robredo said dirty politics would be trumped by a government that actively listens, and one that actively searches for the most needy to provide them the tools to get the life they deserve.

(What we are going to build is a system that favors no one, not even relatives, because it seeks to empower everyone and treats every Filipino as part of the nation’s family.) 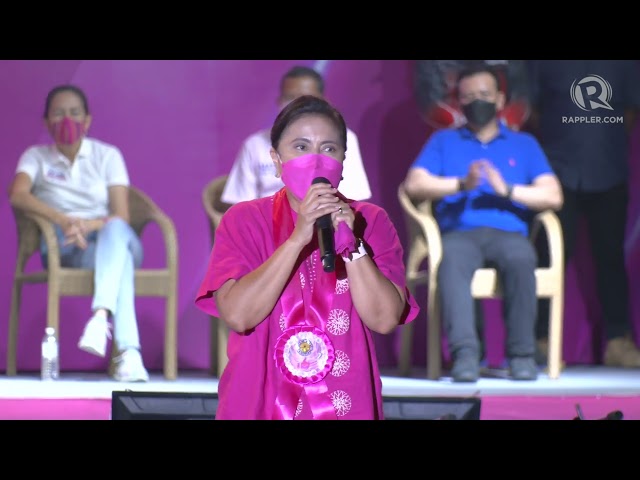 Drilon, Defensors, and Treñas go all out

Political leaders in Iloilo pulled all the stops to show Robredo that Ilonggos’ support for her has not waned all these years.

Speaking in Hiligaynon onstage, Iloilo City Mayor Jerry Treñas said he had never seen such a big political rally in the city. In the run-up to the event, Treñas’ social media channels were filled with reminders and posters hyping up the People’s Rall.

Not to be outdone, Iloilo Governor Arthur Defensor Jr. asked Ilonggos for one thing: They gave Robredo over 700,000 votes in the 2016 vice presidential race; they should give her more in 2022.

He had accompanied Robredo in most of her mini sorties around the province on Friday morning til the afternoon. He had even personally supervised the final preparations for the grand rally after his morning jog, the governor almost unrecognizable in his plain shirt and jogging shorts. His brother, Iloilo City 3rd District Representative Lorenz Defensor, hosted Robredo and her slate during the afternoon rally at Pototan town.

Their father, former governor and lawmaker Arthur Defensor Sr., recalled the days he helped recover the ill-gotten wealth of the Marcoses as former head of the Presidential Commission on Good Government. The patriarch said before the Iloilo Sports Complex audience that the next president must be a woman, not a man – especially not someone who has stolen from the nation’s coffers.

Senate Minority Leader Franklin Drilon, who was born and raised loilo City, had a leg injury on that big day. He had to lean on the shoulders of his male assistant to walk to the center of the stage, but the Big Man of the Senate still knew how to rile up the crowd.

The devotion and sacrifice of Iloilo was not lost on Robredo. At the start of her speech, she told them, “Kahit Bicolana ako, pakiramdam ko parang Ilonggo na ako (I may be a Bicolana, but I feel as if I’m an Ilonggo already.)”

Another kind of People Power

The legacy of the People Power Revolution was palpable during Robredo’s political rally at the Iloilo Sports Complex.

(We have to work together to address poverty, hungry, and hopelessness. These are the biggest problems of today, and it is People Power when we work together and take a chance with leaders with principles.)

Several of the Robredo-Pangilinan tandem’s senatorial bets also took turns acoring the recalling the abuses of the Marcos regime.

Detained senator Leila de Lima’s representative, Dino de Leon, said that what the Senate needs are smart candidates who do not fake their diplomas – a jab at Ferdinand Marcos Jr. who had lied about getting a degree at Oxford.

Former Ifugao representative and senatorial candidate Teddy Baguilat Jr., garbed in his traditional “bahag” (loincloth), said the Leni-Kiko slate would prove there is no “Solid North” being commanded by the Marcoses.

Senatorial aspirant Neri Colmenares, a Martial Law survivor, asked the crowd to “lampaso” or decimate the candidate who visited the province a day earlier.

He was referring to Marcos Jr., who held two rallies in the province on the eve of the People Power anniversary. Colmenares backs Robredo, but isn’t officially in her Senate ticket.

Robredo’s grand rally in Iloilo was attended by celebrities like Pangilinan’s wife, megastar Sharon Cuneta, celebrity couple Cherry Pie Picache and Edu Manzano who is Ilonggo, comedian Ogie Diaz, and performers like Rivermaya, Bituin Escalante, JK Labajo, and other celebrities and influencers. Jose Mari Chan, also an Ilonggo, and Marjorie Barretto were among those who sent video messages of support.

Diaz said that since he supported Robredo, he had been bashed nonstop on social media and that the comments were “below the belt.” How did he deal with it? “Kaya ngayon, hindi na ako nagbebelt (So now, I stopped using a belt),” he joked.

After the Vice President’s speech, former Eraserheads frontman Ely Buendia appeared on stage, further elevating the mood of the crowd, who erupted in another round of cheers. His presence at the event was highly anticipated, especially since he had “joked” about an Eraserheads reunion if Robredo would run for president. He rekindled the people’s nostalgia for the good old days as he sang hits like “Alapaap,” “Ligaya,” “Pare Ko,” “With a Smile,” and “Ang Huling El Bimbo.”

Behind him was the standee of reelectionist Senator Leila de Lima, who managed her campaign from within her jail cell in Camp Crame as the most high-profile political detainee under the Duterte administration.

As Buendia rocked his tunes, Robredo danced to the music along with her daughters Aika, Tricia, and Jillian – bonding time for the widow and mother of three who had to sacrifice so much for the call of duty.

But Robredo’s star still shone the brightest that night.

Robredo told the high-energy Iloilo crowd that no matter how hard the fight, she is out to win in 2022.

(I have my full trust in Ilonggos; I also fully trust Filpinos: We are going to face all kinds of obstacles with our united strength. There would be more people on the streets; the bicycle parades would get longer; more people would write on cartolinas using pentel pens like what you are doing now.)

(The days of old and rotten politics are numbered. Can’t you feel it? Our People’s Campaign is is turning into a crusade.) 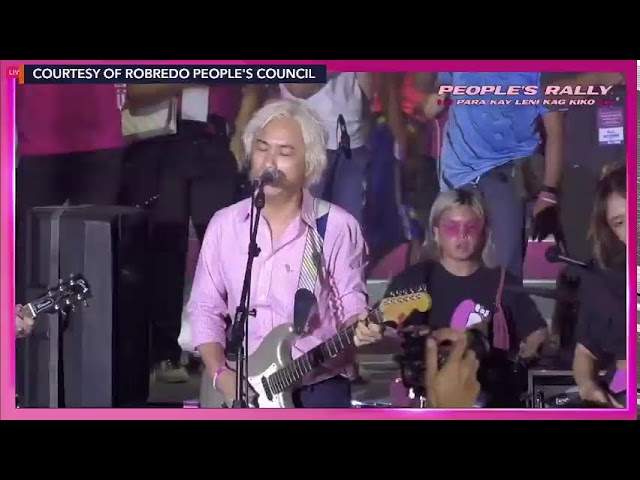