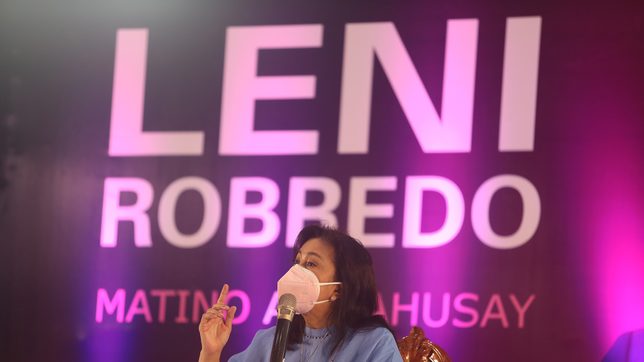 Presidential bet and Vice President Leni Robredo discusses her 2022 platform in a press conference held at the Sorsogon City Gymnasium in Sorsogon province on October 29, 2021.

If Leni Robredo becomes the next Philippine president, she wants her infrastructure program to focus on rural development so it would have a “direct impact” on helping uplift the lives of farmers and fisherfolk in rural areas.

The Vice President and opposition leader told reporters in Sorsogon City on Friday, October 29, that her infrastructure program would be designed in a way that it would spur rural development instead of just benefitting the so-called “Imperial Manila.”

(Our infrastructure should spur rural development because right now, development is so much concentrated in Metro Manila. We have to go beyond. But we wouldn’t be able to do that if we do not prepare the different provinces across the country.)

The Vice President said she would continue President Rodrigo Duterte’s “Build, Build, Build” infrastructure program, but she would rather make more investments that would make it much easier for farmers and fisherfolk to cultivate and sell their goods at a higher price.

These include building and setting up farm-to-market roads, cold storage facilities, solar dryers, and even “simple” projects like fish cages.

(So for me, we would continue the “Build, Build, Build” program, but we would make sure that the money going into infrastructure projects would have a direct impact on uplifting the lives of those on the margins of society.)

The Vice President also said that beyond building or fixing roads and bridges, she also wants to address the country’s perennial mass transportation problem.

(It’s okay for us to add more roads, but if we are not going to fix the mass transport system, the people who are still hoping for solutions, the people who continue to commute, they would continue suffering.)

The Vice President earlier criticized the Duterte government for belittling the traffic crisis in the Philippines.

Robredo also hit the President for his misplaced priorities in the proposed P5.024-trillion budget in 2022, as the government would rather give more funds for its big-ticket infrastructure projects instead of financing the health sector during the coronavirus pandemic. – Rappler.com