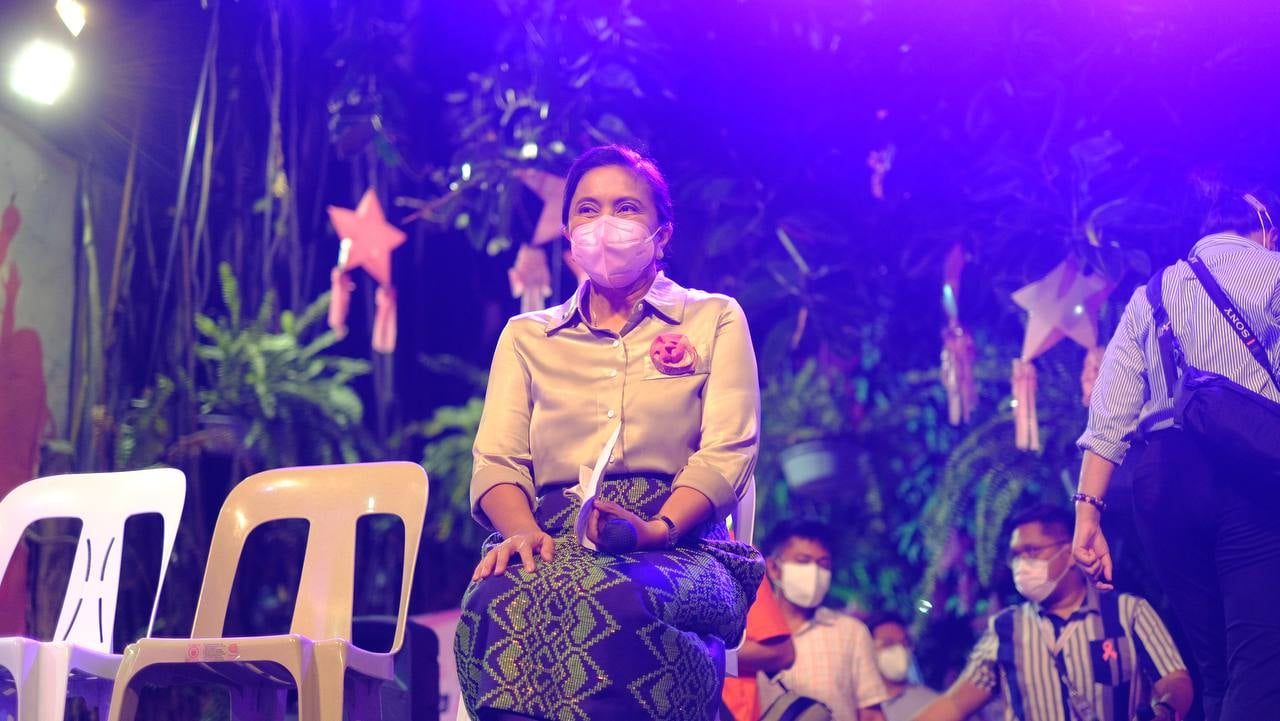 Photo from LGBTQIA+ for Leni

Facebook Twitter Copy URL
Copied
Leni Robredo gets the endorsement of national artists, senior citizens, and members of the LGBTQIA+ community on their 'Day of Roses'

MANILA, Philippines – After their Pink Sunday, Vice President Leni Robredo and her supporters continued to hold Quezon City ablush as they continued to campaign on Valentine’s Day, laying claim to the event as Araw ng Mga Rosas (Day of Roses).

“I love VP Leni,” reads another.

Robredo attended at least 3 events on Monday starting with a program with National Artists for Leni, where Filipino cultural icons such as Ryan Cayabyab, Virgilio Almario, Alice Reyes, Benedicto Cabrera aka BenCab, and Ramon Santos.

The national artists declared their support for Robredo, calling her as the only viable candidate who would protect the country’s history, culture, and arts. (READ: Networked Propaganda: How the Marcoses are rewriting history)

Robredo was the only one who responded to their call for holding a “kartilya” – guiding principles – that advocated for developing the Filipino creative industry, protecting the country’s history, and protecting the right to free speech.

“Leni is my president, because she is the only one I see who can conduct our country to the direction that would lift all of us Filipinos,”  said renowned musician and conductor Ryan Cayabyab.

“She’s everything the current president is not. She’s the only hope of our country,” said painter BenCab, who relayed his message through a video played inside Miriam College in Quezon City.

Robredo then headed to a program hosted by Seniors4Leni, which represented senior citizens backing her presidential bid.

The vice president and her running mate, Senator Francis Pangilinan, signed a “covenant” with the group, which entailed the candidates fighting for a country promoting the rights of senior citizens, if ever they triumph in the May polls.

Robredo closed her day with the LGBTQIA+ for Leni, which held a Martsa Para Sa Pag-Ibig (March for Love) from the Commission on Human Rights headquarters in Diliman, up to the Robredo-Pangilinan campaign headquarters in Katipunan.

At their headquarters, the volunteers handed Leni 14 pink roses that represented their “dreams for a tomorrow where we can freely love.”  (READ: 73% of Filipinos think ‘homosexuality should be accepted by society’ – report)

The roses represented visions for a Philippines with same-sex civil unions, safe spaces, no stigma against HIV-positive Filipinos, and overall, “a country without fear of judgment.” Robredo then signed a covenant that would promote this vision.

“At least before my Valentine’s ended, I found a date,” Robredo said, referring to her supporters. – Rappler.com

Valentine’s Day: The pressures of shopping for romance