Robredo on Marcoses’ tax debts: It shows how ‘unqualified’ Bongbong is for presidency MANILA, Philippines – Presidential candidate and Vice President Leni Robredo did not mince words against her rival, presidential race frontrunner Ferdinand “Bongbong” Marcos Jr., when asked about the P203 billion in unpaid estate taxes by his family.

Facing reporters after the end of the Commission on Elections’ first presidential debate for the 2022 polls on Saturday, March 19, Robredo hit Marcos for aspiring to become president knowing his family owes the Philippine government billions in unpaid taxes.

“Sa akin, it says a lot about the kind of person that he is and how unqualified he is for the presidency. Kasi na-imagine mo ba na somebody na aspiring to be president, napakalaki noong utang sa pamahalaan? Hindi naman ‘yun puwede,” Robredo said.

(For me, it says a lot about the kind of person that he is and how unqualified he is for the presidency. Can you imagine somebody aspiring to be president yet he owes the government so much money? That can’t be right.)

(But he gets away with it because of disinformation, because of propaganda. So this isn’t just my problem because he is my rival, but this is a problem that affects all of us.) 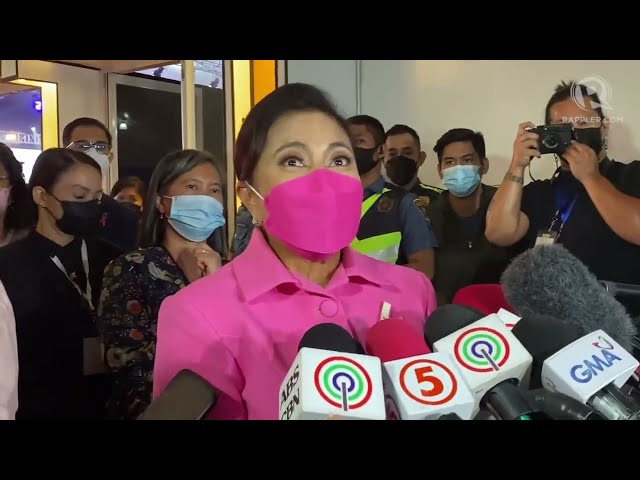 Marcos is Robredo’s bitter rival, as she had defeated him by a narrow margin in the 2016 vice-presidential contest. He tried to contest her victory before the Supreme Court, but the justices later unanimously junked his case. Now, the two are going head-to-head again in 2022, and Marcos is dominating based on major pre-election surveys so far.

It was Manila Mayor Isko Moreno who first demanded the Marcoses pay their tax debts during the debate, which was then supported by Robredo, Senator Panfilo Lacson, and labor leader Leody de Guzman.

The Bureau of Internal Revenue and the Presidential Commission on Good Government both confirmed they have been trying to collect unpaid estate taxes from the heirs of the dictator Ferdinand Marcos, which were worth P23 billion in 1997. But estimates of lawyers contesting the dictator’s son Bongbong’s presidential bid in 2022 said the amount has reached over P203 billion already.

Bongbong, who is now gunning for the presidency, is the only son and namesake of the dictator, whose 21-year rule was marred by rampant corruption, killings, torture, disappearances, and media oppression.

The patriarch was eventually deposed in the bloodless People Power Revolution in 1986. But the Marcoses have successfully returned to politics since then, using their vaunted money and machinery in their attempt to revise history and sanitize their image through disinformation networks online.

Fact-checks done by fact-checking initiative Tsek.PH since the start of January 2022 showed Robredo has been the top target of disinformation, which in turns benefits Marcos. – Rappler.com