Supporters of presidential candidate Vice President Leni Robredo in Echague, Isabela, hold a candle-lighting ceremony in front of the mural erased by the Comelec on February 17. 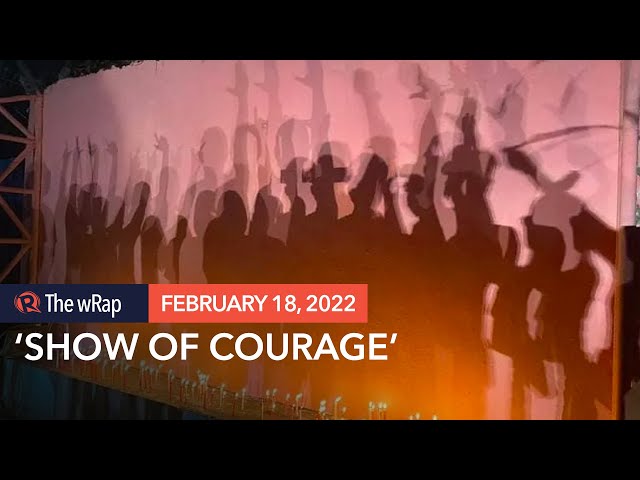 MANILA, Philippines – Volunteers of Vice President Leni Robredo and Senator Francis “Kiko” Pangilinan in Echague, Isabela, said they are even more determined to fight for their right to express support for the tandem after the Commission on Elections (Comelec) removed the mural that they voluntarily created for their candidates.

The volunteers held a candle-lighting ceremony in front of the covered up mural, which they had coated with plain pink paint, the color of the Robredo-Pangilinan campaign, on Thursday, February 17. 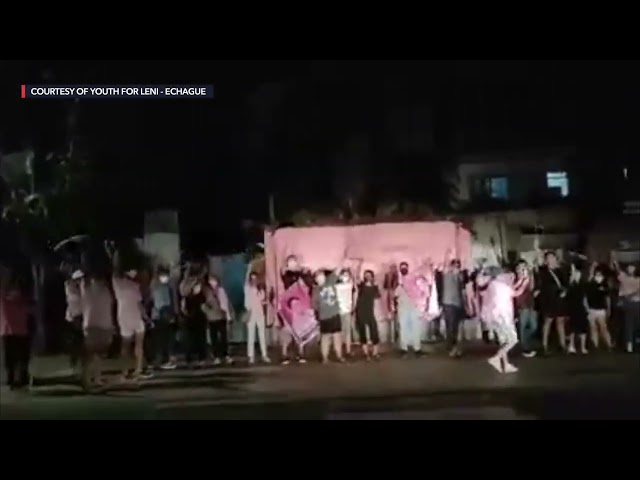 Just before midnight on Thursday, Robredo re-shared videos of the Isabela Para Kay Leni-Kiko Facebook page showing a handful of her supporters holding a candle-lighting ceremony in front of the covered up mural.

(Thank you so much for your bravery and for taking a chance on our country. More power to you.)

In the videos, Robredo’s supporters also held up posters and pink ribbons as they chanted “Leni! Leni! Leni!” along the sidewalk.

They did this knowing all too well that they are in the so-called “Solid North” territory, where votes have been traditionally commanded by the family of Robredo’s rival, survey frontrunner Ferdinand “Bongbong” Marcos Jr.

But hours later, by Friday, February 18, someone “vandalized” the same wall and wrote “BBM for pres,” in reference to Marcos who has so far outpaced all presidential candidates in pre-election surveys.

(You like saying “Respect my opinion,” but you can’t even respect private property? This just further strengthens our resolve to fight.)

The mural erasure in Echague was not an isolated incident in Isabela province either, as Comelec personnel had entered the Robredo volunteers’ headquarters in nearby Santiago City on Wednesday, February 16, to dismantle posters and tarpaulins there even if they did not have a warrant to enter the private property.

A day later, all eyes were in the town of Echague after Comelec personnel covered up a Robredo-Pangilinan mural that was painted on a wall within a private property owned by the tandem’s supporter.

The Comelec officer said the mural removal was part of the poll body’s “Oplan Baklas” initiative, a now-controversial operation after Comelec personnel from across cities nationwide entered private properties without warrants to dismantle Leni-Kiko posters and tarpaulins for supposedly violating the prescribed sizes.

The Comelec staff in Echague were escorted by armed cops when they removed the Leni-Kiko mural.

Election lawyers have argued that private citizens are not supposed to be covered by regulations on what constitutes lawful election propaganda.

The Robredo and Pangilinan camps are now mulling to file cases against the Comelec for what they have described as its “unconstitutional” actions.

In an ANC Rundown interview, Comelec spokesperson James Jimenez  clarified that Comelec personnel had asked permission from the property owner in Echague before erasing the Robredo-Pangilinan mural.

“What was not being said was that in those cases when they entered into private spaces, the people had asked for permission…. We do not go invade private spaces,” said Jimenez.

He also clarified that his earlier position regarding murals not being covered by the Comelec’s rules was particularly meant for murals put up by barangay officials before the campaign period, not the ones made by campaign volunteers for their chosen candidates.

Still, Jimenez said Comelec was open to reviewing their policies.

“One of the benefits I think of what’s happened recently is that it’s has given an opportunity to sort of pause and revisit a lot of these policies. So I think the Comelec is at this point not averse to listening to the different opinions of people and that might be a good way to move forward,” he said. – Rappler.com

LIST: Who is running in Isabela in the 2022 Philippine elections?