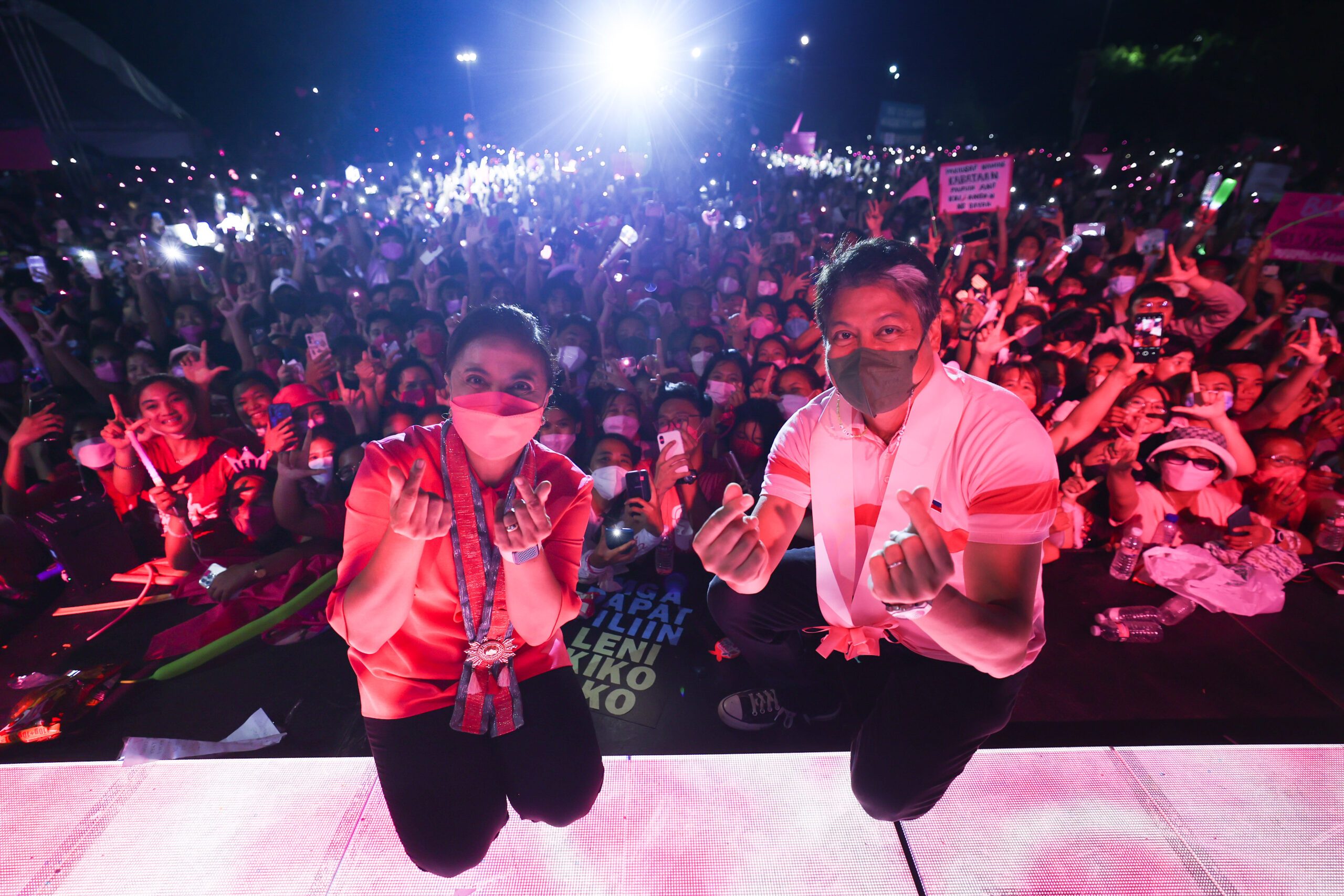 DAGUPAN CITY, Philippines – Pink is spilling out of cracks in the so-called Solid North, as tens of thousands of Vice President Leni Robredo’s supporters came together in Dagupan City in Pangasinan to cheer on her bid for Malacañang.

As of 7 pm on Friday, April 8, local police said some 60,000 “Kakampinks” have converged at the CSI Stadia for the grand rally of Robredo and her running mate Senator Kiko Pangilinan. That numbered further swelled to 76,000.

Robredo gathered the huge crowd with just days remaining before the day of reckoning. Hours before her grand rally here, Robredo already expressed optimism about winning the 2022 presidential elections.

“If there is one lesson na natutunan ko sa mga eleksyon, it’s not over ’til it’s over,” said Robredo in an ambush interview by the media on Friday, April 8, during her visit to this vote-rich province.

(If there is one lesson I have learned in the elections, it’s that it’s not over ‘til it’s over)

Robredo spoke at the University of Pangasinan forum, “The Education President: Interviews with Presidential Aspirants on Philippine Education,” a series where presidential candidates take turns discussing issues close to students and educators. The audience was around 1,500.

The Vice President and her running mate Senator Kiko Pangilinan later had two mini rallies in Bani and Villasis towns before the the night-time grand rally in this city.

Robredo also visited Archbishop Socrates “Soc” Villegas of the Archdiocese of Lingayen-Dagupan, who blessed her after a welcome by seminarians, nuns, and the laity.

Robredo stressed the need to revamp the history curriculum to give the youth greater awareness of the country’s past and lessons.

“Not just about the Marcos era,” she told reporters in Filipino. “Everything that can help prevent us (from committing) the same mistakes over and over again.”

When asked if the Estrada administration should be included, Robredo said, yes, everything that has contributed to the problems of the country.

Discussing “all the corruption that happened, and people’s reaction to corruption,” are important, she said, to warn officials that accountability awaits.

Pangasinan, one of the four provinces comprising the Ilocos Region, has long been a stronghold for the Marcoses.

Discussing the results of most recent Pulse Asia survey, conducted from March 17 to 21, showed Robredo rising percentage points (+9) increase, from 15 to 24% of respondents, the Vice President said it showed the efforts of her volunteers have made a difference.

(This is a big deal because our supporters can really see how their hard work has left a mark. But we already saw this before the results came out. We saw this in provincial surveys. We saw the upward trajectory. And the best thing is, it shows we really have the momentum.)

Robredo told reporters that she also came from behind in the 2016 vice presidential race.

She added that former vice president Jejomar Binay had a similar arc during the 2010 elections.

Robredo remains far behind Marcos’ 56%, which was four percentage points down from his February 2022 numbers.

The Vice President trusts her surging momentum and thanked her supporters, including those from Pangasinan.

Second attempt to a hostile land

The province, with its independent city capital, Dagupan, has the third biggest number of voters (2.1 million) in the 2022 elections. Only Cebu province (3.3 million, with w/ Cebu City, Lapu-Lapu City, and Mandaue City) and Cavite (3.2 million) have more voters.

Robredo, however, thinks she would fare better in Pangasinan this time.

(I am more hopeful now that I will get higher numbers. Now there are volunteers who are self-organizing, volunteers who never tire of making rounds, active involvement from various sectors, we did not have this before).

Robredo supporters were hoping for a possible endorsement by Governor Amado Espino III, whose face has lately appeared in tarps and banners for all the five leading presidential candidates.

Robredo paid a courtesy call on Espino before proceeding to her Bani rally, but there was no word of any endorsement.

Sources in the province said Robredo was able to get nine of 12 board members but none has so far confirmed this.

During Robredo’s Pangasinan sortie, videos surfaced that jeepneys ferrying her supporters were being pulled over. Organizers called out for help in transporting them to the venue via Twitter.

Chel Diokno, a senatorial bet in the Robredo slate and chairperson of the Free Legal Assistance Group, said those behind the intimidation of their volunteers and supporters can be “administratively and civilly liable.”

Diokno put out an announcement that the group Lawyers for Chel is open to receive reports and assist. They can be reached via these channels:

“In the fact of these pernicious threats to a free and honest election, we encourage all Filipinos to continue to exercise and assert their constitutional right to free expression and assembly,” said Diokno. – Rappler.com