Opposition leader and Vice President Leni Robredo shrugged off the string of attacks against her by Manila Mayor Isko Moreno, as she said on Friday, October 15, that the country has far bigger problems than these.

(You know, I’m going to be a gentleman here, okay? I don’t want to engage him, because we have far bigger problems. I think this would just lead to nowhere.) 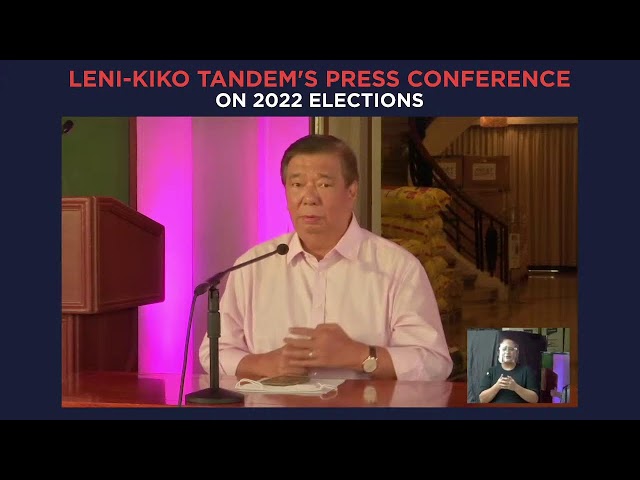 Moreno had been displeased when the Vice President disclosed to reporters on October 8 that one of the reasons that pushed her to seek the presidency was the Manila mayor’s position toward the late dictator Ferdinand Marcos and his family.

One of the presidential contenders that Robredo and Moreno will be facing in the 2022 polls is the dictator’s only son and namesake, former senator Ferdinand “Bongbong” Marcos Jr.

Moreno said he admires the vision of the dictator Marcos, but also condemned human rights abuses under Martial Law.

But for Robredo, the Marcoses and the atrocities committed by the family during the patriarch’s 21-year rule is a “nonnegotiable” for her. It was one of the reasons why her unity talks with Moreno fell through.

Robredo, however, said engaging with Moreno would ultimately not help achieve her goal in running for 2022: to prevent a Marcos presidency and to stop President Rodrigo Duterte’s extended hold on power.

(As I said before, I approached so many people, not just Mayor Isko, to find avenues to unite. Like what Senator Kiko Pangilinan said, this will not help and it’s clear who is our true enemy here.)

Robredo’s running mate Pangilinan reiterated people should focus more on the issues of the coronavirus instead of political colors in 2022.

(The biggest enemy of our generation, of our entire country, is COVID-19. Unless we address COVID-19, nothing will happen to us. Hunger, poverty, death – these things should be our focus… Our true enemy here is not the color, not Mayor Isko. Our true enemy is COVID-19.)

Her political strategy appears to have worked, with her senatorial slate composed of politicians who never would have banded together in the past. – Rappler.com