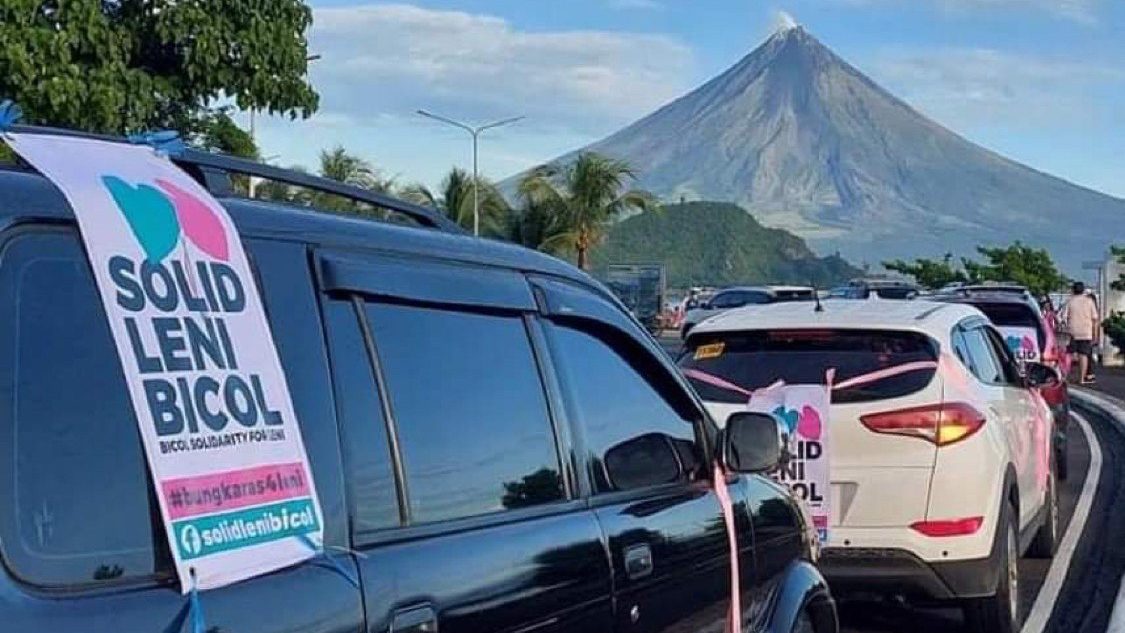 LEGAZPI CITY, Philippines – Saying they want to thwart forces seeking to break regional unity behind Vice President Leni Robredo, Albay supporters of the presidential candidate will hold a “massive rally” here on Saturday, April 9, to launch a series of activities in Bicol aimed at delivering a 90% Bicolano vote for Robredo.

At a press conference on Wednesday, April 6, Solid Leni Bicol regional campaign manager Ronald “Bong”  Rodriguez, said the April 9 rally at Sawangan Park, called “One Pink Crusade,”  is the first salvo in a series of marches and rallies across the region for Robredo, her running mate Senator Kiko Pangilinan, and their Senate slate.

“It’s time for us to support Leni as our own,” Rodriguez stressed, noting that Bicolanos will be holding their own campaign-relalted to compliment the campaign of the Vice President in other areas of the country.

Solid Leni Bicol is expecting “hundreds of thousands of Albayanos” to attend the caravan and march for the Bicolana candidate. Rodriguez urged volunteers to bring food, water, and other provisions to share with other attendees.

It makes sense for Albay to mount the opening salvo of Robredo’s last push. It was here where rival political kingpins showed up on February 9, the eve of the national campaign period, to show their support for the Vice President.

The April 9 event will start with a mass at the Joroan parish, which hosts the 200-year-old miraculous image and Diocesan Shrine of Our Lady of Salvation, the patroness of Albay.

A caravan will then depart the parish, joined by other Tiwi residents and others from areas the province’s 1st District.

The image of Ina or Mary the Mother of Christ, will lead the caravan, said Rodriguez.

Robredo supporters from the 3rd District – which includes Ligao City and Guinobatan, Jovellar, Libon, Oas, Pio Duran and Polangui towns – will meet up with the caravan as it heads to Legazpi.

In this city, the march will start from the St. Gregory the Great Cathedral and head in the direction of Sawangan Park.

Around 3 pm, a flotilla of boats flying pink flags will depart from the Albay Yacht Club and circle the waters off this city, with Mayon Volcano as the backdrop.

After Albay, Masbate will have its own activity on April 12, followed by Catanduanes on April 13, and Camarines Norte on April 17.

On May 1, there will be a One Pink festival in Sorsogon City.

The regional events will culminate in an anticipated mammoth event on May 6 in Naga City, Robredo’s hometown in Camarines Sur. The Vice President will be in Naga for the event.

While most candidates build up to a grand finale before election day, usually in their home provinces, Rodriguez said the activities in Bicol are also meant to thwart those who want to weaken regional unity behind Robredo.

At the same time, organizers also want to focus on basic sectors – workers, fisherfolks, and farmers who have not been seen as much in Robredo’s urban rallies.

“This will also be a show of force, a signal to those who intend to do bad things in the coming elections: These are the people you will face,” Rodriguez said in a mix of Filipino and English.

Lawyer Taikee Calleja, campaign manager for Solid Leni Albay, referenced surveys that show Robredo lagging behind Ferdinand Marcos Jr., the son of the dictator who ruled the country for over two decades. While Robredo’s voter preference rating jumped by 9 percentage points to 24% in the March survey of Pulse Asia Research, Incorporated, this is still far behind Ferdinand Marcos Jr.’s 56%.

“We will not be discouraged,” Calleja said, adding that volunteers have already fanned out to conduct house to house campaigns in various towns and cities.

“We don’t have money, so the fact that so many are joining us is a big inspiration,” he pointed out.

Rodriguez said the enthusiastic participation of “Kakampinks” in activities may inspire fire the undecided to join them.

“If they see the energy of those who are with the One Pink Crusade, that could inspire them. They may start asking themselves, ‘Bakit di ako sumasama (Why am I not joining them)?”

“And maybe in the remaining days, they will think about what they can do,” he added. “This is what we want to achieve by doing the series of people’s marches.” – Rappler.com