MANILA, Philippines – A group of private-individual supporters of presidential candidate Vice President Leni Robredo questioned at the Supreme Court (SC) the constitutionality of the Commission on Elections’ (Comelec) taking down of campaign materials on their private properties, or “Oplan Baklas.”

In a 52-page petition for certiorari, prohibition, and mandamus filed with prayer for temporary restraining order on Tuesday, March 1, the private individuals questioned the Comelec’s interpretation of the provisions in its campaign rules governing common poster areas, headquarter signboards, and the removal of prohibited materials – namely sections 21, 24, and 26 of Comelec Resolution 10730.

“The petitioners asked the Supreme Court to order the Comelec to cease and desist from applying these provisions to petitioners and all other private citizens, and to return and/or restore all tarpaulins, posters, billboard, murals, and other election materials dismantled, removed, defaced and/or confiscated pursuant to Oplan Baklas,” the petitioners said in a statement.

They also asked for the immediate conduct of a special raffle “with extreme urgency and without delay.”

The writs of certiorari and prohibition would annul or modify Comelec’s actions, as well as command the Comelec to desist from taking down campaign materials without or in excess of its jurisdiction.

Meanwhile, the writ of mandamus would command the Comelec to do something it had the legal duty to do, but neglected doing it.

Ahead of Tuesday’s development, the Comelec stood by its “Oplan Baklas” activities.

“Until we are restrained officially by the court, these operations will continue. If there’s a scheduled ‘Oplan Baklas’ week, that will continue,” spokesman James Jimenez said on Monday, February 28.

The petitioners asserted that Comelec Resolution 10730 applied only to candidates and political parties, and not private individuals.

They cited the case of Diocese of Bacolod vs. Comelec during the 2013 election season.

This case involved the right of the Diocese of Bacolod to display on its own compound two tarpaulins advertising the Catholic church’s stand against the reproductive health law, and listing candidates in the 2013 midterm elections who were either for or against the statute. (READ: [OPINION] Diocese of Bacolod v. Comelec: Giant tarps, free speech, and democratic disruption)

The SC in 2015 ruled it unconstitutional for the Comelec to remove the cathedral’s posters, saying the poll body had “no power to regulate the free expression of private citizens, who are neither candidates nor members of political parties.”

The Comelec, in its appreciation of election jurisprudence, has said the SC decision for the Diocese of Bacolod case only allows oversized posters if it pushes for an advocacy of a social cause. Lawyers of the Robredo supporters also argued that their posting of election materials on their private property is an act of ownership. “Any restriction on the right to one’s property must be reasonable and there should be a law supporting it.”

All these grounds, the petitioners say, affirm that Comelec has “no basis in law” to regulate private individuals’ political expressions.

“To allow Comelec to continue in taking down their tarpaulins, posters, and other election materials would contravene the previous decision of the Supreme Court, and more importantly, the fundamental freedoms of speech, expression, and due process of law, which the Supreme Court upheld in the cited case,” the petitioners said.

They also clarified that, while the petitioners are supporters of Robredo, they are also filing their case with reference to the rights of other Filipinos, regardless of who they support in the elections. 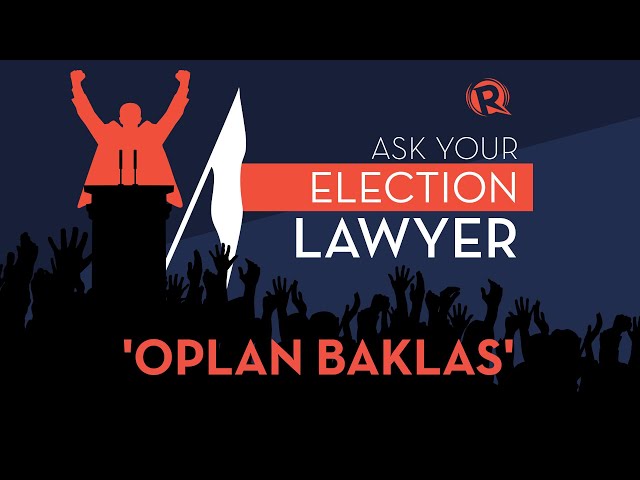 Campaign materials of the Robredo-Pangilinan tandem were among the first poster takedowns reported when the Comelec began conducting “Oplan Baklas” in mid-February. Robredo’s spokesperson Barry Gutierrez told the poll body that posters and tarpaulins put up by Filipinos within their private property were protected under the constitutionally given right of free speech.

After huge backlash online, the Comelec amended its policy on February 24 for “Oplan Baklas” to require written consent first from the private property owner before taking down the paraphernalia.