TAPPING THE CHURCH'S POWER. Presidential candidate and Vice President Leni Robredo speaks to her supporters coming from lay organizations and the religious community at the Cathedral-Shrine and Parish of the Good Shepherd in Novaliches, Quezon City, on March 1, 2022.

Facebook Twitter Copy URL
Copied
Presidential candidate and Vice President Leni Robredo is allowed to speak from within the Novaliches Cathedral, a rare occurrence in the Catholic Church

MANILA, Philippines – An image of the crucified Jesus Christ, with blood spilling from the nails driven through his wrists and the crown of thorns on his forehead, looked down at the crowd gathered inside the Cathedral of the Good Shepherd in Novaliches, Quezon City.

But there was no Mass inside the cathedral on Tuesday morning, March 1. Instead of clutching rosaries and missalettes, the people seated in the pews were flashing the “Laban” sign in the air. Instead of singing religious hymns, they were chanting, “Leni! Leni! Leni!”

One elderly woman tied a pink ribbon around her forehead, the words “Leni R. is my president” written over in black ink. Tears streamed down her face as she saw Vice President Leni Robredo enter the cathedral from the side of the altar. 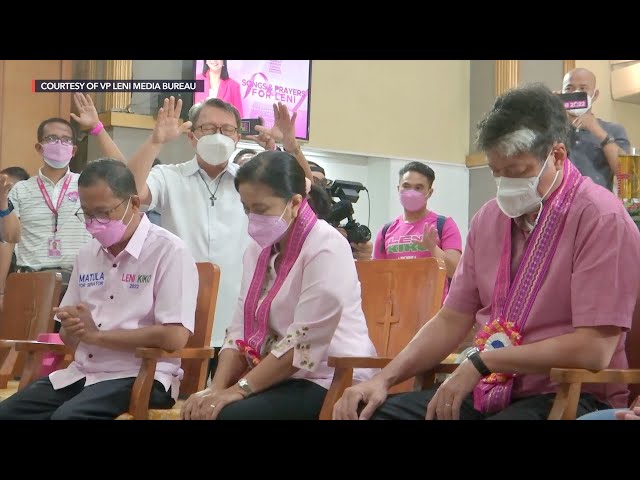 Robredo was flanked by her running mate Senator Kiko Pangilinan and Father Antonio Labiao, Vicar General for Pastoral Affairs at the Diocese of Novaliches.

Waiting for them in front of the altar was Novaliches Bishop Roberto Gaa, whose seat of power stood right underneath the image of Jesus Christ on the cross. Pope Francis named Gaa as bishop only in 2019.

In a podium placed directly in front the altar, Robredo was given a chance to address the faithful eager for the clean and decent government she promises to lead if she wins the presidency.

She also met with religious leaders from across Metro Manila who are now supporting her bid for the presidency, in a meeting held also within the cathedral grounds. Present during this meeting was Gaa’s predecessor, Novaliches Bishop Emeritus Antonio Tobias, a vocal critic of Duterte and the Marcoses.

Robredo’s prayer? Help her fight the lies plaguing this elections.

She said disinformation and propaganda were no match against the might of the Catholic Church.

(Some people think that when our volunteers do it, it’s still fake news. But when it comes from the Church, the influence that you yield on the flock is a gamechanger.) 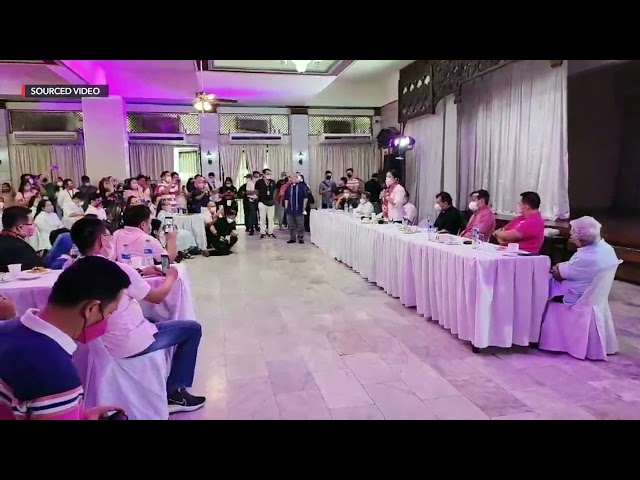 It’s rare for a politician, especially for a candidate gunning for the highest post in the land, to be allowed to speak within the hallowed halls of a cathedral.  Even more so when the political speech was delivered in the presence of not just one, but two bishops. Each bishop on his own represents the Catholic Church.

But more and more Filipino Catholic priests, deacons, brothers, and religious sisters have been coming out to voice support for Robredo in the high-stakes 2022 presidential polls.

They are breaking a long-held tradition that discouraged Catholic leaders from supporting specific candidates.

Lingayen-Dagupan Archbishop Socrates Villegas, however, put it best: “The Church should always be nonpartisan, but the Church cannot be neutral when we’re already talking about good or evil… The Church is biased in favor of righteousness, goodness, holiness.”

Of widows, the Church, and the Marcoses

The lone female presidential candidate is the top target of disinformation networks, which in turn benefits the current frontrunner, the late dictator’s son and namesake Ferdinand Marcos Jr.

The Marcos machinery has been accused of spreading lies and revising history, in particular glossing over the crimes committed under the dictatorship of Ferdinand Marcos.

The Marcos patriarch was eventually deposed in 1986, in a bloodless revolution that saw the Church led by Jaime Cardinal Sin mobilizing its flock against the dictatorial regime. The dictator was replaced by democracy icon Corazon Aquino, widow of the assassinated Martial Law dissenter Ninoy Aquino.

Thirty-six years later, another female opposition leader is counting on the Church to beat another Ferdinand Marcos.

Robredo is also a widow. She was a low-key political wife eventually thrust into the national spotlight when her husband, longtime Naga City mayor turned Department of the Interior and Local Government (DILG) chief Jesse Robredo, died in a plane crash in 2012. The Diocese of Novaliches also has a history of a fruitful working relationship with the Robredos, specifically Leni’s late husband Jesse. He was a Marian devotee from Bicol, just like Leni.

The late investigative journalist Aries Rufo wrote in his book Altar of Secrets that in 2011, then-DILG secretary Jesse had written to bishops asking for a Church-government partnership to bring about change at the barangay level.

Only Bishop Tobias of Novaliches responded to Jesse.

This gave birth to UBAS or the “Ugnayan ng Barangay at Simbahan,” a widely acclaimed grassroots project that Leni championed when she became vice president years after Jesse died.

Leni paid homage to UBAS in her speech inside the Novaliches Cathedral as she explained how ordinary folk would be given a seat at the table if she becomes the next Philippine president.

“When we talk about having a stake in governance, the only way for people to be empowered is to go give them the mechanism and the platform to directly participate in governance,” she said

Robredo is running an uphill battle for Malacañang against front runner Marcos and eight other male candidates. She remains a far second placer to Marcos in major pre-election polls, with her numbers even dipping by four points in the latest Pulse Asia Research survey. – with reports from Paterno Esmaquel/Rappler.com