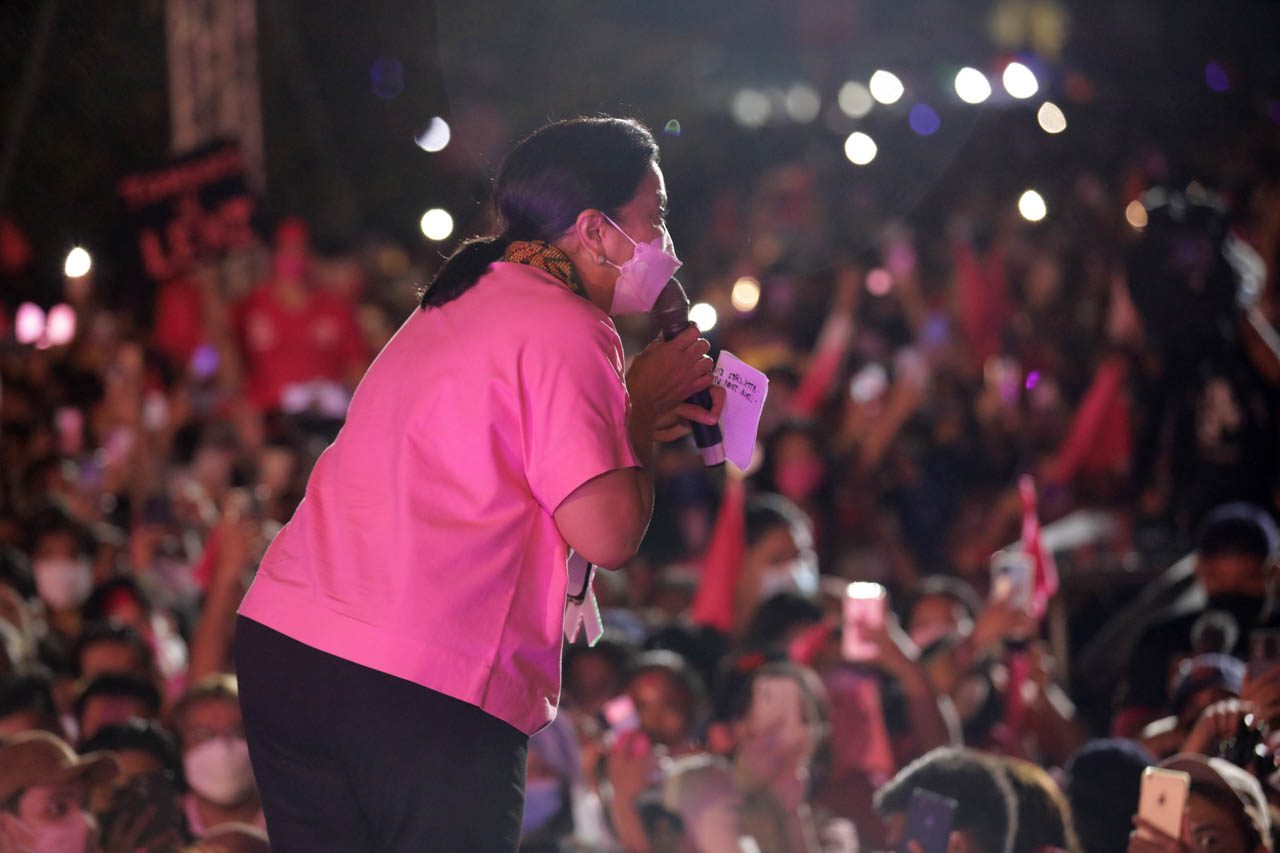 The rains did not deter thousands of supporters of presidential aspirant Vice President Leni Robredo from holding the multi-sectoral people’s assembly at the GenSan Oval Plaza in General Santos City on Tuesday, March 15. They were excited to see Robredo and made sure they showed their love for their presidential bet. The event ended with a grand fireworks display. (VP Leni Media Bureau)

Facebook Twitter Copy URL
Copied
The Grand People’s Rally for the tandem and their ticket will be held at the Cesar C. Climaco Freedom Park where the assassinated mayor's remains are, and where a Freedom Wall was erected in honor of Ninoy Aquino

ZAMBOANGA CITY, Philippines – A shrine built on Abong-Abong Hill in Pasonanca serves as a marker of the grave of slain Zamboanga mayor Cesar Climaco.

Several meters away is the Freedom Wall with a mural Climaco commissioned in honor of his friend, the late senator Benigno “Ninoy” Aquino Jr.

The well-preserved mural shows an image of Ninoy Aquino. Part of what is written on top of it said: “Senator Benigno Aquino, upon his return to his motherland, was assassinated at the tarmac of Manila International Airport under the command of President Ferdinand Edralin Marcos….”

Organizers of the Zamboanga City rally of presidential candidate Vice President Leni Robredo and running mate Senator Kiko Pangilinan said they would remind residents of what it was like in the city during the Martial Law years and the Marcos dictatorship, as a whole.

The so-called Zamboanga Grand People’s Rally on Thursday, March 17, will be held at the Cesar C. Climaco Freedom Park where the murdered mayor’s remains are, and where he had erected the Freedom Wall in honor of Aquino shortly after the former senator’s assassination in 1983.

In November 1984, shortly after he built the wall, Climaco, one of Mindanao’s fiercest voices against the Marcos dictatorship, was shot dead at close range by a still unidentified gunman. He was 68.

The name of Climaco, remembered for growing his grey hair long as a political statement against the Marcos dictatorship, is included in the first batch of honorees immortalized in the Wall of Remembrance at the Bantayog ng mga Bayani.

Campaign volunteers said they chose Climaco Park, located in a valley and some seven kilometers from downtown Zamboanga, not just because they were expecting a huge crowd but because of its significance to Zamboangueños.

“The choice of venue is not because of its capacity, but because of its symbolic representation that connects to two statesmen whose lives were ended with gunshots during the Marcos dictatorship,” said Anton Mari Lim, the leader of the Robredo-Pangilinan rally organizers in Zamboanga.

Organizers said they expect the event, dubbed as “Layag, Leni, Layag, Kiko” (Sail on, Leni; Sail on, Kiko) to gather supporters of the candidates from all over Zamboanga Peninsula, and the provinces of Basilan, Sulu, and Tawi-Tawi.

Lim said they would set up a Martial Law exhibit – to remind people about the impact of the Marcos dictatorship on Mindanao and the entire country – near the shrine, and the wall that was built by the late mayor.

Lim said members of the faculty and students of the Jesuit-run Ateneo de Zamboanga University (ADMU) were actively involved in organizing the rally and community-level campaign efforts for the Robredo-Pangilinan ticket.

Chester Tolentino, who serves as the rally coordinator, said it would be a tall order for them to beat the record of their counterparts in Bacolod that saw a crowd of 70,000 during the Robredo-Pangilinan rally there last week.

Tolentino, however, said they were preparing for a huge campaign rally, if not, the biggest political gathering in Zamboanga in recent years given the fervor of the group’s volunteers and supporters in the city and region.

A group of more than 50 physicians and health workers volunteered to man a station at the rally site and respond to cases that require medical assistance.

Tolentino said several groups in Zamboanga and elsewhere, including the physicians, also volunteered to perform during the rally. – Rappler.com