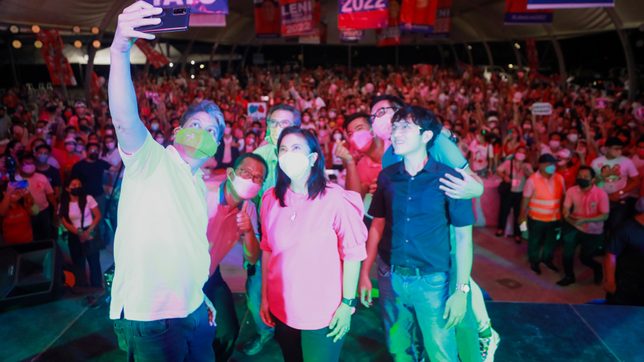 Referring to the Ferrers, Robredo said: “‘Yung akin pong relasyon sa kanila ay talagang kaibigan.” (My relationship with them is that of true friends.) Robredo recalled going to San Francisco in the United States with congressman Ferrer, Cavite 3rd District Congressman and Imus City mayoral aspirant Alex Advincula, and Cavite 1st District congressman Francis Gerald Abaya. She shared that she was often not accompanied by security so the three congressmen went with her during their trip abroad.

Abaya, in September, voiced his support for Sara Duterte if the Davao City mayor decided to run for president. Duterte has since filed her certificate of candidacy for vice president, with the son of the deposed dictator, Ferdinand “Bongbong” Marcos Jr., as her standard-bearer.

Advincula met with Robredo and Bishop Rey Evangelista at the Imus Cathedral, where the Vice President led a ribbon-cutting ceremony for a bell house.

Advincula was also present at the Dasmariñas National High School, where Robredo spoke with supporters and answered questions from representatives of fisherfolk, healthcare workers, and jeepney drivers.

Cavite 4th District Representative Elpidio Barzaga was in the audience, but it was his son, Dasmariñas City Councilor Francisco Barzaga, who welcomed Robredo.

The two food trucks came from anonymous donors and were repainted by volunteers.

[WATCH] On The Campaign Trail with John Nery: Has the Leni campaign become a movement? Cavite is the province with the second highest number of registered voters. In 2016, when Robredo ran for vice president, she lost in Cavite to Ferdinand Marcos Jr. by more than 150,000 votes. Robredo garnered 404,105 votes in the province against Marcos’ 556,622. – with Dennis Abrina and Rappler Research/Rappler.com

*An earlier version of this report identified Roy Loyola as the congressman of the 5th District of Cavite, a post he previously held. It has been corrected to reflect his current post as Carmona mayor.