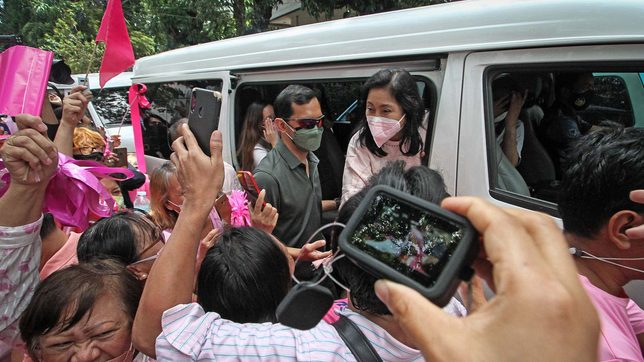 Presidential aspirant Leni Robredo is welcomed by supporters during a courtesy call with Cebu Archbishop Jose Palma in Cebu City.

Facebook Twitter Copy URL
Copied
On her first visit as a presidential aspirant, Robredo tells Cebuanos, who chose her as vice president in 2016, ‘I’m not entitled to anything’

On her first trip as presidential aspirant to vote-rich Cebu province, Vice President Leni Robredo said that while she is aware that she placed first here in the 2016 elections, she is not taking anything for granted.

“I still have to work hard to get the trust and support given to me in 2016. And of course, the entire ticket,” Robredo told reporters in a mix of Filipino and English at her Cebu campaign headquarters on Friday afternoon, November 12.

Robredo was greeted by supporters who waited her arrival wearing the pink campaign colors along the route to her morning events.

Despite being the frequent target of disinformation and political propaganda, Robredo said that the support she felt here today was even greater than in 2016.

“From the time we got out of the plane this morning, I didn’t even experience this before,” Robredo said. “The reception is very far from the one in 2016. So, we are really overwhelmed,” she added.

The irony is that while Cebuanos chose Robredo, they also voted overwhelmingly for President Rodrigo Duterte, who got 1.2 million votes in this province over former Interior Secretary Mar Roxas’ 600,000 votes.

As of September 2021, Cebu is the most vote-rich province in the country with over 3.2 million voters. The province also has consistently high turnouts in the polls every election.

While Robredo said the support was “overwhelming,” she knows the upcoming presidential election will be more difficult.

“ [The] 2016 campaign is so much different than the one we’re having now,” the vice president said.

“But for me, it’s different in the sense that it was much more conventional. Meaning to say, because we were the candidates, we were the ones in charge of organizing, printing materials, scheduling events, now it’s the reverse,” she added.

She pointed out that this election cycle, the campaign was more grassroots with volunteers forming their own groups, printing materials, and holding their own campaign efforts for Robredo.

“So even if it’s different in the sense that we’re not in the admin anymore, we don’t have the machinery, pero the passion of the volunteers more than make up for what we don’t have now,” Robredo said.

In the 2016, 90% of Cebu’s local chief executives spread across the 44 municipalities and six cities belonged to the then-ruling Liberal Party.

But now most local chiefs belong to the ruling PDP-Laban party and support the administration of Duterte.

So far, only reelectionist Vice Governor Hilario Davide III has come out in support of Robredo.

Former Cebu City Mayor Tomas Osmeña supported Robredo in 2016, but he has not yet come out with an official endorsement of a presidential candidate.

On Robredo’s first day on her Cebu visit, she paid a courtesy call on Cebu Archbishop Jose Palma, met with grassroots organizations, and attended the turnover of individual sustainable livelihood and training subsidies to low-income residents in Cebu City.

On Saturday, she is scheduled to meet with her supporters including Lawyers 4 Leni – Cebu, Cebuano Volunteers for Leni-Kiko, and Bayanihan Sugboanon Volunteers.

She’ll then visit the Sugboanon for Leni-Kiko 2022 headquarters in the afternoon before heading back to Manila. – Rappler.com