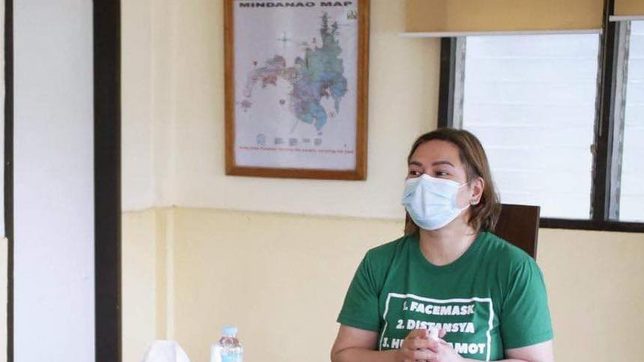 Davao City Mayor and vice presidential aspirant Sara Duterte said running for the position was an opportunity to meet her supporters halfway.

Speaking to a pro-Duterte radio host early on November 14, President Rodrigo Duterte said he couldn’t understand why Sara, who had led early presidential preference surveys, would seek the vice presidency instead. The President said it’s why he convinced his longtime aide, Go, to run for president.

Sara, in a statement on November 14,, said she had decided to not run for president but was met with the “relentless call” for her to run in 2022.

“I have thousands of supporters who cried last October 8. And I cannot find it in my heart to make them cry again on November 15. After the deadline, the offer to run for vice president became an opportunity to meet you halfway,” she said.

Earlier, the older Duterte claimed his daughter’s decision to run for vice president was the doing of the camp of erstwhile ally Bongbong Marcos Jr., a presidential candidate under the Partido Federal ng Pilipinas.

Sara’s decision to run for the second-highest post in the land comes after months of clamor – from supporters, political allies, and even her own father – for her to run for president.

Hours after Sara filed via her representatives, President Duterte, Senator Go, and a posse of their supporters went to the Commission on Elections (Comelec) office so that Go could withdraw his candidacy as the ruling Cusi-led PDP-Laban faction’s vice presidential candidate and substitute as the presidential bet for Pederalismo ng Dugong Dakilang Samahan (PDDS).

What is PDDS, the party backing Bong Go’s presidential bid? Communications Secretary Martin Andanar also said Rodrigo Duterte will be Go’s running mate, and that he’ll be filing his candidacy on November 15, the last day for substitution via withdrawal. That means father and daughter might turn rivals in the vice presidential race.

‘The problems of PDP are their own’

Sara Duterte also dismissed the chaos at the Comelec headquarters, on social media, and in political circles as mere “politics [that] will not matter in the years to come.”

“I appeal to all supporters to stay calm. The problems of [PDP-Laban] are their own,” she said in her recorded statement posted on social media.

Sara said talk and speculation was “all politics” that “will not matter in the years to come and even now, when we need to focus on this country’s recovery and the people’s welfare.”

“Let us be circumspect and stay the course. Focus on forging relationships to unite for the good of our country,” she added.

Duterte vs Duterte, PDP-Laban vs PDP-Laban

Hinting at a long political career ahead, Sara added: “It’s a path that would allow me to heed your call to serve our country and make me a stronger person and public servant in the years that lie ahead.”

Sara had said in the past that she wanted to finish three consecutive terms as city mayor. But even as she remained vague about her desire to seek a national post then, the Davao mayor made it clear that she had no intention of joining PDP-Laban or of being its standard-bearer.

PDP-Laban is the party the older Duterte ran under in 2016. While it’s the ruling party, it’s also marred by infighting.

President Duterte chairs the Cusi-led faction while another erstwhile ally and presidential candidate Senator Manny Pacquiao, heads another faction alongside Senator Koko Pimentel, the son of one of the party’s original founders. The Cusi faction earlier asked Comelec to declare the Pacquiao and Pimentel faction as illegitimate. The case has yet to be resolved, prompting Pacquiao to file his candidacy under a relatively obscure Cebu-based party, PROMDI.

While the Cusi faction criticized this move by Pacquiao, they seem to be employing the same in Go’s candidacy. He is running under PDDS also because of the pending Comelec case.

Sara officially joined Lakas-CMD on November 11, through an oath administered by party president Majority Leader Martin Romualdez, who is Marcos’ first cousin. Lakas-CMD is a party that counts as one of its stalwarts the former president and House Speaker Gloria Macapagal-Arroyo, whom allies have referred to as a Sara’s mentor of sorts. – Rappler.com