DELOS REYES. Security guard Phil delos Reyes files his certificate of candidacy for senator at the Harbour Garden Tent of the Sofitel Hotel in Pasay City on October 1, 2021.

Among the people filing their certificates of candidacy (COC) for national positions on Friday, October 1, was Phil delos Reyes, a security guard who intends to seek a Senate seat.

Delos Reyes arrived at Sofitel Manila’s tent in his uniform and took to the stage to speak to members of the media about his platform for the coming election, which included plans to continue President Rodrigo Duterte’s work against drugs, poverty, the New People’s Army, corruption, and criminality.

(I’m before you today to let you know that I am running for senator. A senator who will find solutions to all of the country’s problems and create laws for them, and these will be processed immediately for the president to have them implemented for the benefit of all and for each Filipino.) 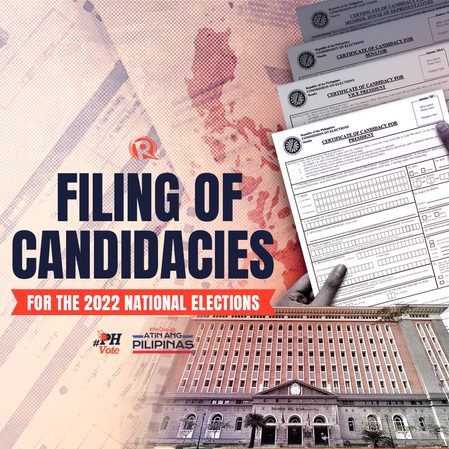 He also said he wants to focus on improving the quality of life of Filipinos through, among other things, better reintegration programs for persons deprived of liberty, universal housing, education for impoverished children, discounts on electricity, water, and internet services, and raising walls near rivers to prevent floods.

Delos Reyes, who spoke after a vice presidential aspirant who spewed vaccine misinformation, surprised the media and those who were watching the COC filing livestream.

Netizens expressed their surprise online over Delos Reyes as well. “Mas may alam pa siya sa mga pangkaraniwang problema na danas ng mamamayang Pilipino kumpara sa ibang politiko diyan and what do we see sa replies about him? Trash,” said a Twitter user. (He knows more about the everyday problems that Filipinos experience than other politicians, but what do we see in replies about him? Trash.)

Others offered to raise funds for him and asked the Commission on Elections not to dismiss him as a nuisance candidate.

Other netizens compared him to public officials currently in office, while those who commented on Rappler’s Facebook post about him expressed their support for him.

Seventy-seven national positions will be up for grabs in the 2022 Philippine elections, which will take place on May 9, 2022. COC filing will take place from October 1 to October 8 from 8 am to 5pm, including weekends. – Rappler.com