SOFTWARE PROVIDER. Technology company Smartmatic will supply the Commission on Elections with the software technology for the 2022 national polls.

Facebook Twitter Copy URL
Copied
This comes despite calls of groups and personalities, including President Rodrigo Duterte himself, to replace Smartmatic due to allegations of election fraud 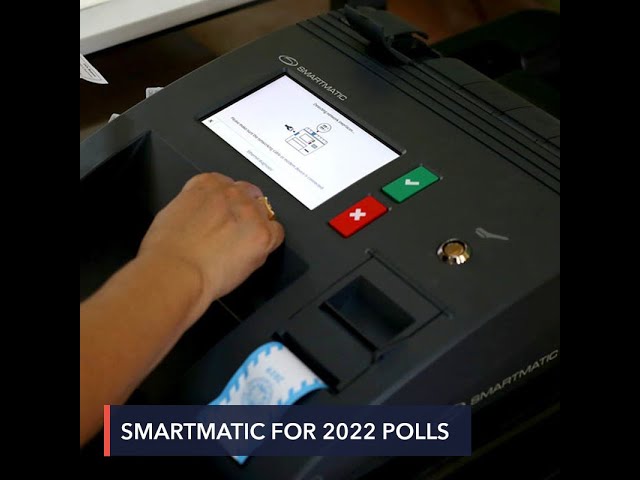 The Commission on Elections (Comelec) awarded multinational corporation Smartmatic a P402-million ($8.4-million) contract to provide software for the automated election system in the 2022 presidential polls.

The two parties signed the deal on May 4 and published it on the poll body’s website on May 10.

This comes despite calls of groups and personalities, including President Rodrigo Duterte himself, to replace Smartmatic due to allegations of election fraud.

The Comelec is now dominated by Duterte appointees, and has used Smartmatic technology in all of the Philippines’ four previous automated elections, including the one that Duterte won in 2016.

Based on the Comelec’s notice of award to Smartmatic dated March 30, the poll body awarded it “the Contract for the Procurement of Automated Elections System (AES) Software for the Election Management System (EMS), Vote Counting Machines (VCMs), and Consolidation & Canvassing System (CCS) to be used in the 2022 National and Local Elections.”

The AES is “a system using appropriate technology which has been demonstrated in the voting, counting, consolidating, canvassing, and transmission of election results, and other electoral processes,” according to the contract.

The EMS meanwhile prepares the template of the ballots, as well as the “programs for use in the casting and counting of votes and to consolidate, report and display election results in the shortest time possible.”

The VCMs are the physical equipment, and the CCS, as its name suggests, canvasses the votes.

As Comelec’s partner, Smartmatic’s tasks include ensuring a fully operational integrated system and creating a contingency plan for the AES, “in case of system breakdown or any such eventuality which shall result in the delay, obstruction, or non-performance of the election process.”

Rappler has reached out to the Comelec to verify whether a separate contract is needed for Smartmatic to be the Philippines’ VCM provider for the 2022 polls, but has yet to receive a response.

There are around 97,000 VCMs in the possession of Comelec, according to Commissioner Antonio Kho Jr. in an online briefing on Monday, May 10. These machines will be subjected to refurbishment.

“Our 97,000 VCMs, we don’t expect them all to be okay. We’re looking at the possibility of acquiring additional machines, around 10,000 units,” he said.

Smartmatic has provided Comelec with poll machines and the technology since the 2010 national elections. It is 100% privately owned and has no ties to political parties or groups, according to its website.

Following the conduct of the 2019 midterm elections, President Rodrigo Duterte said the Comelec should junk the VCMs of Smartmatic and “look for a new one that is free of fraud.”

The chief executive’s criticism came after reports of machines that rejected ballots, transmission delays, and over-voting marred the conduct of the 2019 elections.

In the most high-profile election protest of recent years, former senator Ferdinand Marcos Jr accused Vice President Leni Robredo of conspiring with the Comelec and Smartmatic to rig the 2016 polls. The Supreme Court eventually junked Marcos’ protest against Robredo. – Rappler.com