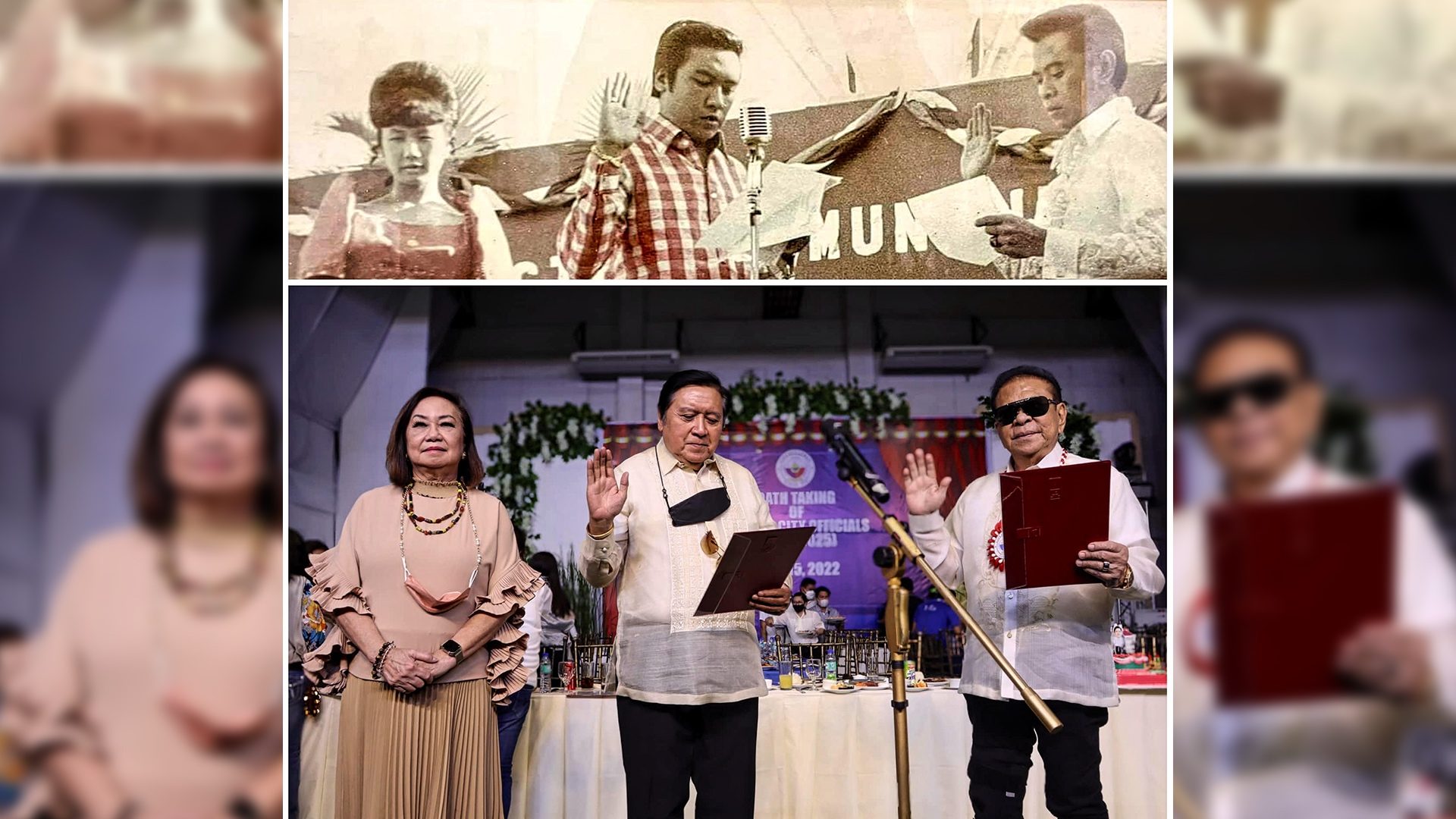 THEN AND NOW. Fifty years ago, then Candon Mayor Eric D. Singson with wife Grace Gacula Singson took his oath in front of then Ilocos Sur Gov. Luis “Chavit” Singson on January 1, 1971. Within that span, the two would become the two political kingpins of the province. On June 15, 2022 during Eric’s birthday, the same scenario would be repeated with Eric, taking his oath as Candon mayor in front of Singson.

BAGUIO CITY, Philippines – During the Martial Law years under the President Ferdinand E. Marcos, not much was done to provoke the Solid North.

One, there were no honest-to-goodness elections to awaken Ilocano pride. Second, it was very hard to manipulate the Ilocano people when the military and Marcos’ iron gloves controlled the countryside.

“There is a notion that Ilocos and the rest of the regions were treated more ‘fairly and humanely,’ hence their continuing support,” said University of the Philippines Los Baños sociology professor Reidan Pawilen.

“This has not always been the case,” he wrote in “The Solid North Myth: An investigation on the status of dissent and human rights during the Marcos Regime in Regions 1 and 2, 1969-1986.”

Pawilen and Berniemack Arellano came out with an atrocity map of the Solid North during Martial Law.

They used the database of the  Human Rights Violations Victims’ Memorial Commission that listed various abuses, ranging from involuntary exile to enforced disappearances or killing, through a 10-point system in the Motu Propio Roll of Victims.

“Based on the data provided, it is shown that even Northern Luzon was not spared [from] these atrocities, thus questioning the notion of a ‘one united solid North’ narrative,” Arellano said.

The two created a map in Filipino and Ilocano, noting that “the map shows that most of the ‘10 points’ human rights abuses occurred in Cagayan Province, with 76 confirmed individuals either missing or killed, followed by Isabela with 50. Ilocos Norte had 22 victims, not yet counting various degrees of abuses like involuntary exile or torture.”

Now 98 years old, he will be the oldest Filipino to serve in Cabinet, having been appointed by president-elect Ferdinand Marcos Jr., the dictator’s son, as chief presidential legal counsel. 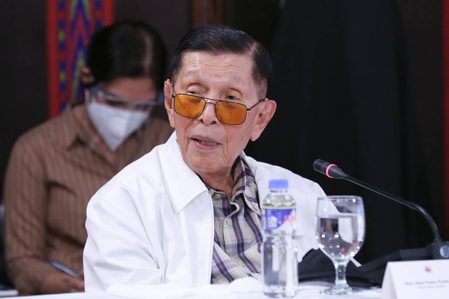 The start of Marcos’ fall

In hindsight, the start of the fall of the late president Marcos came on August 21, 1983, when opposition leader Benigno “Ninoy” Aquino Jr. was murdered moments after his plane landed at the Manila International Airport.

Only 50 years old at that time, Ninoy was the bright star of the opposition, holding new records as the youngest governor and senator.

In exile in Boston, Aquino knew that Marcos was gravely ill. Despite the risks, he sought to return to revive the opposition.

His wake and burial were attended by a multitude. The subsequent investigation into his murder, though inconclusive, convinced a lot of Filipinos about the culpability of the Marcos regime.

According to a 1988 paper by Luzviminda Tancangco and Roger Mendoza of the UP College of Public Administration, the Aquino assassination “marked a turning point in the two-decade rule of President Ferdinand E. Marcos as it ignited simultaneous and interlocking crises that engulfed an entire nation under a lingering authoritarianism.”

But other political scientists said the crisis started even before the Aquino assassination shook Marcos’ crumbling political base.

The financial crisis mentioned here was the effect of the extensive borrowing by the regime to finance its development programs and investment projects and the increasing plunder of the country’s wealth by the Marcos family and cronies.

“They decisively preceded the assassination and were by themselves sufficient to ensure the downfall of Marcos. The assassination focused attention on the pre-existing crises and precipitated broader involvement and more explicit political action. Most notably, it drove the business elite and the clergy to the streets,” Overholt said.

This was an umbrella coalition of mostly right-wing party factions. It killed the traditional two-party system in the Philippines and ushered in a tradition of new presidents consolidating power by making political butterflies of winning politicians.

The Aquino assassination created a political reawakening, which resulted in coalescing the traditional opposition political parties, like the United Nationalist Democratic Organization (Unido) and the Pilipino Democratic Party-Lakas ng Bayan, with nationalist and cause-oriented groups. These resulted in the so-called yellow confetti revolution and the parliament of the streets.

KBL at that time was also wracked with resignations from party members until Marcos had to rely on his Solid North again.

The May 1984 Batasang Pambansa elections was the test case. The KBL reportedly employed the “overkill strategy” to ensure a supermajority for the Marcoses.

“This enabled Marcos and the KBL to have complete control over the mass media, public programs, services and resources utilized for organizational and campaign purposes as well as in buying political leaders and voters,” Tangcangco and Mendoza wrote in “Elections and the Crisis of Legitimacy in the Philippines.”

Marcos also had control of the Commission on Elections (Comelec), the military, civil service, local governments, and the judiciary during the campaign.

During the elections, voter turnout was high at 89%.

The votes cast for the opposition and independents at 53.3% of the total votes were higher than those of KBL.

But the opposition was able to obtain only 40%  of the Batasan seats while KBL got 60% because of “tampering and manipulation of election results.”

On November 4, 1985, President Marcos surprisingly called for a special presidential election in February 1986.

Although this was widely seen as a way to acquiesce to pressure from the United States and foreign creditors for continued financial assistance, he was also confident that his control of the entire electoral machinery would buoy him to a new victory.

Still, observers saw this as his hardest political battle.

He chose veteran politician Arturo Tolentino as his running mate. Against them were Aquino’s widow Corazon and Salvador Laurel as her running mate.

Over 1,000 incidents of intimidation and violence were reported, mostly in the bailiwicks of the opposition, Tangcangco wrote.

“The use of the 1984 registration list that provided a built-in reserve of about two-million votes for the purposes of the 1986 elections attests to the well-conceived plan of manipulating election results on a wholesale basis during the canvassing stage,” Tancangco and Mendoza said.

“Padding of voters’ list was likewise highest in the Ilocos, Cagayan Valley, Eastern Visayas, and Mindanao regions, which were acknowledged Marcos’ domains.”

The authors also said the turnout of voters was particularly low in opposition bailiwicks, like Metro Manila, Southern Tagalog, Bicol, and Western Visayas, while those in KBL bailiwicks like the Solid North “point to an intricate vote addition-vote subtraction strategy designed to maximize Marcos’ lead in his traditional strongholds and minimize losses in opposition areas.”

Lest it be forgotten, Marcos won the lopsided contest, according to Comelec.

But the resulting whirlwind of events caused by disclosures of cheating and military defection ushered in the non-violent People Power Revolution from February 22 to 25, 1986, culminating in the ouster of the dictator and the apparent dissolution of the KBL and the Solid North.

The joke then was that Marcos agreed to ride the helicopter because he thought he was going to Paoay (where the so-called Malacañang of the North in Ilocos Norte was located), only to learn that he and his entourage were being brought to Hawaii.

In the aftermath of the EDSA People Power revolt, it was as if Paoay and the rest of the Solid North also went into exile with Marcos.

“After the EDSA Revolution, the president left and we who were left behind felt like orphans,” recalled Candon City Mayor Eric Singson, who won as congressman of the 2nd District of Ilocos Sur then.

He said that the late Jose “Sunshine Joe” Aspiras, who was the tourism minister under Marcos and also a member of the 1986 Batasan, gathered all the Solid North congressmen and pondered on their collective future.

It was at that time Aspiras organized them and formed the Northern Luzon Alliance (NLA).

“I think we were the only one of its kind at that time in the House. We united to pass certain bills, especially those related to the development of the North,” Singson said.

When Aspiras retired from politics and died, it was Luis “Chavit” Singson of the 1st District of Ilocos Sur who replaced him as NLA chair.

After one term, Eric Singson took over for several terms as NLA president, with representatives Victor Ortega of La Union and DV Savellano of Ilocos Sur replacing him.

Eric Singson said that the NLA tried not to rally for a single presidential candidate even if they have Ilocano blood.

When Fidel Ramos won in the 1992 presidential election, he did not take the Solid North even if his roots were in Pangasinan and Ilocos Sur, because others from the Solid North area also ran, like the late Eduardo Cojuangco Jr. and Imelda Marcos, widow of the dictator.

In the 1998 presidential election, the Solid North candidates were Juan Ponce Enrile (Cagayan) and Jose de Venecia (Pangasinan), but they won only in their bailiwicks.

President Joseph Estrada won in the other parts of the Solid North.

The 2004 elections was supposed to be the contest between two Solid North stalwarts, but President Gloria Macapagal Arroyo only won in most parts of the Cordillera and Pampanga, while actor Fernando Poe Jr. got the rest of Solid North and Luzon.

The 2010 elections was a contest between Estrada and eventual president Benigno Aquino III for the Solid North, with Estrada getting the northeastern part and Aquino the northwestern part of Central and Northern Luzon.

Singson said that, at the time, the Northern Luzon Alliance was becoming more blood-driven rather than geographical.

“There were some from Mindanao and other areas who approached me and told me that their father or mother is Ilocano coming from this town. There are also party-list members whose roots are from the North. We all accepted them,” he said.

The NLA also became more aggressive, he said. “We were recognized as a bloc in the House.”

When there was a plan to unseat President Arroyo, “the NLA was the first group to support her and the others followed,” he added.

“Soon, the other ethnic groups like the Visayans also grouped themselves,” Singson said.

“But when it comes to the reach and loyalty, the NLA is hard to beat,” he said. – Rappler.com

This series was made possible by Internews.