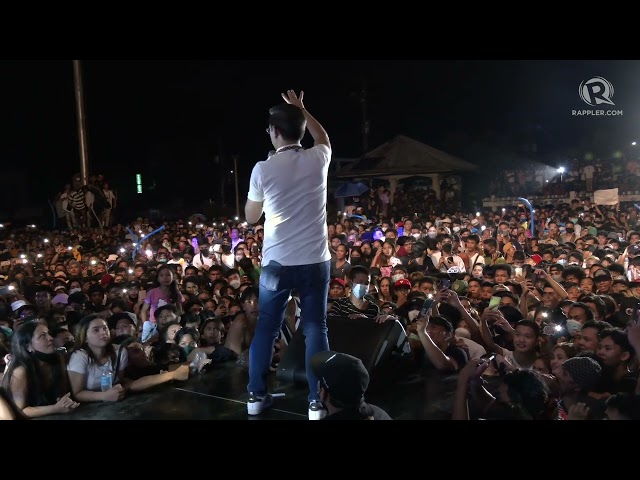 Despite light rain, the crowd stayed throughout local acts and speeches of Aksyon Demokratiko senatorial bets.

After a rousing performance by rapper Range 999 and Moreno’s actor son Joaquin Domagoso, many in the crowd turned on their cellular phones’ flashlights to welcome the Manila mayor onstage. Flashing the “two joints” hand sign and calling himself the candidate who is “not toxic” but “organic,” Moreno made his pitch to become the “color-blind” president who will end decades of political bickering by dominant political camps and families.

But the controversial joint press conference where he called on Vice President Leni Robredo to withdraw hung like rain clouds over this pitch. Robredo’s supporters, and even some of his own, questioned the wisdom of urging her to back out of the presidential race at a time when her voter-preference rating has surged, whereas his has remained stagnant – at least based on Pulse Asia’s March survey. (CAMPAIGN TRAIL: After ‘Leni, withdraw,’ Isko Moreno barnstorms Caraga)

Still, his Butuan City crowd sounded anti-Robredo, jeering when he mentioned “yellow-pink” during his speech. Watch Moreno’s speech in full, here on this page. Can the Manila mayor get lots of votes here, Caraga’s most vote-rich city where 226,000 votes are up for grabs? – Rappler.com