FROM FIST TO 'NUMBER ONE' SIGN. Manila Mayor and presidential candidate Isko Moreno attends a press conference where a major 2016 Duterte volunteer group pledges to support his presidential bid.

Facebook Twitter Copy URL
Copied
Isko Moreno is shaping up to be the continuity candidate no one expected. What led to this?

MANILA, Philippines – In a span of seven months, Isko Moreno has gone from taking swipes at the Duterte administration to traversing Mindanao aboard a truck bearing his and Sara Duterte’s face.

A young, fresh-faced presidential candidate whom opposition groups had been eyeing as a challenger to the administration is now presenting himself as the continuity candidate no one expected.

(DDS is Domagoso Die-hard Supporter. Is that okay?)

The road that led to this strategy was rough and twisted. Three factors paved the way:

Two people in Moreno’s camp, his chief of staff Let Zarcal and his campaign manager Lito Banayo, told Rappler that in the August and September “unity” talks led by Robredo, the Vice President appeared set on staying out of the presidential race.

Back then she was not rating well in surveys and had been mulling running for Camarines Sur governor instead.

“She sounded very sincere in eschewing a run for the presidency, hinting that she preferred to go local and stating that all she wanted was to unite towards a single candidate against [Marcos] Junior or the Duterte candidate,” Banayo told Rappler on February 11.

He also claimed that “sources” from the camp of Panfilo Lacson “felt she was not really intent on unity per se but unity behind her.”

Lacson tweeted in October: “Unification could have succeeded if it was the ultimate objective. It failed because it was a scheme.” (READ: Why Lacson almost walked out of meeting with Robredo)

Zarcal said he thinks Robredo’s unity talks back then were not sincere.

“Kahit ako, masama ang loob ko of the outcome because, right at the start, we thought there would be a united team. Right from the start, we were made to believe that she wasn’t really interested in running but she’s very interested in consolidating the forces,” he told Rappler last January.

(In the end, what they wanted was something else. It’s like someone courts you then it turns out, they’re courting someone else. That’s water under the bridge, we’ve moved on from that.)

Moreno was frustrated by Robredo’s eventual decision to run, thinking he had been taken for a ride. In Banayo’s words, the mayor felt he was someone whose “sincerity in dealing fair was toyed around by political elites.” (WATCH: Rappler Talk Newsmaker: Why did Isko slam Leni? His party chairman explains)

Robredo’s spokesman Barry Gutierrez has denied such claims, alleging in turn that Robredo was still undecided on her 2022 plans at the time of the talks.

Adding salt to the wound was the hashtag #WithdrawIsko that trended on Twitter the day after Robredo announced her presidential bid. Moreno believes the hashtag was initiated by Liberal Party personalities. A frustrated Moreno then used the word “yellowtard” in public, the first signal of the new direction his campaign strategy would take.

Robredo’s presidential run now ate up whatever support Moreno could count on from groups critical of President Duterte. Local politicians who had signaled their willingness to back the mayor switched to Robredo. 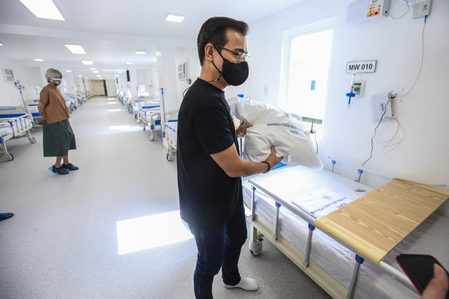 To be sure, Moreno did not start out seeking to become the opposition candidate. He was a Duterte appointee before he became Manila mayor and when, as local chief he was compared to Duterte, Moreno said he was “honored.”

Even before Robredo’s bid, he had begged off from the 1Sambayan nomination, knowing this was a sure-fire way of being identified with anti-Duterte forces. Instead, he sought to become the “middle ground” bet – someone who could “unite” as many parts of the political spectrum as possible.

But with the Vice President’s last-minute move, much of the opposition side of that spectrum would be counted on to back her and not him. He had to turn to other sources of support. Much could be had from the opposite of the spectrum – the pro-Duterte forces – if he played his cards right.

Moreno may also be banking on the big chance that, between him and Robredo, a Marcos supporter reconsidering their choice for whatever reason would be more likely to switch to him. A Marcos supporter would likely close the door on Robredo but might still be convinced to vote for Moreno.

The Marcos-Sara Duterte switch was another curveball for Moreno and his team.

Up until the October 2021 filing of candidacies, they had thought Sara would run for president with Marcos as her running mate. This expectation was partly why Moreno had no qualms admitting “admiration” for the late dictator Ferdinand Marcos. If Marcos Junior would just be running for VP, surely it wouldn’t hurt to get support from his bailiwicks?

Ironically, it was this remark of Moreno’s about the late Marcos that was one reason Robredo decided to run for president.

The consolidation of the Marcos and Sara team surprised someone else and left him out – President Rodrigo Duterte.

With his dream team of Sara-Bong Go out of the picture, Duterte 1) blamed the Marcos camp for ruining his plans, and 2) left him without a presidential candidate to endorse because he trusts no one else. All these factors contributed to Moreno’s political calculation that the logical next step would be to pander to Duterte supporters. It’s a legitimate strategy, especially for gaining more momentum in Moreno’s weak spot: Mindanao.

University of the Philippines political science professor Aries Arugay said it’s possible that much of the support for Marcos in Mindanao is only “by proxy” – or conditional on their support for Sara. It might be possible to convince Sara voters not to vote her standard-bearer and choose Moreno instead.

“Marcos’ numbers in Mindanao are quite high but if it’s unnatural because it’s by virtue of the Sara Duterte pull, then therefore most of those voters can still be swayed,” said Arugay. 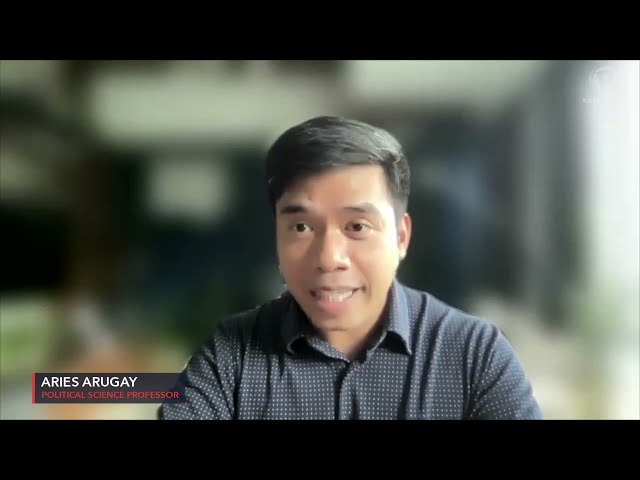 The Davao City mayor garnered a whopping 83% of voter preference in Mindanao, according to Pulse Asia’s January survey. In contrast, Marcos’ rating there was 66%. Still, this is stellar compared to Moreno’s 9% and Robredo’s 8%.

No wonder then that Moreno chose to launch his Mindanao campaign in Maguindanao where an Isko-Sara movement is gaining ground, egged on by the province’s second district representative Toto Mangudadatu and his side of the powerful clan.

It helps Moreno that President Duterte, whose approval and trust ratings in Mindanao are consistently around 90% or more, has not endorsed any presidential bet yet.

“Mindanao is a battlefront in the presidency because there’s no Duterte endorsement so there’s no overall general guidance on where the Mindanao votes should go,” said Arugay.

Sara is the “pivotal point of support,” he said. The younger Duterte herself has not publicly criticized Moreno or condemned the “ISSA” (Isko-Sara) movement. Indeed, being linked to Moreno could be advantageous to Sara for boosting her numbers in Metro Manila, where the Manila mayor is strong.

But Banayo insists the pro-Duterte messaging is “not really a strategy.”

Instead, he told Rappler it was borne out of three factors:

Moreno’s effort to become palatable to Duterte supporters is paying off in some ways.

Some of Duterte’s party mates in PDP-Laban have decided to support him. So have former Duterte officials and a nationwide volunteer group that helped the President win in 2016 (Mayor Rodrigo Roa Duterte National Executive Coordinating Committee). DDS blogger Banat By is now pro-Isko and has been defending him online.

Groups have come out declaring support for an Isko-Sara tandem, notably in the Visayas and Mindanao where Moreno is weak.

But there have been trade-offs too. Sergio Osmeña III, a former senator from a prominent Cebu clan, withdrew his support after Moreno vowed not to hand Duterte to the International Criminal Court (ICC). The ICC in September 2021 announced it was starting an investigation into Duterte’s drug war and killings linked to the notorious Davao Death Squad. Some former members of Moreno’s team were turned off by the direction of his campaign.

Many, especially supporters of Robredo, pan Moreno for proving himself to be a “political butterfly” who will do everything to win.

Some say this political agility is not doing Moreno any good, based on his third-place standing.

“On the one hand, that’s normally the logic of self-made people: you do everything to climb. But we also know that some people were able to surpass all these odds, all the difficulties in life with their principles intact,” said Arugay.

For Aksyon Demokratiko, the party Moreno joined to further his 2022 ambitions, the positions he has taken are acceptable.

Party chairman Ernest Ramel told Rappler that Moreno had discussed with party officials his positions on Duterte and the ICC.

“Yes, we talked about it. We agreed that, one, we should return to ICC and second, to welcome any probe that they conduct. However, we also agreed that our current justice system is functioning in a vibrant democracy, more so under a Domagoso administration,” he said on February 22.

“To this end, if President Duterte will face cases after his presidency, it is but fair that our own judicial system give him the trials in our own courts,” he added.

Aksyon also has no problems with Moreno saying he would continue Duterte’s drug war. Ramel said their standard-bearer doesn’t plan to continue every aspect of Duterte’s controversial campaign.

“Mayor Isko’s stance on the drug war is a departure from the current way. The drug war will certainly continue but the target is the supply,” he said.

Moreno does not condone extrajudicial killings and wants all suspects to have their day in court.

“As to the users, a rehabilitation approach and treatment should be the program to be adopted,” said Ramel.

But making “DDS” support a key aspect of one’s 2022 campaign strategy is spectacularly risky given the fickleness of the DDS principal himself.

Duterte is reliably unreliable, prone to turning on allies and walking back on his statements. Moreno need only look to his rival Marcos, who had once been described by Duterte as his ideal successor. And didn’t Duterte once praise Moreno himself as a “better” leader, only to belittle him for his sexy roles years later?

Perhaps Moreno is counting on Duterte’s own political agility in this high-stakes gamble. But Moreno should know that the President’s chief consideration is trust. How far will the Manila Mayor go to gain that trust?

Can Duterte himself trust Moreno, who has proven to be so politically flexible? Can a Duterte trust what many call a Duterte Lite? – Rappler.com