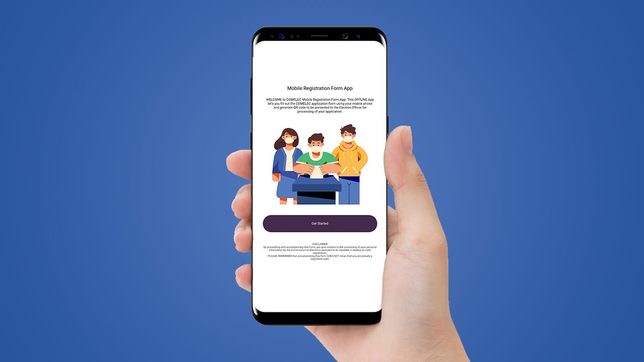 Facebook Twitter Copy URL
Copied
The Android smartphone app introduced by Comelec is not downloadable on Google Playstore, and cannot be used yet by voter applicants in Metro Manila and overseas

Netizens welcomed the Mobile Registration Form App – a smartphone application that seeks to speed up the voter registration process – launched by the Commission on Elections (Comelec) on Tuesday, June 15.

Once users successfully accomplish the voter registration form, the app generates a QR code, which they can present to their local Comelec office to have their biometrics taken.

“Besides being fast and hassle-free, this app does not require internet connectivity, allowing it to be accessible anytime and anywhere,” the Comelec says in its instructional video.

There are, however, some misconceptions about the app, from who can use it to how it can be downloaded.

The app does not work on iPhones. It can only be installed on Android smartphones.

Comelec offices in only 575 cities and towns nationwide are included in the pilot rollout, and have integrated the application in their operations. None of these areas are in Metro Manila or in foreign posts.

Therefore, even if Metro Manila residents and overseas voter applicants were able to download the app when it was still available online, they cannot just install it, use it, and go to the nearest Comelec office to present the QR code the app generates.

They are encouraged to instead use iRehistro, where they can fill out online voter registration forms and book a schedule for biometrics capture, as long as there are still slots in their localities.

2. No, it is not downloadable on Google Play Store.

When the app was launched on June 15, the app could be downloaded onto MediaFire, a file hosting and cloud storage service, until the Comelec took it down two days later.

In a statement on June 17, the poll body said the intention was “to prioritize its use in pilot areas identified by Comelec.” These are areas where internet connectivity is poor.

Comelec Commissioner Marlon Casquejo said the poll body “[did not] want applicants to look for internet connection to download the app.”

3. To get a copy of the app, voter applicants have to visit their local Comelec office.

The Comelec encourages users in pilot areas to visit their local Comelec offices and ask for a copy of the app. It will be sent to the voter applicant via bluetooth or SHAREit.

Once the app is installed on their phones, users do not need an internet connection to be able to use it. Just fill out the form, and it will generate a QR code that can be presented to the local Comelec office.

That sentiment echoed the observation of some netizens, who thought that having to go on-site just to download the app defeated the goal of using the app before they even visited their local Comelec offices for biometrics capturing.

Casquejo maintained that the voter registration process would still be hastened even if the registrant has to install the app on-site.

“[Under the traditional procedure], it will take the applicant just one hour to get the form because they have to fall in line in getting the form. And then filling out the three copies will take another 20 to 30 minutes,” said Casquejo, who was the election officer of Davao City before he was appointed to the Comelec en banc.

“And then, after that, the applicant will fall in line again for the biometrics, so it would take the applicant half a day just to [complete the process],” he added.

In contrast, using the app is equivalent to filling out multiple copies of the application form. It is unclear whether there will be a line for registrants securing a copy of the app. They will also have to fall in line for the biometrics capturing.

4. The Comelec asserts that the public’s data is safe.

The poll body insists that using the app will not expose a person’s data to hackers.

“All the information you input in the digital form is stored in an encrypted QR code. No data will be sent because it remains in your cell phone, so there is no possible way of a hacking incident or any getting of information, because it stays in your phone’s galleries,” Casquejo said.

The Comelec is not a stranger to data breach. In 2016, a hackers’ group accessed the data of the poll body’s website, exposing voters’ personal information and posting them publicly online.

For a step-by-step guide on how to use the app, watch the video above or take note of the following instructions:

The smartphone application was developed by Casquejo’s office, and did not undergo government procurement processes.

“Wala tayong ginastos ni piso (We did not spend a single peso) in creating this application,” he claimed.

Casquejo added that the app was created to boost voter registration months before the deadline on September 30, 2021.

The Comelec is targeting to have four million new voters for the 2022 national elections. On Thursday, June 17, Comelec deputy executive director Teopisto Elnas Jr. said that projection had been reached as of June.

There are also 60 million voters eligible to cast their vote in the May 9, 2022, elections. The number is just around two million shy of Comelec’s projection of 62 million voters.  — Rappler.com