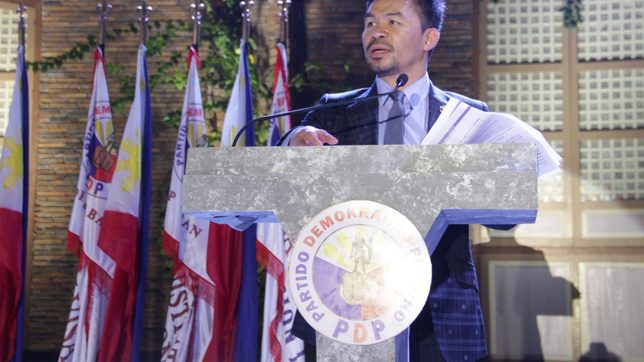 The event is largely virtual and is expected to start at 2 pm Sunday. PDP-Laban chairman Pimentel and party president Pacquiao will be conducting the national assembly via Zoom.

Initially, the national assembly was supposed to be a mix of physical and online events, but reporters were told on Saturday, September 18, that Pacquiao wanted them to “follow Inter-Agency Task Force protocols.”

In effect, with the current quarantine restrictions, mass gatherings are not allowed in the so-called “NCR Plus.”

The Pacquiao faction has yet to release Sunday’s program, but some 200 members who are part of its “voting delegate” would be voting on the group’s standard bearer for 2022.

What is expected to happen?

In previous assemblies held ahead of the filing of certificates of candidacy, the PDP-Laban typically nominates and officially endorses its national candidates for the upcoming elections.

For the 2022 elections, the Pacquiao faction is expected to nominate the senator as its presidential candidate.

The group will also be electing a new set of officers who will ratify resolutions adopted by its national executive committee.

Pacquiao has yet to officially signify his intention to run for president, but he said in a previous Rappler Talk that he would not settle for the vice presidency.

As for the vice presidential bet, PDP-Laban executive director Ron Munsayac earlier said that it would depend on Pacquiao’s decision should he accept the expected nomination.

In that same briefing, Munsayac said that the party has yet to finalize its Senate slate, but the candidates they are eyeing to support are incumbent and returning senators, media personalities, and some government officials.

The other faction led by President Rodrigo Duterte and Energy Secretary Alfonso Cusi already held its national convention on September 8.

The Cusi-led group is endorsing a Bong Go-Duterte tandem for the 2022 elections. Duterte accepted the nomination as the group’s vice presidential bet, but Go said he does not want to run for president. (READ: Will PDP-Laban survive Duterte?)

Both factions would still have to wait for the decision of the Commission on Elections as to which camp is the legitimate PDP-Laban. – Rappler.com