Over 1.6 million overseas Filipinos will begin voting for national candidates in the 2022 elections on Sunday, April 10, or a month ahead of the May 9 elections.

During the monthlong overseas voting, Filipinos abroad will be choosing their president, vice president, senators, and party-list groups.

Depending on their host country’s designated mode of voting, overseas Filipinos will either vote personally by appearing at Philippine embassies, consulates, and other official polling places, or vote via mail. (READ: #PHVote Guides: Where, when, and how to vote overseas)

Bookmark and refresh this page for updates from around the globe on the Philippines’ overseas voting for the 2022 elections.

The Commission on Elections (Comelec) might suspend overseas voting or even declare a failure of elections in Afghanistan and Ukraine due to unrest there.

During a House suffrage panel hearing on Wednesday, April 20, Comelec Director Sinoa Bea Wee-Lozada told lawmakers that Filipinos would be unable to cast their ballots in the two countries, where mandatory repatriation is ongoing.

Afghanistan and Ukraine have a total of 42 registered Filipino voters for the 2022 Philippine elections.

Amid OAV delays and irregularities, US-based Filipinos take matters into their own hands 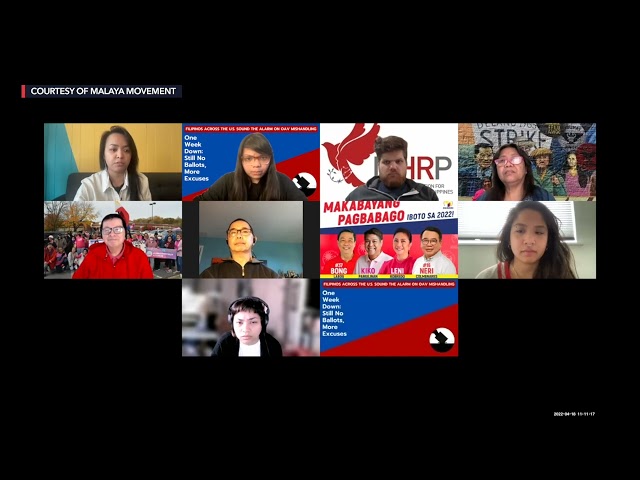 DFA: Many OFWs ‘eager’ to participate in elections

Department of Foreign Affairs Undersecretary Brigido Dulay reported to the Senate committee on electoral reforms and people’s participation that there was an increasing number of overseas Filipino workers (OFWs) who were “very eager to participate in the elections.”

Dulay updated the Senate panel on Tuesday, April 19, on the developments in the overseas elections. He said most Philippine posts have been opened to accommodate Filipino voters abroad.

Some Filipino groups still worry over the possibility of disenfranchisement as many Filipinos in areas with a postal mode of voting like in the United States have yet to receive their ballots. Filipinos abroad have 20 days left to vote.

The Philippine consulate in Dubai, United Arab Emirates (UAE) reported a “good turnout” on the first week of overseas voting.

Head of mission Consul General Renato Dueñas Jr. said that Filipinos come to vote during evenings because of the workweek but added that the consulate expected more people to come on weekends.

“We had a good turnout of voters for the first week of the overseas voting here at Dubai Philippine Consulate General’s Office. Since it’s a weekday, there were not as [many] people who came to vote during working hours but we are open to accommodating voters until 9 pm – cut-off at 8 pm, depending on the number of people in the waiting area. Some come to vote after work,” Dueñas told Rappler.

With a total of 290,182 voters, UAE has the biggest number of registered overseas absentee voters among overseas Filipino workers destinations across the globe. Dueñas said that Dubai alone has 191,779 Filipino voters, which is two-thirds of the total.

Citing Commission on Elections regulation, the consulate declined to provide figures on how many have voted so far. The United Filipinos in Hong Kong (Unifil-Migrante) welcomed the Philippine consulate in Hong Kong’s addition of five more polling precincts for the conduct of overseas voting in the special administrative region, the group said in a statement on Wednesday, April 13.

The post now has 10 precincts and respective vote-counting machines (VCMs).

“The prompt outcry of the vigilant members of the Filipino migrant community drew attention to the serious setbacks on the first day of voting, which resulted in this positive development in overseas absentee voting in Hong Kong,” Unifil-Migrante said.

The addition of five VCMs was a call the group had made in the days before the start of the overseas election. They flagged possible disenfranchisement because there were 10 VCMs in previous elections and initially five in the 2022 elections, despite registered voters in Hong Kong being at their highest ever in 2022 at 93,886.

“Our serious concerns were validated during the first day of voting. Snaking queues of OFWs wound up meters away from the Bayanihan Centre entrance. Reports from voters claim that they queued no less than four or five hours before they could vote,” the rights group said.

The Senate electoral reforms and people’s participation committee will request the Commission on Elections (Comelec) Office for Overseas Voting (OFOV) for an incident report following allegations of pre-shaded ballots in the overseas election, committee chair Senator Imee Marcos said in a statement on Tuesday, April 12.

“The electoral reforms committee will request a full report of the incident from the Comelec OFOV and thereafter determine if a hearing on the matter is warranted,” said Marcos.