MANILA, Philippines – Four vice presidential bets said that the P200 monthly aid from the government was not enough amid high fuel prices, as they offered actions that could be done by the incumbent administration.

Earlier this week, President Rodrigo Duterte approved a subsidy worth P200 per month for a year or a total of P2,400, with an estimated 12 million poor households to benefit from it. Economic managers admitted that the amount was not enough, but said that “this is what we can afford at this time.” 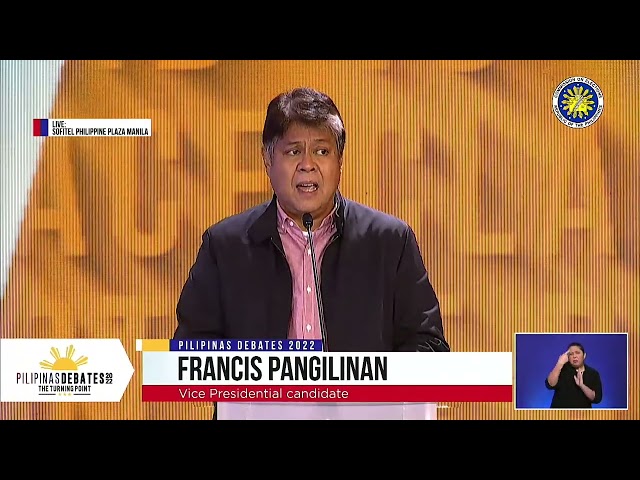 Bello on Sunday said: “Talaga hong parang binibiro lang tayo ni President Duterte with that ‘no kasi talagang ubos ho ‘yan isang araw lang ‘no.” (President Rodrigo Duterte is really toying with us, because the aid could be used up in just a day.)

For lawyer Rizalito David and economist Manny Lopez, the measly aid is “better than nothing.” Doctor Willie Ong, meanwhile, said that the amount could still help Filipinos.

So what should the government do? Sotto, Pangilinan, Bello, and David said that the government should suspend the collection of fuel excise taxes as a way to temper oil prices. David also wants the government to reduce the value-added tax (VAT) on oil.

(You already imposed [excise] tax on the price of fuel, then you tax it again after filling fuel tanks. What kind of policy is that? Two types of taxes for one product.) But for Lopez, it is not sound to suspend the excise tax on fuel, echoing the position of the government on the matter. Instead, Lopez appealed with oil companies to stop hiking pump prices, which is consistent with the position of the Department of Energy that the price hikes were driven by geopolitical events that are speculative in nature.

(If we suspend that, a huge amount [in potential revenues] will be lost. We might create a financial, fiscal crisis, which would have huge repercussions. But what I am pushing for is using moral suasion over oil companies for them to stop hiking the prices, because they do not have a solid basis to increase it.)

Bello, Lopez, Ong, and Sotto all said that the government should invest more in renewable energy. Lopez also said he would push for oil exploration.

Serapio, meanwhile, said that the government should implement what he called “energy relief.” Essentially, he is saying that consumers should receive subsidies if they want to produce their own energy. He was unable to expound, but it seemed like he was referring to measures such as installing solar panels at home.

Bello and Sotto also agreed that a wage hike was in order, given the inflationary effects of high fuel prices. Sotto proposed a P1,000 minimum wage for Metro Manila and between P600 to P800 for the regions. Bello, meanwhile, is calling for a P750 national minimum wage.

For the Senate president, a tax break is the answer to stop employers from protesting the wage hike. For Bello, the government committed a mistake when it lowered the corporate income tax. The former Akbayan representative also said that the government should freeze foreign debt payments and instead use the cash for social services.

On Tuesday, March 15, oil firms implemented their highest price hikes yet – raising diesel prices by P13.15 per liter and gasoline prices by P7.10 per liter.

Energy Secretary Alfonso Cusi has said that it may happen due to lower demand from China and talks between Russia and Ukraine.

Despite this positive development, prices remain high against last year. Since the start of the year, prices have increased by P20.35 per liter for gasoline, P30.65 per liter for diesel, and P24.90 per liter for kerosene. – Rappler.com