Candidates for the 2022 Philippine elections slug it out in the CNN Philippines Presidential Debate. 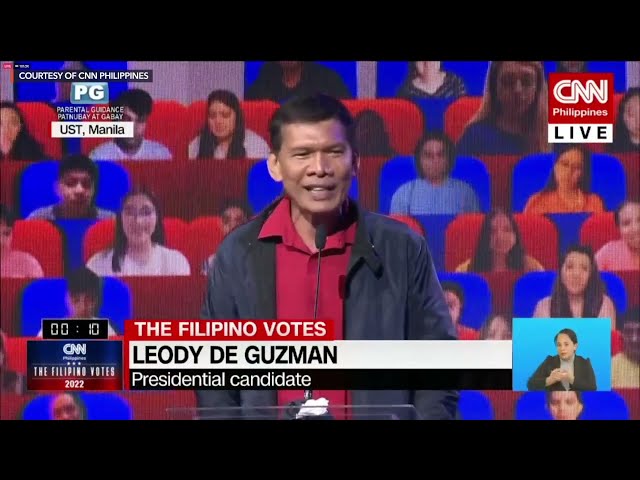 MANILA, Philippines – As of end-2021, the Philippines’ debt stood at P11.7 trillion, 20% higher than in 2020, as pandemic-related expenses ballooned and government revenues fell.

Experts said the next president will not have much elbow room to borrow, as lenders are closely looking at how fast economic recovery will be.

President Rodrigo Duterte is expected to leave the next administration with a total of P13 trillion in debt.

Candidates who attended the CNN Philippines presidential debate on Sunday, February 27, weighed in on the issue.

The lone candidate who was absent from the debate, Ferdinand Marcos Jr., is the son and namesake of dictator Ferdinand Marcos, whose regime sank the economy by borrowing $23.5 billion. A bulk of the funds were either pocketed by the family or given to cronies. Here’s what the candidates had to say during the debate:

Robredo said debt is not bad per se, but noted that the return on investments must be much greater than borrowings.

(We understand that we need to borrow big during the pandemic, but it will not be justified if the money would go to corruption. If I become president, I would ensure that we will be able to track where the money went, we will pay our debts, ensure that it will go to where it is supposed to go because it will be a disservice to the public if it ends up in other people’s pockets when they are the ones who will be paying.)

Lacson reiterated his stand that the national budget must be balanced and stripped of non-essentials.

(Based on a study by former deputy ombudsman Ramos, P700 billion from our national budget is lost each year due to corruption, and our unutilized funds, for the past 10 years, reached P328 billion on the average from 2010 to 2020. So, we need to have judicious spending.)

(Why is our projected deficit for next year P650 billion, but we will borrow double of that – P1.3 trillion? For three years, three budget deliberations, that has always been my question but there has been no response. Here’s a scenario: The father or man of the house has an income of P10,000 but expenses are P12,000. You’re only supposed to borrow P2,000 or borrow P5,000 so you have some money for investments and to improve your lives. But this one is double.)

Pacquiao said borrowing is only good for investments, but not to fund expenses.

He said he wants to dispose of non-performing or underperforming assets to offset debt servicing.

“So that, mga kababayan, ‘wag naman sa inyo nang sa inyo ‘yung pasa ng utang (my fellow Filipinos, debt must not always be passed on to you). Kumbaga ang gobyerno (In a government), sometimes you have to let go of these liabilities of the state to address a particular problem. And this will be the next challenging task of the next president,” Moreno said.

He said that while borrowing is needed, an audit should be done.

(Borrowing would be right, if the government is honest, we would be able to use the funds well. But we should fix the systems of our economy. If our economic systems are import-dependent, export-oriented, we would always be on the losing end. If we have low prices of exports, high prices of imports, we would really need to always borrow. So we have to develop our own industries.) – Rappler.com